Waymo and Jaguar are collaborating on 20,000 new SUVs that Waymo expects could make a million trips each day for its users.

Autonomous car company Waymo is about to gain another 20,000 electric cars to its fleet thanks to a new partnership with Jaguar. The Alphabet-owed Waymo will use Jaguar's I-Pace, an SUV that many have already noted is one of the best rivals to Tesla's growing 'ownership' of the electric vehicle market.

The I-Pace marks the second official car in Waymo's growing taxi fleet. The first I-Pace equipped with Waymo technology is set to go through public testing at the end of this year. It will be available to the public at the beginning of 2020 once testing is finalized.

Rather than outfitting a vehicle for self-driving technology, Waymo engineers collaborated with Jaguar's team throughout the I-Pace's development process. Thus, the 20,000 units added to the Waymo fleet will be unique to the autonomous driving service rather than the general market.

“Our ultimate goal is to provide a self-driving vehicle tailored to every trip and every purpose.”

“Our ultimate goal is to provide a self-driving vehicle tailored to every trip and every purpose,” said CEO John Krafcik on stage today at New York’s Chelsea Piers.

As Waymo described in a piece on Medium, the I-Pace is perfect for families who prioritize safety as well as single-person users who want a sleek ride. The company expects that the 20,000 I-Pace SUVs alone will be enough to give roughly a million trips in a single day.

"At Waymo, we’ve been building the world’s most experienced driver: a safe, skillful and savvy chauffeur that can take people and things from A to B at the push of a button," the company wrote. "Imagine a world where you can take a self-driving minivan to the baseball game with family, and a self-driving I-PACE home after a night out — in both cases, a car perfectly suited for your needs. That’s the world we’re building."

Currently, Waymo has Chrysler Pacifica minivans and prototype autonomous Lexus RX SUVs, but the RXs are being phased out and replaced with minivans.

Krafcik has also not held back his opinions regarding the recent death of 49-year-old Elaine Herzberg in Arizona after an autonomous Uber hit her as she crossed the street. The Waymo executive very boldly assured everyone last week that he had "a lot of confidence" that his company's technology would've stopped before hitting her. 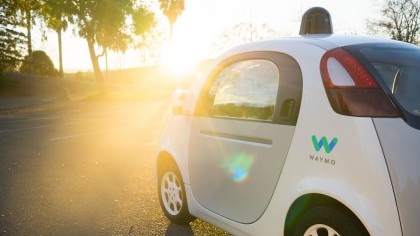 “All that we can say is based on our knowledge of what we’ve seen so far... and our own knowledge of the robustness that we’ve designed into our systems... in situations like that one—in this case a pedestrian or a pedestrian with a bicycle—we have a lot of confidence that our technology would be robust and would be able to handle situations like that one,” Krafcik said at the National Automobile Dealers Association in Las Vegas.

Waymo and Uber have a history with each other. Earlier this year, the two companies finally settled a trade dispute in which Waymo accused the former head of Uber's autonomous program of stealing proprietary data from Waymo. The settlement ended with Waymo receiving $245 million in equity from Uber.

Given Waymo's recent announcement with another on the way according to Krafcik, it's clear that the company hasn't let the trade dispute stop them.

Via: Waymo via Medium