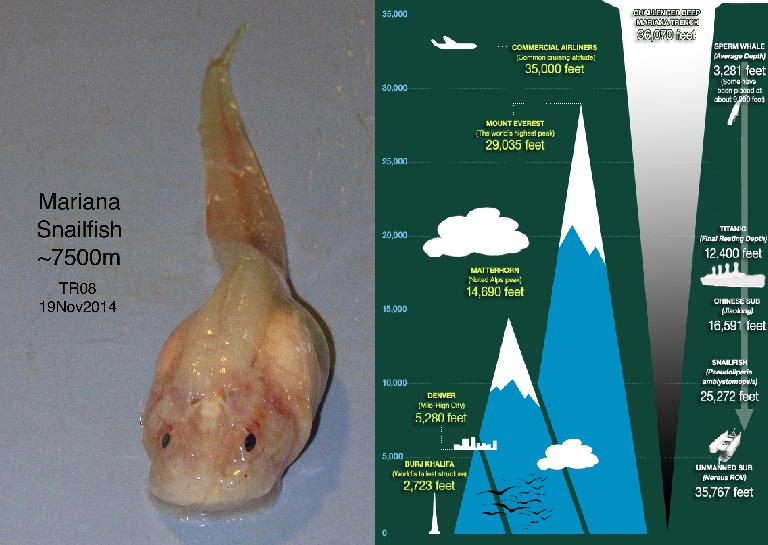 So what is at the bottom?

Essentially, no one is certain of the things that lie at the bottom of the sea. The oceans deepest darkest deep depths have proven more challenging to reach than traveling to the moon. In all of human history, 12 people have reached the moon, while only three have reached the bottom of the deepest part of the ocean: the Challenger Deep. The deepest point- located within the Marina Trench, reaches nearly 10,000 meters deep- beyond the depths which light can reach.

It was January 23, 1960, when a team of scientists set out to make the expedition to the bottom of the Challenger Deep. The engineers questioned whether the dive would be possible for humans to survive, backed by the most sophisticated engineering of the time- nevermind discovering any life.

The two to make the dive were Jacques Piccard and Don Walsh, veteran submariners ready to tackle the ocean's deepest depths. The sea was storming, yet the crew decided to go forth with the mission. Shortly after 8:00 am, the team started the dive. Soon, they would be faced with nearly 20,0000 tons of water weighing down on them, accumulating more than 1000 times the atmospheric pressure.

As the submarine approached the depth of 24,000 feet, they reached a depth no one else has ever before achieved. More than 5 hours later, the crew reached the bottom. To their surprise, however, they were not alone.

"Slowly, very slowly, this fish—apparently of the sole family, about a foot long and half as wide—moved away from us, swimming half in the bottom ooze, and disappeared into the black night, the eternal night which was its domain."

Said Piccard as he recalled the events of his dive.

At the depths of  Challenger Deep, it should be impossible for calcium to exist in a solution, leaving a great question into how the creatures sustained a skeletal structure. Further perplexing the scientists was the fact there was an absence of all light, similarly putting into question how lifeforms could possibly exist in such extreme environments.

The discovery led to the curiosity for more scientists to investigate potential life forms never before seen at the bottom of the Mariana Trench.  Since the 1960's, many more missions revealed further complexing creatures which dwell in the deepest regions of the ocean. Seemingly every dive which reaches the bottom prompts more discoveries.

One of the most sophisticated dives conducted with the research vessel Falkor which dropped off "landers" off of its side. Each lander contained high-tech cameras which witnessed new species emerge before it. The landers used air pockets encased in glass to provide both buoyancy control and an area for the camera to take clear images. However, a single crack becomes catastrophic as the tens of thousands of kilograms of pressure implode the structure, sending out a shockwave equivalent to that of a stick of dynamite.

Unfortunately, such an event occurred with two of the vessels which only one was able to be recovered. Nonetheless, the crafts were able to tape some of the most incredible footage on the planet, bearing witness to whole new species of fish and crustaceans.

One particularly peculiar discovery was that of an unknown variety of the species Snailshish, breaking records of the deepest fish ever recorded.

"We saw the deepest living fish ever recorded,"

Says Drazen, one of the scientists conducting the mission. He continues,

"[It was] definitely something new. We took one look at the thing and were amazed — big, wide, winglike fins, this eel-like tail and this scalloped face. It was very unique."

As stands, the current record for the deepest living fish, either caught or seen on video were discovered by the Falkor at depths exceeding more than 8,000 meters. The creature was an entirely unknown species of snailfish, hosting "broad wing-like fins, an eel-like tail and slowly glided over the bottom", according to Schmidt Ocean Institute. 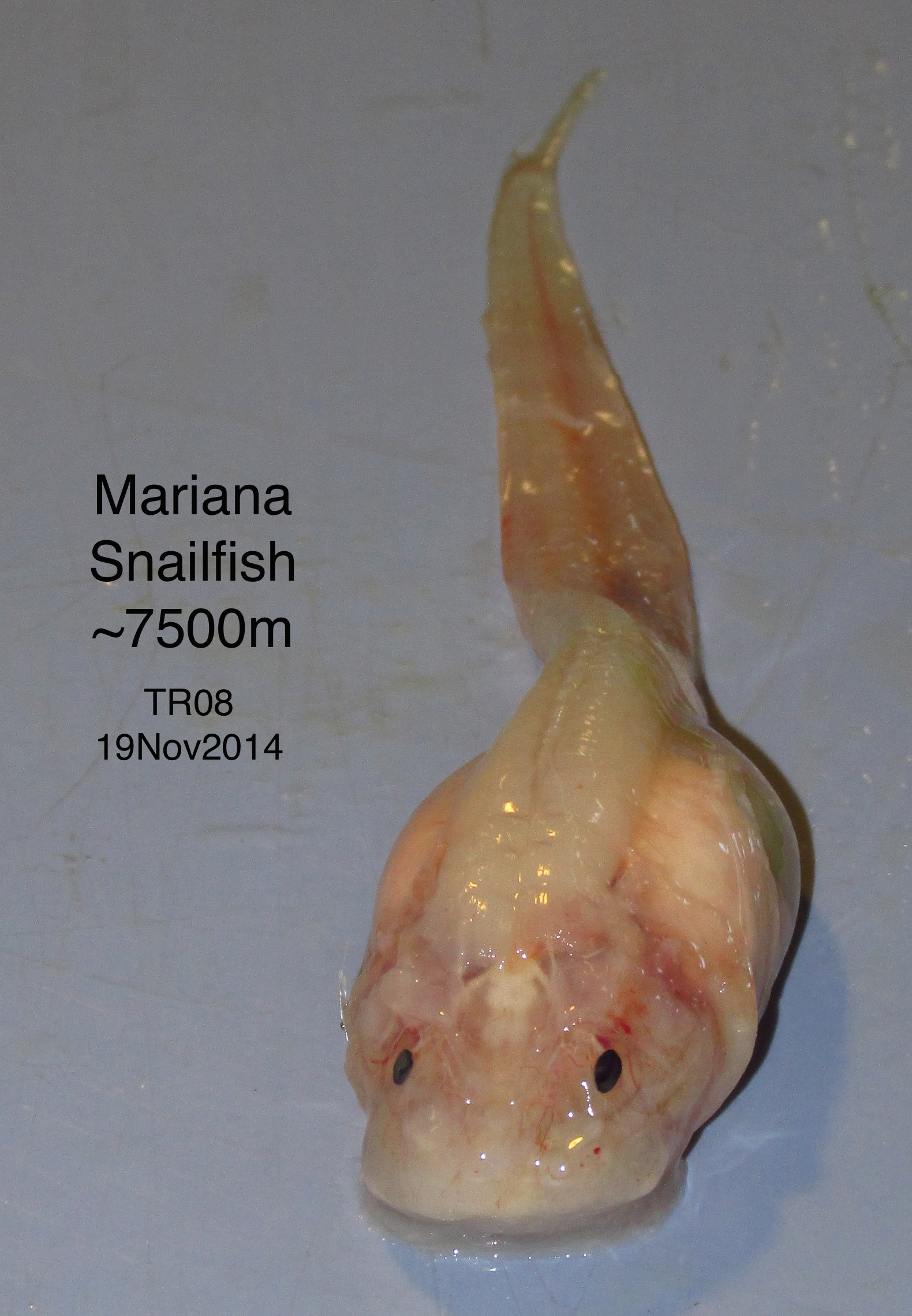 The landers carried with them small baited traps which drew curious fish closer to investigate the food, as well as capture some of the fish to be further examined at the surface. Unfortunately, none of the fish survived the decompression as they were surfaced.

However, the research led scientists to further investigate the techniques implemented in the fishes' biology which enables them to live- and thrive- at such extreme depths that would crush any other organism which lives on the surface. As it turns out, the fish are able to sustain thousands of times more pressure than atmospheric creatures through their unique use of the chemical trimethylamine oxide. The chemical allows the cells within the creatures to remain flexible, protecting them both from pressure and from being penetrated by saltwater.

Further evolutionary characteristics include the creatures peculiar ways of navigating. Light does not reach the trench, resulting in the fish to utilize other techniques in order to hunt or avoid preying animals. While each species is different, the creatures predominantly use a few methods to navigate including gathering luminescent bacteria, using echolocation, or detecting changes in electrical fields.

Curious about other life which may live even deeper, the researchers decided to investigate the sediment at the bottom. The sediment is largely comprised of decomposed marine life which continuously floats down to the bottom, closely resembling snow. Digging into the sediment revealed even more lifeforms.

Paul Yancey, a team biologist from Whitman College commented on the discovery, saying

"It's looking like there's a lot more life down there than we thought. You know, this is so far from sunlight that people thought there wouldn't be a lot of life down there, but there is."

Fish have been adapting to extreme conditions for millions of years. Some aquatic life forms have even adapted the ability to live beside hydrothermal vents which approach 103 degrees Celcius. The vents are far below the depths which sunlight reaches. Instead of deriving energy from light, microbes oxidize certain materials (including compounds like hydrogen sulfide in volcanic gasses) in a process called chemosynthesis which provides the carbohydrates, enabling the creatures to thrive. 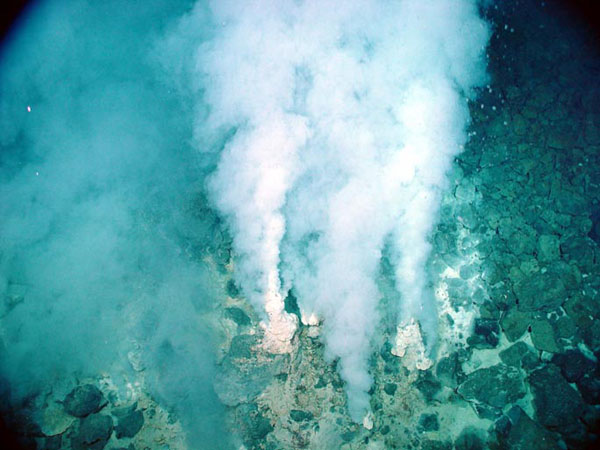 The findings have further developed humanities understanding of life, extending the knowledge of where life can exist- even under the most extreme of conditions. Life at the bottom of the ocean is unlike any other lifeform; it must adapt the extreme pressures, temperatures, and lack of oxygen, among other complications.

The ocean remains largely unexplored, leaving scientists with more knowledge about the lunar surface than what lives at the bottom of the ocean. However, the small 5% which has been investigated has revealed some of the most fascinating discoveries.

“In that 5% we have some of the most amazing things on this planet. We’ve got a mountain range, the Mid-Atlantic Ridge, that has thousands of peaks taller than the Alps are, for instance,"

"You’ve got, every time someone goes down, new species that are wondrous and unbelievably strange sometimes. And in reality, if you take all of the world’s oceans, that’s 99% of our living space on Earth, and we know almost nothing about it."

Scientists Just Drilled the Deepest Hole at 26,200 FT Below the Ocean