What Keeps Spaceships from Burning Up During Reentry ?

Thanks to engineers and scientists, it is now possible to survive a fall while burning up at thousands of degrees during atmospheric reentry.

Getting astronauts into space challenges engineers with unprecedentedly difficult problems. Though the spacecraft may have been proven during the launch and duration of space exposure, it must still endure one of the most demanding challenges of all: reentry. At the end of a mission, spaceships re-enter the Earth's atmosphere as they travel in excess of 30,000 km/h. The tremendous speed of the reentry vehicle compresses the air below into a hot ball of plasma which encircles the craft.  Getting the astronauts home safely will require protecting them from the heat as it reaches thousands of degrees.

The dangers of reentry

Archeologists have long understood that asteroids burn up as they fall through the atmosphere. The fact instilled fear into scientists for decades as they wondered about the possibility of engineering a vehicle strong enough to withstand the perilous environment that reentry creates.

One of the greatest challenges imposed on aerospace engineers is developing a thermal protective material which does not become compromised, even at temperatures as high as 1,700-degrees Celsius.

A variety of Thermal Protection Systems (TPS) is employed to prevent spaceships from preemptively burning. The heat shield is a reentry vehicle's primary defense against the intense heat experienced as they fall through the atmosphere.

One of the hard-learned lessons of reentry was during Columbia's fatal flight on Feb. 1, 2003. During the launch, a large piece of foam about the size of a briefcase, tore loose and caused some damage to a heat shield panel on the left wing. The mission proceeded as usual until disaster struck during reentry. Superheated plasma penetrated the compromised wing and quickly burnt its structure. Unfortunately, the Columbia began an uncontrollable tumble, causing it to disintegrate. Seven astronauts lost their lives that day.

However, the unfortunate accident would force NASA to redesign the Space Shuttle. More than a decade later, NASA is implementing the lessons learned on its new ship, Orion.

Early manned spacecraft including Mercury, Gemini, and Apollo, could not be maneuvered during reentry. The space capsules had followed ballistic re-entry trajectories before they plummeted into the ocean.

The Apollo moon missions posed a great engineering hurdle since the capsules, as they returned from the moon and enter the atmosphere at more than 40,000  km/h. The heat shield was able to ablate or burn the char layer controllably to protect the underlying layers. Though the heat shield was effective, there were some critical drawbacks.

The shields were heavy and were bound directly to the vehicle. Moreover, they were not reusable.

Perhaps the most impressive thermal protection system (TPS) belongs to that of the Space Shuttle orbiter. The Space Shuttle program required an entirely redesigned heat shield. With an incredibly long design life of 100 missions, its insulation not only had to perform well but also needed to be reusable. Its engineering success will provide the innovative technologies which will carry into the next generation of space programs.

In space, the Orbiter would circle the world every 90-minutes. The time from day to night would see temperature fluctuations of -130 degrees Celsius to nearly 100-degrees Celsius, let alone the temperatures of reentry.

Though there exist many materials which are durable enough to withstand the forces of reentry, not many can withstand the heat. During reentry of the Orbiter, its external surfaces reached extreme temperatures of up to 1,648°C (3,000°F).

Despite the extreme heat experienced by the TPS, many systems work together to maintain the Orbiter's outer skin at under 176°C (350°F). Although the external components may be able to survive hundreds of degrees, the aluminum airframe can only withstand temperatures of up to a maximum of 150°C. Temperatures much beyond the threshold will cause the frame to become soft and compromised as a result. The thermal protection systems in place ensure the airframe does not exceed the thermal limit.

The materials used to keep the Orbiter cool

Different parts of the aircraft experience different temperatures and therefore require different materials. The parts most exposed to heat, including the nose and underside of the Orbiter, are made from the most thermally resistant materials. The leading edges require an additionally reinforced carbon-carbon coating on top of the high-temperature insulation tiles.

Other areas, including most of the fuselage, were covered in advanced flexible and reusable insulation blankets. 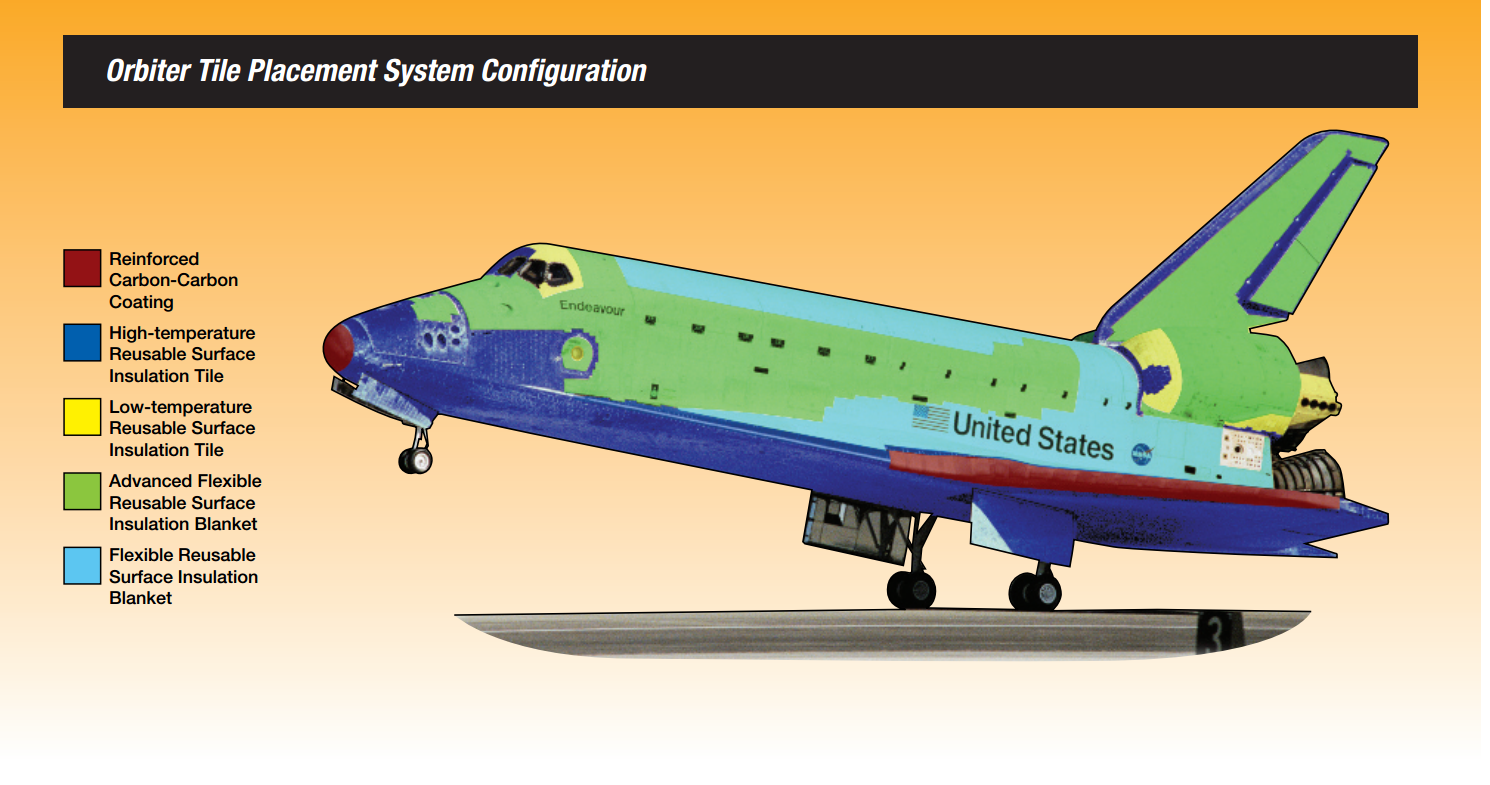 All components which come into contact with the outside are covered in high emissivity coatings to ensure the Shuttle reflects off most of the thermal heat. Though, the difference in color plays a vital role as well.

Black and white tiles, while similar in composition, perform different tasks during reentry. The white tiles on the upper surface of the material retain a high thermal reflectivity (a tendency to absorb minimal heat). The black tiles are instead optimized for maximum emissivity which allows them to lose heat faster than white tiles.

The tiles which take much of the brute force during reentry are made of silica aerogels. The material used on the underside of the Orbiter (known as LI-900) is 94 percent by volume of air making it incredibly light. The tiles are specifically designed to withstand thermal shock. An LI-900 is capable of being heated to 1200 degrees then take a plunge into cold water without sustaining damage. Though, optimizing the tiles with a low density and high shock resistance lead to a compromise in its overall strength.

Though astronauts have not visited the moon in a while, and though the space shuttle program has since been abandoned, astronauts routinely visit the ISS to perform experiments and repairs. Though the spaceships have changed, the technologies which bring them back home retain the same principles.

NASA's current magnum opus is their revolutionary Orion spacecraft. NASA promises the spacecraft will take humans farther than ever before, including Mars. Although, the new spacecraft required a total overhaul of its reentry systems.

While the Space Shuttle has remarkable TPS, engineers have largely abandoned the idea of reusable thermal shields in favor of cheap, easily manufactured single-use tiles.

The Orion capsule will not glide in as the Space Shuttle once did. Instead, parachutes are used to ensure a safe return to Earth. Orion's crew module is designed to reenter at speeds of more than 40,000 km/h.

How the Orion survives reentry

The large surface area of the bottom of the capsule works to take the blunt of the force. Like the Apollo reentry vehicles, Orion's heat shield is engineered to ablate (controllable burn). The shield is aerodynamic enough to maintain a stable flight path, yet blunt enough to slow the descent to a speed of just 500 km/h. 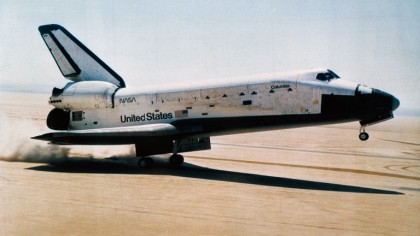 After achieving a reasonable rate, several small parachutes just over 2 meters in diameter slow the aircraft by only 30 km/h.  From there, a series of large parachutes with diameters of 7-metres are deployed to slow the capsule to 200 km/h just 3-kilometers above the surface of the Earth. Finally, three massive main parachutes with a diameter of 35 meters each slow the rate of descent to a survivable speed. Though the landing is not pretty.

However, it is through the hard daunting work astronauts perform today that will advance humanity to make the next giant leap. Soon, missions will take humans far beyond the reach of the Earth to explore otherworldly planets.

What To Expect From Additive Manufacturing in 2021