In what could've been an incredibly dangerous experiment, international researchers put a crocodile into an fMRI scanner and played classical music to see how it would react.

This experiment is certainly one of a kind. Researchers recently put an adult Nile crocodile into an MRI scanner to see how the reptile's brain reacted to complex sounds like classical music.

Crocs are some of the most important reptiles in the world. They're the largest reptiles found in Africa, Asia, throughout the Americas and in Australia. There are 13 unique species of crocodiles, with the smallest species growing to 5.6 feet and some of the largest coming in at over 20 feet in length.

These cold-blooded carnivores are also some of the oldest animals on earth. The Crocodilia order existed over 100 million years ago in the Mesozoic era, and they continue to thrive at the top of most tropical food chains. So why study these ancient creatures? According to the researchers, it's because they've changed very little in the course of nearly 200 million years, yet no one has thought to conduct this experiment before. 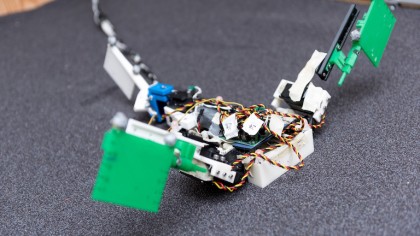 "Analyses of crocodile brains thus provide deep insights into the evolution of the nervous system in mammals and may help us understand at which point certain brain structures and behaviours associated therewith were formed," explained research team lead Felix Ströckens from the Department of Biophysiology at Ruhu-Universität Bochum (RUB).

The team included researchers from Iran, South Africa, France and Germany. All hands were on deck to develop a way to get accurate (and safe) readings from a massive crocodile subject. The researchers opted for a functional MRI (fMRI) which is often used in clinical research and diagnostics. fMRIs note the slightest changes in brain activity, and often those experiments have a subject alternate between periods of doing a task and then reaching a control state. The data from an fMRI then is analyzed to see what exactly happens in particular sections of the brain during those distinct periods.

"In the first step, we had to overcome a number of technical obstacles," says research team member Mehdi Behroozi. "For example, we had to adjust the scanner to the crocodile's physiology, which differs massively from that of mammals in several aspects."

The crocodile could've easily ruined the study's success, so the researchers breathed a sigh of relief when the animal didn't fight the fMRI machine.

“Fortunately they seemed to like the scanner tube and did not move at all, which would have ruined our study,” said Ströckens in an interview with Gizmodo. “We had to be very careful, since an angry crocodile could have easily damaged the scanner or injured us—even when they are only one year old, they have pretty strong jaw and tail muscles. But everything went fine and neither we nor the animals got injured.”

Once safely inside, the researchers exposed the crocodile to the music of classical composer Johann Sebastian Bach. While the croc was listening to Bach, the researchers measured how its brain reacted to more complex stimuli like classical music rather than the simple sounds found in nature.

The team discovered that crocodiles -- some of the oldest types of creatures on earth today -- have very similar patterns to mammals and birds in their responses to complex noises. The team also theorized that the fundamental processing mechanism for such sounds come from a very early evolutionary stage, as most vertibrates seem to have similar reactions.

What Happens When a Superconductor Meets Ferromagnetic Fluid