Here are the most important things we need to be teaching robots, according to the experts working with them.

We've reached a critical point in the development of robots. As robots become more and more common in our everyday lives, scientists and researchers are beginning to ask if we're adequately preparing the machines for co-existing with humans.

If we're to live peacefully alongside robots, and if robots are to reach their full potential, there are certain lessons they'll need to be taught. Here are just some of the lessons robots need to learn, according to the experts currently working on cutting-edge machines.

1. “We have to be able to give them goals and have them generate behavior on their own.” - George Konidaris

Teaching a machine to live alongside humans means that nothing can be taken for granted, no matter how obvious a certain set of information might seem. It's imperative to give robots the capacity to understand the world in which they operate in the most basic sense.

That's why Brown University's George Konidaris is concerned with creating robots who can interact with the world around them, and learn through action rather than pure coding.

Brown and MIT have worked together on a project that saw a robot using basic motor skills to learn to solve problems. This research could be key in creating robots that can complete a variety of tasks, without the requirement of specific programming to facilitate each task.

2. "Research on robot hugs is important so we can one day use technology to provide the emotional support and health benefits of hugs to many people, wherever or whenever they need it." - Alexis Block

Robots need to learn how to hug. At least, that's according to Alexis Block, who recently co-authored a study on the use of robots as emotional support for humans. Block worked on the HuggieBot project, which saw the development of a robot that could provide affection and comfort.

It might sound silly, but there's a wealth of science backing up the importance of hugs. Regular physical affection can lower blood pressure and increase levels of oxytocin. A huggable robot would be of great benefit to the elderly and those living alone.

3. “This line of work could facilitate true robotic personal assistants in the future.” - Qiao Wang

We all hope that someday robots will make our lives easier. How great would it be if a robot did all your chores for you? That's exactly what Qiao Wang, from the Arizona State University, has been working towards.

Wang believes that robots should be taught to recognize and replicate chores by observing human activity. Rather than having specific chores programmed, the robots could then focus on specific tasks and adapt as needed. Wang is of the opinion that this is the best way to develop robots that can help us in the home.

4. “If the robot could touch the object, have a notion of tactile information, and be able to react to that information, it will have much more success.” - Maria Bauza

Winner of the 2017 Amazon Robotics Challenge, and current MIT PhD candidate Maria Bauza, believes that tactile learning is a must when it comes to the development of robots. Bauza stresses the importance of robots being able to feel and gather tactile data from the objects they interact with in order to successfully navigate the world around them.

This belief forms the core of Bauza's work, which seeks to develop machine-learning algorithms with an aim towards allowing robots to glean information from their surroundings. Research like hers is key towards giving robots an understanding of objects they come in contact with, with which they might have no prior experience.

5. "Our goal is to develop methods and metrics that would enable autonomous systems to assess their own performance." - Professor Holly Yanco

If robots are to become a permanent fixture in our society, they'll require a great deal of maintenance in order to stay in top condition. For this reason, it's important to teach robots to self-diagnose any issues, and to be aware of any mistakes they make. Professor Holly Yanco, from the University of Massachusetts Lowell, believes that robots must be taught to self-assess.

Yanco is currently leading a project called SUCCESS, which stands for Self-assessment and Understanding of Competence and Conditions to Ensure System Success.

The 5-year project aims to study the behavior of robots across a variety of given tasks, and collect that data and implement it in the next generation of smart, self-assessing machines.

6. "You'd like the robot to be able to explain why it can or why it can't do a task." - Aaron Steinfeld

Aaron Steinfeld, of the Robotics Institute at Carnegie Mellon University, is on the same page as Yanco. He considers self-assessment, and even self-criticism, as a much-needed lesson to be taught to robots.

It isn't enough for robots to complete repetitive tasks satisfactorily. They need to understand why their actions resulted in a satisfactory outcome, and whether or not different actions could result in a better outcome. By reflecting on their own actions and gaining the ability to consider a variety of scenarios, robots will become more useful and effective.

7. "This work combining EEG and EMG feedback enables natural human-robot interactions for a broader set of applications than we’ve been able to do before using only EEG feedback." - Daniela Rus

One of the most important tools at our disposal when it comes to teaching robots will be their interactions with humans. Rather than relying on detailed and time-consuming coding, robots will be able to observe and interact with humans in order to learn the tasks required of them.

Daniela Rus, director of MIT’s Computer Science and Artificial Intelligence Laboratory, believes that we're closer to teaching robots effectively than ever before, thanks to recent MIT experiments where a robot learned by reading a human's mind. The robot was able to detect brainwaves from its human companion, who was fitted with an electroencephalography cap. This allowed the human to wordlessly and effortlessly guide the robot, allowing it to learn how to properly conduct the task at hand.

8. "People talk about human robot collaboration but in the end there’s still a separation; they’re not really working close together." - Dr. Juergen Gall

Dr. Juergen Gall, of Germany's University of Bonn, believes that robots must learn to predict future obstacles if they're to adequately care for humans. 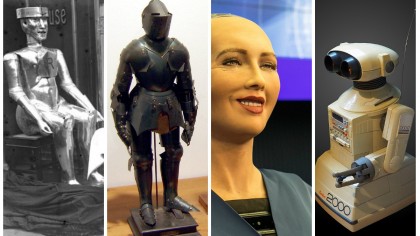 He's been involved in the development of software that can predict a series of events 5 minutes before it occurs, with up to 40% accuracy.

Though it might not sound like a roaring success, this marks a huge breakthrough in machine learning. This would allow robots to quickly and effectively plan a course of action for any eventuality, allowing them to act with the best interest of humans in mind.

Gall believes that technology like this will be of the utmost importance when it comes to developing robots to care for the elderly.

One of the major issues of developing robots and artificial intelligence is the question of ethics. How do we teach robots to recognize right from wrong, and how do we prevent our own latent biases from corrupting the neutrality of the programming?

James H. Moor is a philosopher whose work has dealt extensively with such questions. Moor maintains that teaching ethics to robots is of the utmost importance, but that robots must also be capable of justifying their actions should they come into conflict with human ethics.

Ensuring that robots are acting in the best interests of humans, and that they understand and accept human ethics, is absolutely necessary.

10. "We need the robot to be able to continuously improve from its own experience." - Sergey Levine

For many, it's not a question of what robots learn, but rather how they learn. Sergey Levine, an assistant professor at UC Berkeley, believes that robots must be given the ability to learn from their experiences and improve upon their core programming.

Levine has been working on a series of experiments in which robots learn through interacting with unfamiliar objects, and through observing the actions of humans.

Experiments like these illustrate that robots could potentially continue to learn and improve over time as they encounter new situations and experiences.

11. "How do you ensure that an artificially intelligent agent–be it a robot a few years from now or a much more capable agent in the future–how do you make sure that these agents optimize the right objectives?" - Anca Dragan

If we're to co-exist peacefully with robots, robots will need a crash course on human values. This is exactly the kind of work Anca Dragan engages in, in her position as principal investigator with UC Berkeley’s Center for Human-Compatible AI. Simply put, she's concerned with teaching robots right from wrong, so that they can avoid any nasty faux pax in human society.

Another thing that concerns Dragan is the idea of bias, and how it's imperative for us to prevent biases from being taught to robots. For her, it's a matter of striking a balance between teaching what constitutes appropriate behavior, and allowing the robot to remain socially neutral.

12. "If the robot sees the first two or three steps, it can tell us what the next 10 steps are. At that point, it’s basically thinking on its own." - Ashwin Dani

Ashwin Dani from UConn is engaged with some of the most ambitious robot teaching around. He's working to teach robots to think, allowing them to understand the next steps of a process that they haven't seen before.

Dani's research involves having a robot observe a human complete a task. Through careful observation, they learn a certain set of steps within a process, which they then learn to finish based on the information already at their disposal. This would drastically reduce the amount of time and labor necessary to program industrial manufacturing robots, and also provide a massive breakthrough in machine learning and intuitiveness.

13. "What we want is that you get active data as you interact with the objects." - Dhiraj Gandhi

Another researcher hoping to teach robots about the world through physical interactions is Dhiraj Gandhi, from Carnegie Mellon. Just like human infants learn about their surroundings through explorative physical interactions, Gandhi believes this method of teaching is also useful for robots.