What Will Eco-Friendly Cities of the Future Look Like?

If cities of the future use half of the sustainable energy capabilities we have today — or are in the process of inventing — we will be living in the future.

Sleek panels glimmering in the sunlight; large, lazily-spinning wind turbines rising high above the plains; silent electricity flowing through car engines. Sustainability has found a strange place in our world, riding a thin line between practicality and science fiction. Though entrenched energy industries have stalled our crawl towards energy independence, new and fascinating innovations emerge each year, inevitably tugging us into tomorrow.

All whimsy aside, sustainability is cool. Unfortunately, it has been relegated to limited or individual use thus far; there are no major cities powered primarily through sustainable energy sources. This will eventually change, and many of us are curious to see what path future ecocities will take. The shift will probably be a slow transition and may take many decades. Noting this, it's likely there will be new and fantastic inventions by then, and everything else is speculation.

Thirty years ago they thought we'd have flying cars. I won't go down that path: if cities of the future use half of the sustainable energy capabilities we have today — or are in the process of inventing — we will be living in the future.
Given that, here are a couple urban implementations you should watch out for:

Small, automated aircrafts get a lot of bad press for their use in military and paramilitary operations around the world. However, personal use of drones has blown up in the last decade, with people using electric flyers for photography, video, and the pure joy of operating a sweet piece of machinery through remote control. 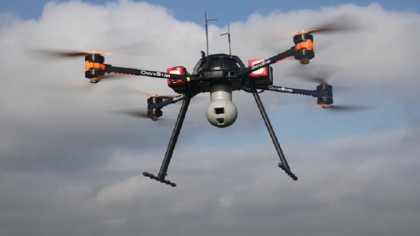 16 Common Ways Drones Are Being Used in Everyday Life

Here’s the thing: drones are still comparatively expensive, unreliable, and inefficient for anything but military-funded operations and personal kicks. Battery life and low carrying capacity have blocked drones from being used in commercial settings, as have the high costs of initial purchase and repairs.

Still, personal drone use a few years ago would have seemed like a pipe dream: a ton of improvements in design, affordability, and reliability have evolved in a very short period. If this trend continues, drones could start being used widely for delivery and courier roles within cities.

Electric power gives drones a distinct advantage over traditional delivery vehicles, as does being able to avoid traffic jams and other slowdowns. Expect a lot more air traffic in the coming years.

The main obstacle facing solar energy viability is the ability to efficiently and sustainably store the energy generated. In most cases of personal use, a house's electric meter will run up during the night, and then run down during the following day as solar energy flows into the grid.

Obviously, in urban life, personal panels are not possible. This does not necessarily present a problem, as some cities have begun sourcing sustainable energy from solar and wind fields hundreds of miles away.

Keeping energy local is preferable, as it costs less and doesn't require being run through a middleman. Producing power within the city limits lowers the cost of electricity within the city enormously. Look forward to many more solar panels cobbled in and around cities.

Use of wind power has actually led solar as a source of urban energy around the US. Cities like Georgetown in Texas have made transitions to full sustainable energy, mostly on the back of wind farms. The main advantage of wind power is, of course, its relative consistency next to solar. While storing the energy can still be tricky, the contributions to an electric grid by wind power are constant, day and night.

Wind is at a distinct disadvantage to solar within cities, however. Whereas solar panels can be placed anywhere with a direct line of sight to the sun, turbines are a practical impossibility within the urban sprawl.

Using proxies for energy production can make the process a lot easier and tidier. It is entirely possible cities will become like the feudal city-states of the past, instead of leasing out land surrounding the metropolitan sprawl to wind farms.

Transport of goods is one thing, public transit is something entirely different. Everyone hates the bustle and traffic of big-city streets, and the crush of subways and trains isn’t much better.

Some cities have been looking to change this ecologically. One unlikely metropolis in the Arabian desert — ironically founded on oil revenue — has dug formidable subterranean tunnels and uses an armada of electric cars to ferry people to different parts of the city.

Classic gas-powered taxis seem to be going by the wayside: with some cities attempting to reach zero emissions within the next few years, there is little place for public or personal gas vehicles. Electric trains and subways will stick around —even expand, in some cases — and it’s entirely possible the taxi system will merely switch to electric vehicles.

I, for one, hope to see underground electric vehicles in every city.

Cities are going to greener. Literally. Greenery — trees, in particular — are being utilized in many cities as a means to neutralize carbon emissions. Public parks have the dual purpose of lowering atmospheric carbon levels and being aesthetically pleasing.
The locations of some cities can't support classic greenery, however. Maintaining green flowering plants requires a tremendous amount of water, something desert cities often lack.

There has been a recent push in many of these cities —in particular, Los Angeles — to put a greater emphasis on locally-growing plants. Cacti, in particular, have begun popping up — both inside and in gardens — and are deceptively excellent at absorbing carbon dioxide in the daytime and releasing oxygen at night.

In the next couple years, expect to see a lot more traffic in the air and a lot less on the streets. Wind and solar emphasis — especially if conservative Texan cities lead the way — may see a greater abundance of wind and solar farms in the greater metropolitan area. Just as likely, energy sourcing to rural locations hundreds of miles away could mean the exact opposite.

Most of all, expect green. City parks will begin expanding, as well as forested areas around the cities. Carbon reduction and sustainable energy is the way of the future. The question is not whether the energy revolution will happen, but when.