What Exactly is Inside a Rattlesnake's Rattle?

There are few things worse to hear in nature than a rattlesnake's rapid rattle. But what's inside the rattle itself?

Snakes, why did it have to be snakes?

The slithering serpents have woven their way through countless cultures, becoming (typically) feared in each one. Few snakes have more infamy than the rattlesnake.

But how do rattlesnakes get their namesake rattle sounds?

The YouTube channel What's Inside? purchased a rattlesnake rattle and decided to give it a go. Grabbing a stylus, he cuts down the middle of the rattle only to discover that there isn't anything inside.

He explains that when a snake is born it only has the first part of the rattle, known as the first button or pre button. Days later, the first skin is shed and replaced by the ‘button’. After each change, a new button is added, and all articulated, allowing the movement and the sound of "rattling". This means that it develops its signature tail from an early age, basically while it's still a baby.

In other words, the interlocking rings in the rattle knock against each other to produce a buzzing sound when the snake holds its tail vertically and vibrates the rattle. Each time a rattlesnake sheds its skin it adds another segment to the rattle.

The Basics about Snakes

Snakes’ are elongated, legless, carnivorous reptiles feeding on birds and rodents. They are found on every continent except Antarctica. There are more than 3,000 species of snakes in the world. Snakes are usually harmless and can be helpful to humans, as the vast majority are non-venomous.

Rattlesnakes belong to Viperidae family. They are about 30 species ranging in size from 1 to 7 feet and they live for 25 years.

The venomous animal is native to Americas. You will easily find them in the wild with Mexico and South U.S. being the most common living habitats. Rattlesnakes can be found in open, rocky places almost anywhere in the United States. Arizona is home to 13 species (such as the black Arizona rattlesnake) more than any other state.

One of the most interesting facts about rattlesnakes is that they have very developed social and parenting skills, which is unusual for reptiles. Parents take care of their young together.

According to the San Diego Zoo, they are considered to be the most recently evolved snakes in the world, which has relatively heavy bodies (4 to 10 pounds) and diamond-shaped heads. Rattlesnakes have either a rattle or a partial rattle made of interlocking rings, or segments of keratin, the same material our fingernails are made of.

How to Avoid a Snakebite

We’re afraid of being bitten, but remember that snakes bite to defend themselves. If sensing danger, they first try to escape or hide. Different rattlesnake species react in different ways: some remain still, relying on their cryptic coloration for camouflage, while others just glide away silently. 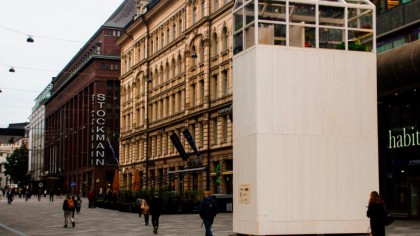 If this isn’t an option, they hiss, rattle their tail, and puff up their body to ward off an enemy. Biting is the last resort for a rattlesnake. When a snake rattles it actually protects other animals from being bitten while at the same time protecting the snake from being stepped on! It is an extremely effective and highly evolved predator-avoidance system.

However, The Santa Catalina Island rattlesnake has no rattle, just a small button! It climbs trees and sneaks up on its bird prey, which is easier without a noisy rattle. In addition, Rattlesnakes have triangular heads which makes an important identifying feature in case the snake has lost its rattle.

Just remember to watch your step, especially when walking out in heavy brush or rocky areas. If you hear a rattling sound, don't be stubborn; it would be a good idea to back off. Also, before you travel to a wild area learn more about local medical facilities and how to reach them.

If a snake does strike at you, you need to seek help immediately. Quick response will be a difference between life and death - human will succumb to venom between 6 and 48 hours after the bite.

Have in mind that the amount of venom snake releases depends on several factors such as size and health of the fangs, whether it has full venom sack, its temperament, whether it was scared for its life or was deprived of food and water. In some cases, a snake will not release its venom; the attack will only serve as a warning.

In order to treat venom, a person has to take an anti-venom shot. The process is based on collecting venom from species such as eastern diamondback and western diamondback.

Tell us more in the comments below!

Leave your email address if you wish to receive a periodical newsletter from our site!

Combining Art and Crypto: What Is This NFT Hype All About?

What is Engineering? A Brief Overview

What Microwave Technology Is and How It Works

Physics 101: What Is Higgs Boson and Higgs Field?