High-temperature superconductivity could be one step closer thanks to the work of an international team of physicists. Studying spatial correlations of potassium atoms at temperatures just above absolute zero, the team's observations could help identify the ideal conditions required to induce superconductivity. 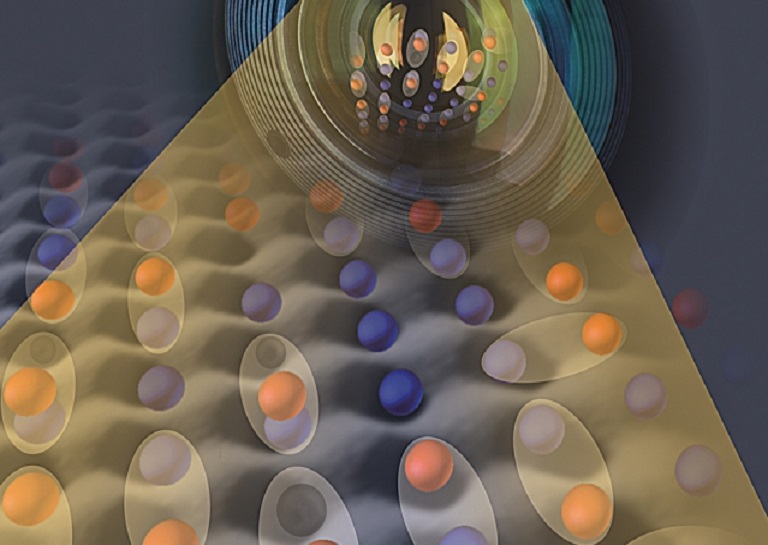 Superconductivity: the near-perfectly-efficient means of conducting electricity in a material via the elimination of energy losses. At present, this incredible property of certain materials is only possible below specific, extremely low temperatures. If superconductivity could be induced at room temperature, the impact upon possible efficiencies for electrical power would be extraordinary. But understanding how superconductivity occurs is hampered by our ability to visualize the phenomenon.

With this in mind, researchers at MIT have designed a 'quantum simulator', using atoms to model the behavior of electrons in a superconducting solid.

Team leader Professor Martin Zwierlein, MIT, reported to MIT News: 'Learning from this atomic model, we can understand what’s really going on in these superconductors, and what one should do to make higher-temperature superconductors, approaching hopefully room temperature.'

The team's atomic model is based on the Fermi-Hubbard model of interacting atoms, a theory commonly used to explain the fundamental principles of superconductivity. Previously, researchers have only been able to predict the behavior of weakly interacting superconducting electrons using this model. Professor Zwierlein explained:

'That’s a big reason why we don’t understand high-temperature superconductors, where the electrons are very strongly interacting. There’s no classical computer in the world that can calculate what will happen at very low temperatures to interacting [electrons]. Their spatial correlations have also never been observed in situ, because no one has a microscope to look at every single electron.'

By cooling the potassium atoms being studied to just a few nanokelvins and trapping them in a laser-generated lattice creating a two-dimensional plane, researchers were able to observe the positions and interactions of individual atoms. The behavior of the observed atoms varied depending upon the density of the gas at each position.

In the lower density regions - towards the lattice's edge - the atoms became 'antisocial'. This is consistent with the behavior of electrons theorized by famous 20th Century physicist Wolfgang Pauli, whose so-called 'Pauli holes' describe the tendency of electrons to maintain a certain sphere of personal space. 'They carve out a little space for themselves where it’s very unlikely to find a second guy inside that space,' said Zwierlein.

The really interesting behavior occurred in regions of higher density. The observed atoms not only allowed themselves to be bunched together, they also showed alternating magnetic orientations. Zwierlein explained: 'These are beautiful, antiferromagnetic correlations, with a checkerboard pattern — up, down, up, down.'

He went on to describe the unusual tendency of these atoms to 'hop on top of one another', resulting in a space alongside a bundled pair of atoms. The similarity between this behavior and that required for - still theoretical - high-temperature superconductivity is strong. In theory, superconductivity may be induced at room temperature via the frictionless movement of electron pairs between suitably large spaces in a lattice. Zwierlein described it as follows:

'For us, these effects occur at nanokelvin because we are working with dilute atomic gases. If you have a dense piece of matter, these same effects may well happen at room temperature.'

Read the team's findings in their Science journal paper.

Here's how to build a miniature refrigerator with basic materials