There has never been a more pure quest than trying to find the source of unlimited chocolate. A video has been going viral across the internet, and you may have seen it. It shows a man cutting up a chocolate bar, removing one piece, then reassembling it to get a full chocolate bar again. To prove his point further, he even puts it next to a whole chocolate bar to show that they are the same size. There is definitely something tricky going on, but do you know what it is?

With just a few cuts, this man creates endless chocolate, and wouldn't it be incredible if it were actually true. Believe it or not, there are quite a few people who believe that this man has unlocked unlimited chocolate, but let's break down what's actually happening here. The first deception thrown at you is the bowl full of chocolate pieces off to the left, making you believe he has been getting unlimited chocolate for a while now. Other than that, the video seems to be pretty normal, but there is actually some tricky geometry happening with the way he cuts the bar.

On his first go around, the bar looks to be about the same size, ignoring any slight deviations. Part of the deception occurs with the angle it is shot at, and how hard to notice the geometrical imperfections in the piece are to notice on the first iteration. The trick only works with the diagonal cut, and what is actually happening is that as the bar is realigned, it is actually losing a small amount of area due to the angles and sides not perfectly aligning. You can even do this trick at home, and it will appear to magically create endless chocolate, the first time. 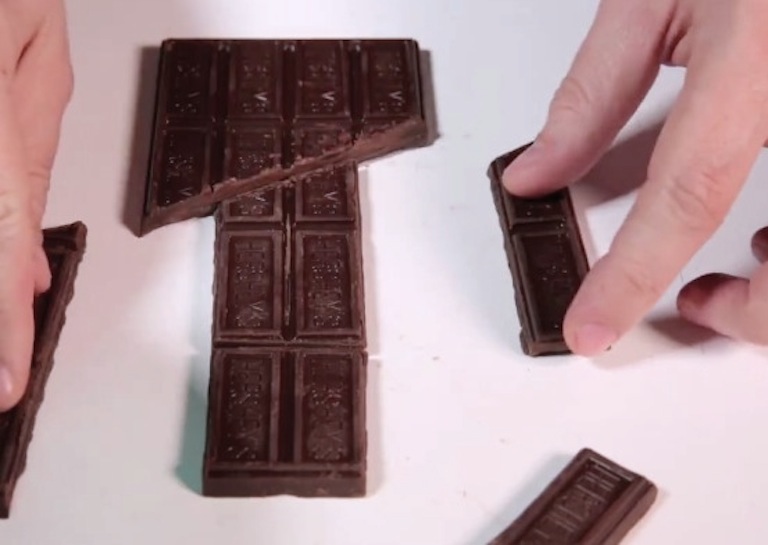 If you really wanted to debunk this, you could weigh out the chocolate bars, and notice that the resulting bar weighs exactly one piece less than a full-size bar. Geometry is very cool, and for those that don't understand all of its quirks, it can seem like magic.

Here's how delicious chocolate is made in a factory