Wind turbines are despised and beloved by many, but why are wind turbines white? As it turns out it's to help them blend in and increase their life span.

Wind turbines are one of those "love 'em or hate 'em" objects in life. Although some people do appreciate them as beautiful structures, from an industrial design point of view, many others don't. Whatever your opinion on them have you ever wondered why they paint wind turbines white?

In the following article, we'll look into some of the more common reasons as well as explore why they might be painted purple in the future, or not.

Why are wind turbines white? Believe it or not, to be more aesthetically pleasing than otherwise. Painting them white or light grey helps the entire structure "blend" into the background, especially when the sky is cloudy.

City planners, in general, seem to hold the consensus that the color white is less of an eye-sore than others. By making the entire structure white, the wind turbine is less visually obtrusive, in theory at least. White, after all, is a pretty neutral color.

Some efforts have been made to attempt to further camouflage them around the world. In Germany, Enercon turbines tend to be grey, for instance. Others have green stripes at their base to help them blend in with surrounding grassy regions.

They are also painted white for another, seemingly contradictory reason. Although from ground level the white color helps them blend in, from the air it helps them stand out. It's an interesting, almost, paradox that the same color can have two strikingly opposed reasons.

Painting wind turbines white is also required by most countries to make them more visible from the air. They also tend to make good use of warning lighting to make them stand out more at night. You may even see them with painted stripes on their blades for higher visibility during daylight in some parts of Europe.

Also, interestingly enough, the number of bands on the blade tips is not random. They can even let you know that you are least 5 km from an airport. This close to an airfield means that, according to German regulations, turbine blades must have a single orange stripe on each blade.

If there is no airport within 5 km the turbine blades must have two stripes. Annoyingly for turbine operators, this would likely mean that should a new airport be built in the future within a 5 km radius of the turbines, they would need to re-paint their wind turbines.

So in a way, you can think of them like a mono-colored WW2 fighter plane. From below they become harder to see but from above they stand out like a sore thumb. OK perhaps a bit of an awkward analogy but we just wanted an excuse to include a Spitfire photo.

UV famously degrades many materials over time. Given the exposed nature of wind turbines, not to mention the significant cost for installation, any strategy that can be employed to extend their lifespan is, of course, highly beneficial.

Generally speaking, colors, especially darker shades, tend to absorb sunlight and more importantly heat. White, on the other hand, tends to reflect sunlight and therefore heat. Heat causes things to expand, dry up lubrication and could cause blistering given enough time.

Painting wind turbines white also helps reduce expansion and cracking of the outer shells that houses and protects the turbines' "gubbins" and fiberglass composite rotor blades. Too much structural weakening will dramatically reduce the life of the blades.

Any other color would likely dramatically increase wear and tear on each unit and introduce unnecessarily higher maintenance and repair costs. The need to increase the life of each unit and reduce running costs over time is the main reason wind turbines tend to be white.

Should they be painted purple?

Excuse me? Yes, that's right why not paint them purple? Well setting aside our discussions above, painting them purple could be an option for making them "safer" for local ecologies. 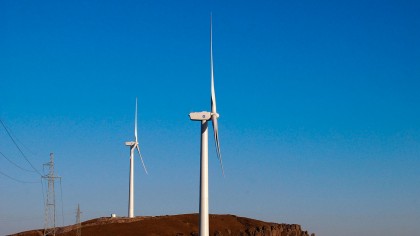 A study conducted in 2010 showed that wind turbine colors seem to be detrimental to local wildlife. Specifically, insects seem to be attracted to the color white a lot more than any other. In fact, they seem to have an aversion to the color purple.

The story goes that insects tend to "pool" around the turbines. This draws in their predators, who, by virtue of the hazard these turbines are by nature, tend to have higher than normal mortality rates. Bats and birds are occasionally, if rarely, killed by turbines, especially during summer months.

"It had been speculated that insects may be attracted to turbine structures for some reason and this then could attract insectivorous species, such as birds and bats, to forage in the vicinity,” said PhD student Chloe Long of Loughborough University, UK.

Interesting indeed. Their study measured how many insects are attracted to a range of paint colors. These included pure white, light and dark grey, sky blue, red and purple. The colored cards were laid out in a random sequence next to a 13m high three-blade wind turbine in Leicestershire, UK.

Amazingly enough, the study showed that the pure white and light grey squares were apparently irresistible to insects. Yellow was also very popular, but this would make sense given that a lot of plants use yellow to attract insects for pollination.

In the eye of the beholder

The research team was also quick to point out that there are likely many more other factors attracting the insects to the turbines. Color is probably just one of them but perhaps significant. The turbine' sound, air current movements around them and heat generation from the blades probably also play a role.

It could also be that the insects are simply curious little creatures who love to investigate seemingly enormous three "petalled flowers". Who knows, the jury is out. So don't fear we are unlikely to see purple wind turbines anytime soon.

So there you go. Why are wind turbines white? Primarily to increase their lifespan but also to help them both "blend in" at ground level and stand out from the air. Consider yourself enlightened :)