Why Did the Meteors at Chelyabinsk and the Tunguska Event Explode?

Why do meteors explode in the sky the way the Chelyabinsk Meteor and the Tunguska Event object did?

In December 2018, a meteor detonated in the sky over the Bering Sea near Russia with ten times the force of the atomic bomb that the United States dropped on Hiroshima at the end of World War Two. For Russia, this is notable, but it doesn’t even count as its largest explosion this decade. Russia can even claim two of the most well known meteor air burst events in modern times: the Chelyabinsk meteor explosion in 2013 and the Tunguska Event in 1908, possibly the most famous of all. But what causes these meteors to explode so violently in our atmosphere in the first place, and why do some make it all the way to the ground?

What Makes Meteors Explode in the Atmosphere?

When asking why objects like the Chelyabinsk Meteor or the meteor in the Tunguska Event explode, we should remember that when either a comet or asteroid hit the Earth’s atmosphere, its moving tens of thousands of miles an hour. In a vacuum, there’s nothing to create drag forces that slow it down, but as soon as it hits our atmosphere, it has a lot of air that it is suddenly displacing.

SEE ALSO: THE CLOVIS COMET AND THE FORGING OF HUMAN CIVILIZATION AS WE KNOW IT

Once the meteor is inside the Earth's atmosphere, all of that heat and pressure on one side of the meteor moving so quickly through the atmosphere creates a huge pressure differential between the highly compressed, blindingly hot windward side of the meteor and the backside directly opposite it, facing back out towards what is essentially a vacuum, as the displaced air hasn’t had time to fill in the space behind it.

This pressure differential will force whatever air is trapped beneath the windward side of the meteor to snake its way into whatever opening or crack in the surface of the meteor it can. This will start to push against the sides of these cracks as the intense pressure beneath the meteor continues, acting like a wedge splitter on a log of firewood. The pressurized air that has wedged itself into the structure will snake deeper forcing open more splits and cracks within the meteor, turning structural imperfections into serious structural flaws.

Eventually there comes a point where the pressure differential between the windward side of the meteor and the side opposite it is simply too great for the structure of the meteor trying to contain the pressurized air.

Once the first “hole” punches through to the underpressurized backside, the meteor will rupture so violently that whatever remaining structural integrity it has left will be unable to restrain the superheated, ultra-pressurized air that has burrowed into countless cracks and fissures throughout the meteor. The pressure inside the meteor pushing outward in all directions simply blows the whole meteor apart in an explosion that releases the majority of the heat and kinetic energy generated during this process in an instant.

How Much Energy was Generated by the Chelyabinsk’s Meteor and the Tunguska Event’s Meteor?

When the Chelyabinsk Meteor finally exploded, the energy generated by its decent was released in a shock wave that shattered windows miles away and injured hundreds of people, though luckily no one was killed. At about 60 feet in diameter, about 22 million lbs, and traveling about 40,000 mph when it detonated, it released as much energy as 20 to 40 Hiroshima bombs about 12 to 15 miles above the Earth.

This pales in comparison to the Tunguska Event, where the same thing is believed to have happened.

"...High above the forest the whole northern part of the sky appeared covered with fire..."—Eyewitness to the Tunguska Event from 40 miles away

Detected on some barometers as far away as London, the explosion produced dense, high altitude clouds over the Tunguska region of Siberia that was able to reflect sunlight from beyond the horizon. Exploding over an isolated stretch of forest, the explosion blew an 800 square mile region of forest flat onto its side, the scorched trees all pointing away from the epicenter.

An eyewitness sitting in front of a shop 40 miles away was blown out of his chair by a blast of air so hot he thought he'd caught fire. Before that, he had been looking at the explosion as it happened, an event that locals took to be the wrath of the god Ogdy, and this man may have been the only eyewitness to the Tunguska event itself.

"Suddenly in the north sky… the sky was split in two," he told investigators, "and high above the forest the whole northern part of the sky appeared covered with fire… At that moment there was a bang in the sky and a mighty crash… The crash was followed by a noise like stones falling from the sky, or of guns firing. The earth trembled."

Okay, Does A Meteor Explode if its Really Big?

Sometimes. Size is a factor as to whether a meteor will explode or not, of course. Some meteors that originated as asteroids will be large enough and structurally sound enough that this pressurized explosion process does not have enough time to work its way through the meteor sufficiently to break it apart, but since the largest asteroids we know of are only around 4 to 6 miles in diameter, this is somewhat of a roll of the dice. A lot would depend on the inner structural integrity of the specific object. If they do make it through, when they hit the ground, they hit with an energy equal to billions of Hiroshima bombs, as was the case with the Chicxulub meteor, between 6.5 and 50.25 miles in diameter, that had an impact blast equal to about 100 million megatons, or 7.1 billion Hiroshima bombs. 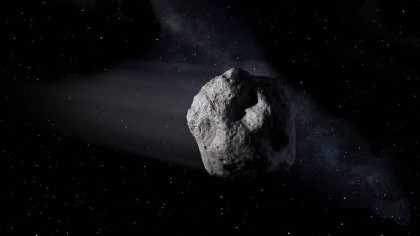 The Chicxulub meteor, however, might also have been a comet, which would have put it in the 15 to 50 mile wide range of these estimates, and then it definitely wouldn't have exploded in the atmosphere. Comets, meanwhile, can be much larger than asteroids, travel much faster, and given the nature of their orbits, they are much more likely to hit the Earth with a dead-on impact than an asteroid will, which also has a circular orbit around the Sun, so it is much more likely to hit with a glancing, lower speed blow.

A solid comet can be as large as 35 to 50 miles in diameter, traveling up to three times faster than an asteroid. A comet impact will likely generate exponentially greater force than an asteroid impact, so whatever effect the atmosphere had on the comet, the atmosphere wouldn't have had much time to do much of anything before the comet will already have hit the ground.

This has happened a lot in our past, and we should be glad since it gave us oceans and organic materials from which life could grow. However, they are much rarer than asteroids, so the likelihood of a comet hitting us is very remote, and the odds that an impacting comet also detonating in the atmosphere is even less likely.

The bigger worry is actually when a comet passes us by "safely". As the heat of the sun melts the ice of a comet, chunks of it are likely to break off in a trail of debris around the Sun. The Earth passes through these trails often enough that the meteor showers the comet's debris produces as bits and pieces burn up in our atmosphere are even given names, such as the Perseids meteor shower. They are beautiful sights to see, but only becausethey are small enough to that they burn up harmlessly.

Larger pieces have been known to break off and hit the Earth as well, and the results of these impacts can be devastating. Some of these pieces have even exploded in the atmosphere, just like the Chelyabinsk Meteor and the Tunguska Events. With something like the several-mile-wide Clovis comet fragments that hit the Earth around 11,000 BCE, at least some of which are believed to have exploded in the atmosphere, the destructive power of those detonations were so catastrophic that the impact event psychologically scarred humanity for millenia and would change almost everything about how human beings would live their day to day lives, even to this day.

Why Do Bees Just Keep Staring at Flowers After Feeding on Them?

The Reason Why Lightning Doesn't Take the Shortest Path