Jupiter, the king of the planets and fifth from the sun, may have been on its way to becoming a co-called 'Hot Jupiter'. What stopped it?

Until the discovery of the first Hot Jupiter, astronomers who studied the solar system thought they had a pretty good understanding of how we all got here.

Over the course of a billion years, the slow globbing together of motes of dust formed the rocky planets within the inner solar system. Beyond the asteroid belt, the big and powerful gas giants evolved from icy, earth-sized asteroid-like bodies into massive planets with atmospheres of gas tens of thousands of miles thick by collected the abundant gases flowing around the early solar system that would be densest further away from the Sun.

Having never seen another planetary system to compare it to, the nice orderly growth and eventual segregation of the different classes of planets into neat, almost divinely-mandated zones had a certain appeal to it.

It fit in well with our implicit divisions into heirarchies and vassal-patron relationships arising from the vast disparity in power that makes up most of human history.  That began to change in the mid-1990s after the discovery of exoplanets orbiting around other suns that directly challenged our assumptions and immediately called into question nearly everything we thought we knew about how the planets formed.

The Abundance of Hot Jupiters and Super Earths Gaslights Astronomers

The discovery of Peg 51, the first exoplanet ever discovered that orbits a star similar to ours, wasn't like anything we'd ever seen. It has half the mass and roughly the same diameter as Jupiter, but it was only taking 4 days to orbit its star, an orbital period that seemed impossible for something so massive.

The only way this made sense was if Peg 51 was less than 10 million miles from the surface of its star. Not only did subsequent observations bear this out, other astronomers studying other star systems were finding these so called Hot Jupiters all over the place. Many of these star systems even had several bodies in very close orbit around their stars, many of them several earth masses or larger.

What they were not seeing in these solar systems was one that looked anything like ours. The neat, orderly divisions of our home system, with the small, rocky worlds on the inside and the large gas giants on the outside—with nearly all of the planets orbiting the sun in a well-formed ellipse with very little eccentricity—was actually a galactic freak of nature.

In the years that followed, scientists have begun to look again at the conditions that produced the solar system we live in and the story that is beginning to emerge turns the old, boring origin story of slow, steady, and stable growth on its head.

The essential mystery of Hot Jupiters that astronomers were confronted with while observing other systems was trying to imagine what process could have caused something so large to settle into an ultrafast orbit only a tenth of the distance from its star as we are to our sun.

There are three major theories that scientists have come up with, but we only need to worry about one of them, the Migration Theory.

Much like a black hole is surrounded by an accretion disk, the earliest stage of star formation also produces a similar disk of dust, gases, and debris around the star. Because of the way the stars gravity interacts with the gases of its accretion disk, the gases of the disk are slowly being sucked into the star, creating a kind of stellar whirlpool with the stellar furnace at its heart.

Since it is the outer regions of the accretion disk that are usually the most gas-dense, this whirlpool effect on the gases much farther out are even more powerful and could even reduce the radial velocity of a gas giant’s orbit effectively sweeping up the gas giant with its current and carrying it further into the star system in an increasingly tightening spiral towards the star.

In Ancient Greek and Roman mythologies, Jupiter—or Zeus, in his Greek manifestation—was an ill tempered, violent, and uncaring king of the classical pantheon. Whatever catastrophe Jupiter brings about in the Universe, and there were many, it was never Jupiter who suffered the consequences but the often innocent bystanders who were in the wrong place at the wrong time.

As it turns out, Jupiter the planet may not have been any better behaved in its youth then the mythological figure it was named for. Just as astronomers have sought to explain how a gas giant becomes a Hot Jupiter, others been trying to learn why our Jupiter didn’t become one and, so far, the evidence is starting to reveal an early solar system that was the stage for a remarkable series of events.

The most recent research tells us that Jupiter began its life as an icy asteroid about the size of Earth. This data shows that this icy body, which would go on to form the core of the gas giant we see today, started out about four times as distant from the Sun as Jupiter is today, placing its birthplace in between the current orbits of Uranus and Neptune.

It is believed that about 2-3 million years after it first formed in the Sun’s accretion disc, Jupiter began a 700 million-year-long period performing what some scientists call the Grand Tack, inspired by the kind of “tack” maneuver a boat performs when it moves in towards a buoy, slips past and around it, and then speeds away back in the direction it came from. In Jupiter’s case, this Grand Tack maneuver by the growing gas giant would profoundly affect the evolution of the solar system.

In other exoplanetary systems we’ve studied, one of the predominant features is predominance of systems with one to several Super Earth-sized planets in close orbit around a star; something our solar system lacks. 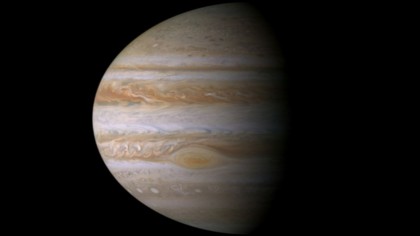 In its tightening orbital migration, Jupiter’s gravitational influence would have driven innumerable asteroids and other proto-planetary material cascading into the inner solar system. Jupiters gravity would also have distorted the orbits of the evolving Super Earth-sized worlds into more elliptical, and possibly overlapping, ones while raining asteroid hell down on them from the outside.

As violent as these collisions might have been, the most important effect of this cascade of asteroids and planetoids colliding with each other is what it did to the gases in the inner solar system. The unexpected avalanche of rocky material drove aerodynamic forces that captured the growing planetary bodies of the inner solar system in their currents and eventually swept these planets down into the sun itself.

Simulations show that this Grand Tack of Jupiter’s would have completely destroyed any of the evolving large bodies caught out in front of its inward pilgrimage towards the Sun.

A Timely and Moderating Intervention

This should have been the case, but clearly this didn’t happen. Jupiter, rather than continuing its migration to within a few million miles of the Sun as a Hot Jupiter would have done, instead changed course: it tacked.

As Jupiter got to within 1.5 AU of the sun, about where Mars is now, it’s forward migration halted and it began to retreat away from the Sun. As it turned out, Jupiter wasn’t the only gas giant on the move. Neptune and Uranus were beginning their own version of this process, as was the most important one of all—Saturn.

Building up over hundreds of millions of years behind behind Jupiter, Saturn had grown large enough that its gravity began to exert a strong enough pull on Jupiter that Jupiter's orbit, rather than tightening, began to move it away from the Sun.

Before long, Jupiter and Saturns orbits became locked into resonance, allowing both gas giants to clear away any remaining gases between them. Without these gases to drive their migrations, Jupiter and Saturn settled into their current, stable orbits.

What Jupiter left behind in the inner solar system, in cosmic terms was next to nothing, but its believed that as Jupiter tacked back to its current orbit, it pulled what flotsam and jetsam remained into stable, circular orbits. Over the next few hundreds of millions of years, the debris left over after Jupiter’s destructive charge towards the Sun would coalesce into the planets of the inner solar system we know today.

Jupiter will occasionally lob an icy asteroid or two at the inner planets—which, when the earth was young, began to accumulate and would eventually form oceans of liquid water—but for the most part, Jupiter’s role as the destroyer of worlds is over, reined in by the moderating gravitational influence of Saturn.

Now, rather than our destroyer, Jupiter has become our protector. Containing 2.5 times the mass of all other planets combined, Jupiter acts as a gravitational shield in orbit around the inner solar system, redirecting most to nearly all the incoming asteroids and debris away from the inner solar system (there are important exceptions, of course).

This respite gave Earth the time it needed to evolve lifeforms of increasing complexity, protected from having its work set back or destroyed in repeated and catastrophic asteroid impacts. In return, Jupiter and Saturn have a community of humans here on Earth who recognize these planets' role with gratitude, something that as far as we know no other gas giant in the universe can claim.