Why Do Some Planes Leave Trails in the Sky?

As some aircraft fly through the sky, they leave trails of what appears to be smoke. Though do not be concerned, the trails are mostly condensation- hence the name "condensation trails". As the engine burns, it ejects a large amount of water and some aerosols into the air. Contrails are created when water vapor condenses and freezes around small particles generated from the engine exhaust. Both the particles and water lead to the generation of contrails.

Though some elements in the gas do not contribute to contrail formation, they are still considered pollutants. Typically, an aircraft's emissions include carbon dioxide, water vapor, nitrogen oxides (NOx), carbon monoxide, hydrocarbons such as methane, sulfates (SOx), and soot and metal particles.

Planes like the Boeing 747 eject huge amounts of water, about 2.75 kg of water per second.

The types of contrails

Contrails are extremely similar in composition, though differ greatly in their life span. The weather directly influences how long a contrail exists for. Contrails are generally classified in three distinctions: short-lived, persistent (non-spreading), and persistent spreading.

Short-lived contrails resemble short white lines which tail the plane. As their name suggests, the trails only last a few minutes before they disappear nearly as fast as they are made. The air which the plane travels through is somewhat moist with only a small amount of water vapor available. Any ice particles created quickly return back to a vapor state. 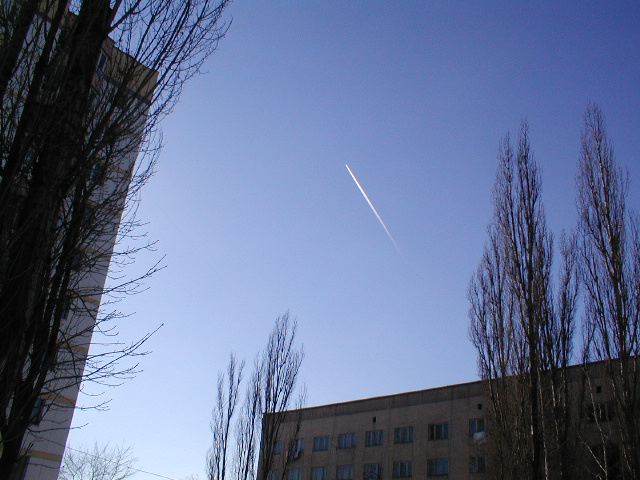 Persistent (non-spreading) contrails are much longer white lines which remain visible for a long time even after the plane disappears. The air which the plane travels through is rather humid with a large amount of water vapor available to create a trail. 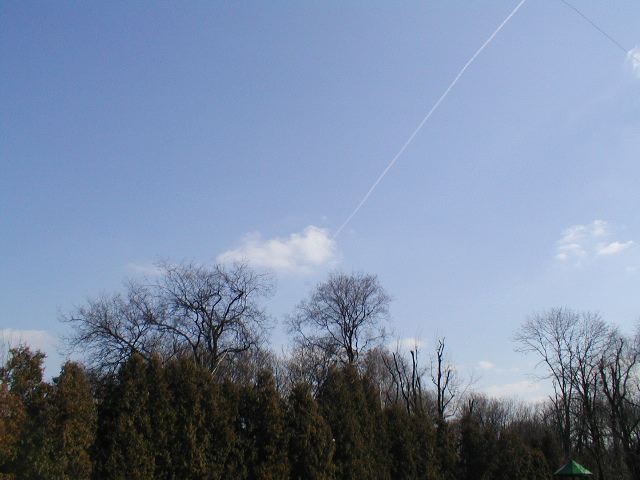 Persistent spreading contrails are similar to non-spreading trails. Though, they spread out over a larger distance because of turbulence or other weather conditions. Their large area and life longevity make them the most likely to affect climate. 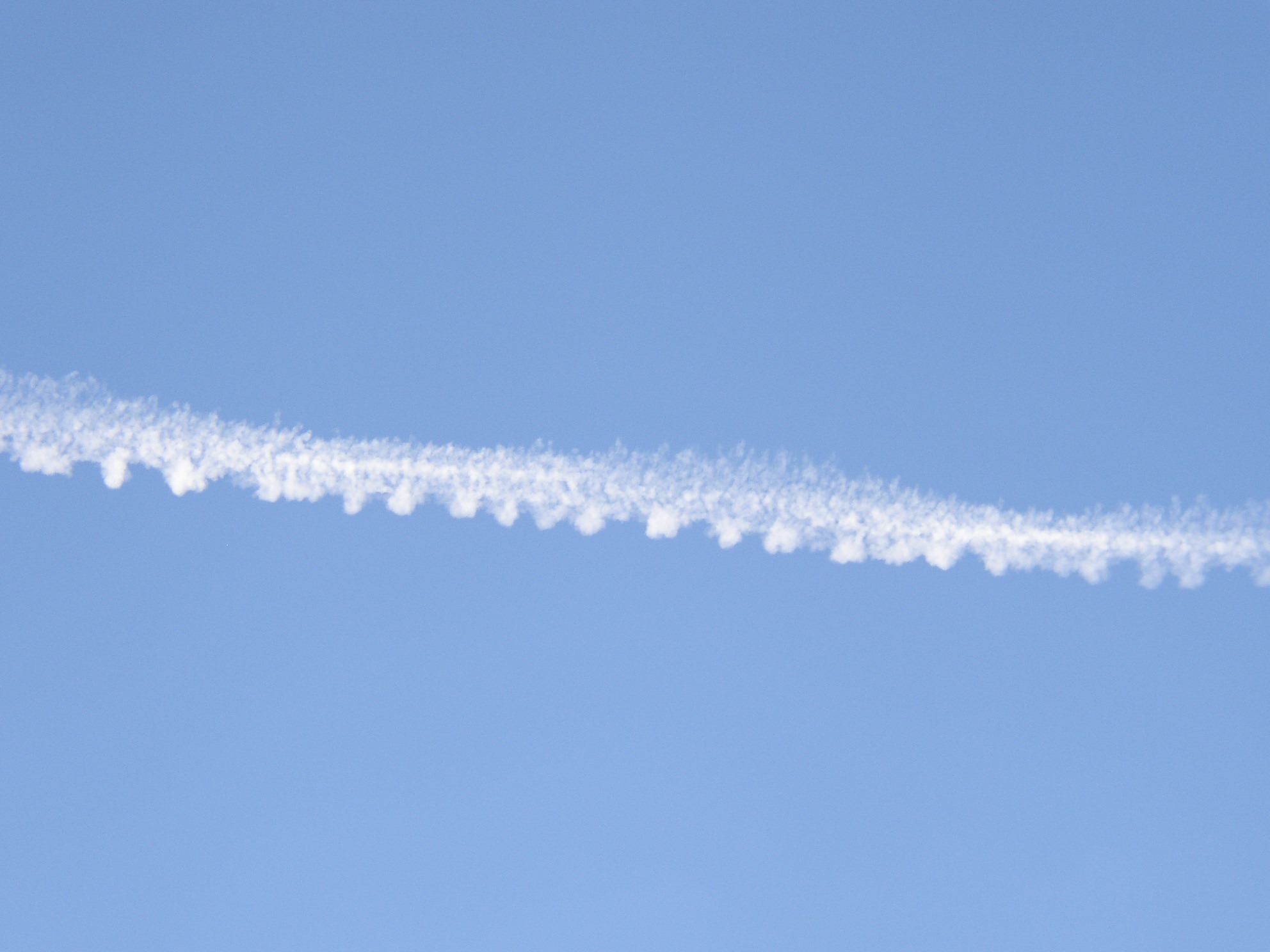 Contrail cousins resemble contrails though differ slightly in the physical process which creates them. One of the most common type of contrial cousins are the vapor trails which extend from the wingtips of a jet, typically during takeoff or landing. Weather permitting, if the pressure of the vortex at the end of the wingtip drops enough, a trail will form. Under the right conditions, liquid water forms drops inside the vortex making them visible. Though, they quickly evaporate after they are created.

Typical contrials seen behind airliners are not dangerous. Their main composition is pure water. Jet fuel is also highly refined to remove as many contaminants as possible. Inside the engine, a large amount of gas must quickly flow through to the combustion chamber to keep the turbine spinning. The fuel travels through small tubes within the engine at liters per second. The smallest imperfections can lead to a build up which can prove to be deadly.

An engine overhaul is extremely expensive, reaching into the millions of dollars. Airliners take every precaution that the fuel which is used within the aircraft is nothing but the highest quality. At each refuel, the time, location, and amount of fuel are recorded to link back to the source in the event of an unlikely accident.

Chemtrails became a popular figure in the public eye after a 52-page report was presented before the Airforce. The paper examined the possibility of modifying weather patterns and using it as a force multiplier. The operational capabilities split into two directives, degradation of enemy forces, and enhancing friendly ones. The weather could be modified to degrade enemies or enhance friendly forces. The plan including enhancing storms and floods to damage communication lines as well as cause mass droughts. Friendly forces were to be concealed behind fog while improving upper atmosphere weather to receive greater satellite connection.

In short, not really. Though some countries have taken initiatives to take weather into their own hands. Though controlling the entire weather system still remains entirely elusive, scientists have been able to modify one aspect: precipitation. In the 1940's, Irving Langmuir and his assistant, Vincent Joseph Schaefer generated man-made rainfall for the first time in human history.

While researching wing icing on November 13, 1946, Schaefer poured out a bag of dry ice weighing a few kilograms from an airplane into a supercooled cloud. He then flew his plane under the cloud and was shocked when he saw snow falling from the sky. By the time the snow reached Langmuir on the ground, it had transformed into rain.

The phenomena was dubbed cloud seeding. It is the process of artificially altering the weather to cause a precipitate. As the dry ice falls through the cloud, water vapor which trails it condenses into rain. The rain continues to grow until the cloud from which they are suspended cannot contain them, causing them to fall.

Other strategies involve spraying particles into the air to capture the moisture and cause it to accumulate. Dust, smoke, or sea salt particles are injected into the area to influence precipitation. Silver iodide can also be used to influence vapor to fall out of gaseous form.

Both strategies are still used to this day to influence some weather patterns. Though, the process is only executed in areas of extreme drought and pollution.

Most "chemtrails" in the sky are contrails. The majority of the trail is simply water vapor and poses no harm. Though, some contrails absorb a lot of thermal energy from the sun, potentially contributing to global warming.

However, airliners are engineered to be as fuel efficient than ever. Now, some aircraft are even more efficient than new car models. Though there exist some areas which require cloud seeding, most of the world remains unaffected by the contents which are ejected from the engines. In hindsight, airliners do not spread chemicals into the air. Weather modification aircraft are a division of their own to modify very specific areas around the earth. Despite the very few aircraft which are used to help farm crops, the majority of aircraft have virtually no influence on the weather leaving you to rest assured it is not just airplanes who are polluting the skies.

SEE ALSO: The Reason Why Most Non-Military Planes Are White