Probably most of you are familiar with the term horsepower. Adverts for products such as cars, lawnmowers, chainsaws often promote engines by quoting them in horsepower. But what do engines have to do with horses? Why do we still use horsepower?

In this article, we'll try to address what exactly horsepower is, where the term comes from and how it applies to everyday life. 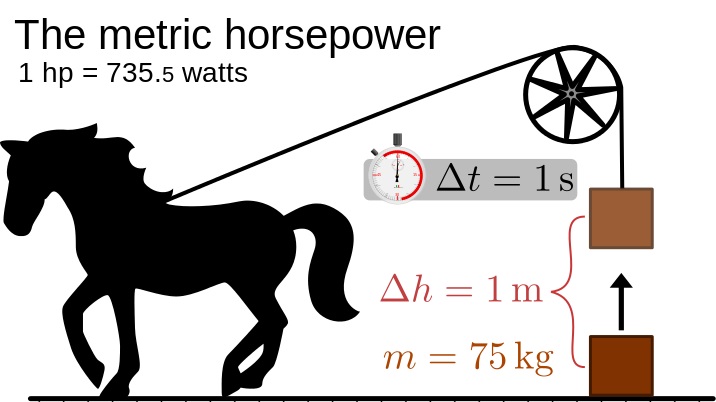 The power of the horse

Legend has it that engineer James Watt invented the term "horsepower". Watt lived and worked between 1736 and 1819. He was famous for his work on improving the performance of steam engines. His name has also become identified with the SI unit, the Watt.

As the story goes, Watt was working, probably turning a wheel, with ponies at a mine; history is nothing if not vague. The ponies were lifting coal conveniently while Watt observed and noted that on average, each horse could perform around 22,000 foot-pounds of work a minute. So, by Watts estimation, a good draft horse could lift 22,000 pounds of material 1 foot in 1 minute which is equal to 2,200 pounds of material 10 feet in one minute. 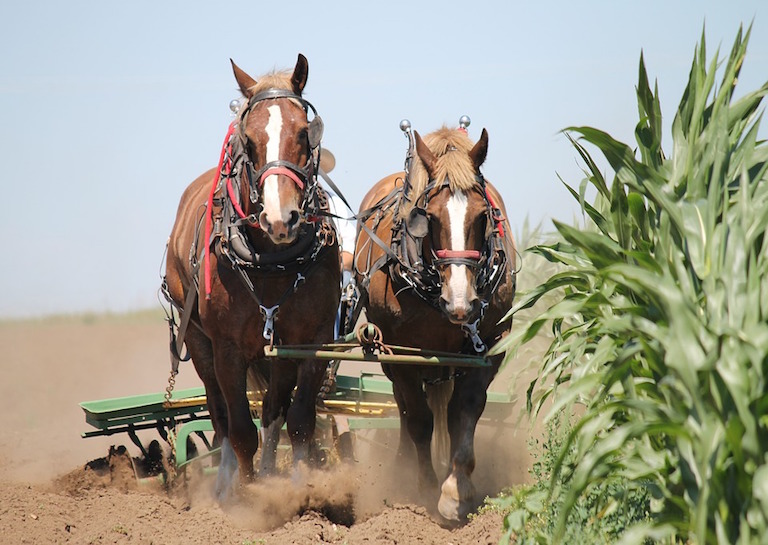 Watt met Joseph Black in the late 1750's. Black was then a Professor of Chemistry at Glasgow University. The two men quickly became friends and Watt provided model engines for Black to use in his lectures on the topic of heat.

One Sunday in 1765, Watt was struck on an idea that arguably sparked the Industrial Revolution. Watt, on a leisurely stroll through a park near the Clyde, realized that he could make the standard Newcomen steam engine more efficient. His solution was relatively simple; incorporating a chamber for condense steam without cooling the rest of the engine.

Watt had made some significant improvements to the Newcomen steam engine and was attempting to sell his new version. His new engine used about 75 percent less fuel than a similarly powered Newcomen, among many other improvements.

In 1769, Watt patented his steam engine condensing chamber. Later in 1774, he started a business in Birmingham with investor Matthew Boulton to manufacture his improved steam engine. The Boulton and Watt Company began producing steam engines that are usable practically anywhere. High demand for them soon followed. Both men became leading figures during the coming Industrial Revolution.

Watt continued to make improvements to steam engines and patented other important inventions, such as the rotary engine and a steam locomotive. Watt's achievements soon became recognized by fellow scientists. He became a Fellow of the Royal Society of Edinburgh and the Royal Society of London. He also became a Foreign Associate of the French Academy of Sciences.

Watt needed to market his new engine. This was easy enough to accomplish with people who already owned a Newcomen engine whereby could compare the outputs easily. But what about potential clients who still used animal labor? Watt concluded that he needed a way to advertise the "power" of his new engine to those who still used draft horses to move weight and to power machines. "Eureka!", how about "horsepower"?

Watt decided to add an arbitrary 50 percent to his figure to get 33,000 foot-pounds per minute of work. From this "highly scientific" determination, horsepower that we still use today was born. This new unit worked out at moving roughly 330 pounds of coal 100 feet in a minute, or 33 pounds of coal 1000 feet at the same amount of time. From this estimate, Watt made further apples-to-oranges conversions to calculate the horsepower of a steam engine to X hp.

Clearly, that is a very generous estimate, very few horses could maintain that kind of power over a full workday. Not that this bothered Watt since an exact figure wasn't his objective. By overestimating a draft horse's "power", Watt was able to ensure that his product would always over-perform which is a great selling strategy.

The name of the beast

As you can see, using any combination of the weight of coal, height or distance in a minute can be worked with as long as the product is 33,000 foot-pounds or 1 horsepower. Obviously, you would face problems if you wanted to move 33,000 pounds of coal by one foot or one pound of coal by 33,000 feet in one minute. These are clearly highly unlikely to occur. It would be nice to have a super strong horse or a super fast horse that could travel at around 600 kph (375 mph).

Incorporation of a block and tackle system can overcome this problem. The block and tackle efficiently trade perceived weight for distance by using an arrangement of pulleys which makes it possible to create a system that puts a comfortable weight on a horse at a comfortable speed no matter what the bucket weight.

Anyway we digress, we don't know for sure how he came up with his arbitrary figures as there are conflicting accounts. Ultimately, Watt's engine was revolutionary and played a huge role during the Industrial Revolution. For this reason, his unit of measure for engine power became very popular. Funnily enough, perhaps ironically, the Watt (named in homage to James Watt), is widely used to replace horsepower in most applications.

Like all units, horsepower is convertible into other units

1. One horsepower equates to 746 watts. So, all things being equal, one horsepower, um horse, on a treadmill could operate a generator and create 746 watts.
2. One horsepower, over an hour, equates to 2,545 British Thermal Units. BTU is the energy needed to raise one pound of water by one degree Fahrenheit. One BTU is 0.0003 kwhs.
3. One BTU equals to 1,055 joules (252 gram-calories or 0.252 food calories). If we had a 100 percent efficient horse producing one horsepower, it would burn about 641 calories in one hour.

However, Watt wasn't the first to attempt to equate steam power to horses. Though he was the first to give such an equation a value.

"So that an engine which will raise as much water as two horses, working together at one time in such a work, can do, and for which there must be constantly kept ten or twelve horses for doing the same. Then I say, such an engine may be made large enough to do the work required in employing eight, ten, fifteen, or twenty horses to be constantly maintained and kept for doing such a work…"