Penguins are often sought as the adorable tuxedo-wearing emperors of the Antarctic. Although there are 17 different species, perhaps the most celebrated are no other than the Emperor penguin. The flightless birds are renowned for their remarkable ability to survive temperatures well below -40 degrees Celsius. They constantly stand on ice all day, which begs the question, why don't penguins' feet freeze?

In the Antarctic, it gets rather chilly. To survive the sub-zero temperatures, penguins have adapted a unique technique to keep their feet from freezing.

The Ingenious Solution in Keeping Penguins' Feet from Freezing

Emperor penguins spend their entire lives battling against the frigid temperatures in the Antarctic. Just like any other warm-blooded animal, they make their own heat by metabolizing foods.

However, in the Antarctic, penguins must use other innovative strategies to keep their extremities from freezing. An insulating layer of plumage (a thick coating of feathers) on the outside, and underneath, another layer of blubber protect a penguin's body from the cold.

Although, the fat and feathers are nonexistent on a penguins' feet. To keep them warm, they make use of a unique evolutionary technique.

The magic behind keeping a penguin's body warm relies on their remarkable ability to keep their feet just above freezing temperatures. Their muscles are nestled into their bodies protecting them from the cold. Long and strong tendons extend down to their feet to control movement. Their tendons are thick and are not as easily affected by the cold.

However, pumping warm blood through their feet would cause the heat to radiate away into the ground. To prevent this, penguins make use of a system known as the counter-current heat exchange. Before the warm blood reaches their feet, the blood vessels traveling to the feet wrap around the vessels coming back up. Using this method, the blood that flows towards their feet dumps the heat into the blood flowing back into their bodies. 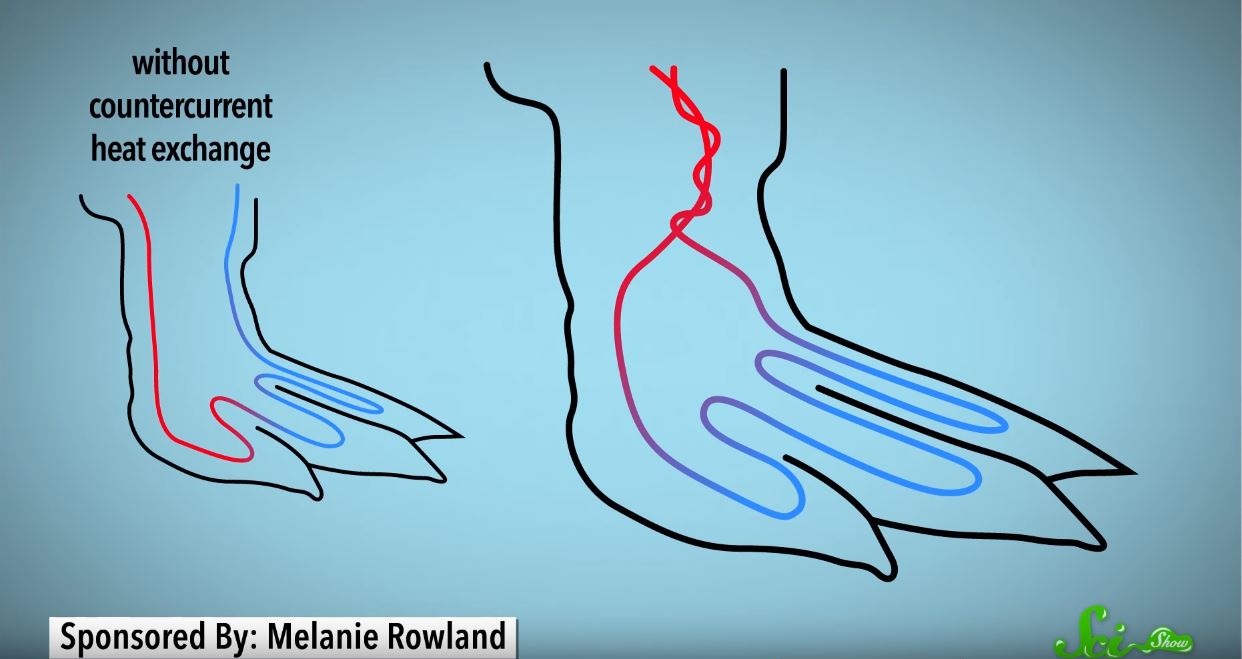 Penguins' feet counter-current heat exchange systems: Vessels wrap around each other to exchange heat before it is lost to the ground. [Image Source: SciShow via YouTube]

Below, Hank Green, a host of SciShow explains the remarkable process.

The incredible counter-current heat exchange system penguins make use of is not the only remarkable process penguins use to keep the cold at bay.

According to a study published in 2013, penguins have another trick up their sleeves.

The study reports Emperor penguins maintain a body surface temperature below the air temperature surrounding them. Though it seems counterintuitive, this extra process allows them to best the harsh Antarctic climate.

By keeping their plumage layer cooler than the external air temperatures, the scientists investigating the penguins discovered a unique effect that allows the birds to gain heat.

Gaining heat by getting cool

While penguins lose some of their heat through their insulating plumage layer, keeping their feathers cooler enables them to gain a slight amount of energy back through thermal convection.

Thermal convection is the process of transferring heat through the motion of fluids. The process works by absorbing some of the heat from periodically warmer gusts of air while preventing the air from absorbing heat from their bodies.

"As the cold Antarctic air cycles around their bodies, slightly warmer air comes into contact with the plumage and donates minute amounts of heat back to the penguins, then cycles away at a slightly colder temperature."

Thermal imaging of a flock of penguins revealed the incredible findings. 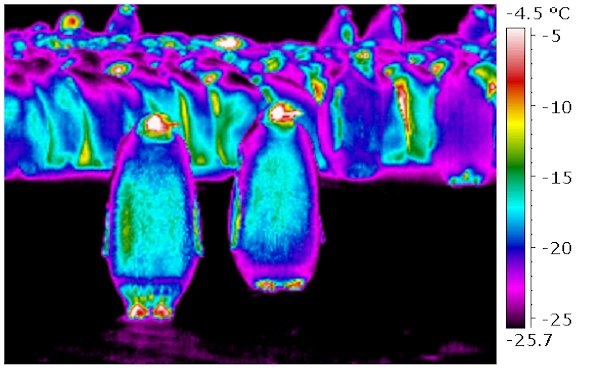 After examining the results, researchers discovered that the penguins' plumage remains a few degrees colder than the air temperature.

At the time of measurement, the temperature outside was about -17 degrees Celsius. The penguins' plumage on their heads, chest, and backs, however, were -19, -22, and -23 degrees Celsius respectively.

Computer simulations confirmed some of the heat was gained back through thermal convection currents.

Although the results were minimal, in the Antarctic where penguins live in temperatures below -40, every degree counts.

Emperor penguins are truly a remarkable species. Their unique adaptations have enabled generations of penguins to best the cold in even the worst of conditions. The species live a demanding life; they walk over 100 km to their feeding grounds and have to survive the world's most harsh weather conditions. However, their incredible feet and unique plumage have yet to be thwarted by Mother Nature.