Why Engineers Need to be Good Storytellers

It is important to tell stories that show how your projects make sense. You have to be able to visualize why it is important, or else it will all be data, and data does not connect like stories do.

I was recently at the RISE Conference in Hong Kong -- a gathering of 14,000 tech enthusiasts, 600 startups, and 250 speakers. The amount of information disseminated on the four main stages was nothing short of epic. 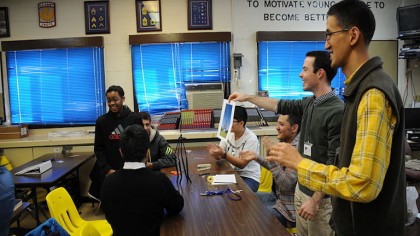 The World Needs More Engineers that Can Communicate

I attended a panel on diversity in tech, and one of the panelists caught my attention. When he answered questions, he utilized stories rather than data. His stories helped me visualize what he was sharing, and as a result I felt more connected to his message. So, naturally, I found his profile on Twitter and asked if I could interview him. A few tweets and a day later, we connected. His name is Gopichand Katragadda, but he wanted me to call him Gopi.

Dr. Gopichand Katragadda is the group chief technology officer at Tata Sons, where he drives technology and innovation for the Tata group leveraging cross-company synergies. He also serves as a director on the boards of select Tata companies.

Previously, as the chairman and managing director of GE India Technology Centre, he facilitated funding of cross-business innovation, championed the commissioning of new research labs, developed research teams, and helped build GE’s largest R&D Centre – the John F Welch Technology Centre (JFWTC). Under his leadership, the JFWTC team contributed to over 300 US patents a year. Dr. Katragadda also served as the chairman for GE-BEL.

Join me, as I discuss storytelling with this world-famous engineer who is…

Ryan Foland: When I read your Twitter bio, the thing that struck me was that you described yourself as a storyteller. How did you become a storyteller? Were you a campfire storyteller? Was it in your family?

Gopichand Katragadda: It's in the family. There's a city in India called Hyderabad, and in Hyderabad there’s a road called Tank Bund. Tank Bund connects Hyderabad to the twin city of Secunderabad. There are a limited number of statues on the Tank Bund recognizing pioneers from the region; one of them happens to be my great-grandfather, Tripuraneni Ramaswamy. He was a lawyer, by profession, as well as a poet and a community worker. He studied law in the United Kingdom a long time ago, but he ended up being a storyteller using the medium of poetry and wrote to challenge the Indian society to unite, rather than live divided by castes. Ramaswamy’s son, my grandfather Tripuraneni Gopichand, was a novelist. I am named after him. Gopichand won what is known as the Central Sahitya Akademi Award in India, which is one of the greatest accomplishments a writer can hope to have.

Ryan Foland: Storytelling is a part of your DNA.

Ryan Foland: Does this mix play a part into your passion for diversity?

Gopichand Katragadda: When I went to Iowa State, I was President of the India Students’ Association. At that point, there was a difference of opinion between student bodies from India and Pakistan over the issue of Kashmir. In an interview, my statement to the media was, "We've come here to study, let's keep politics out of it, and focus on education." The journalist Amie Willis asked, "Why so? I'm a Political Science student, and I would like to know more details about the politics and what's happening in your region." That sort of opened up my thinking, because I was always in the Engineering College and diversity of thought was limited. Also, the fact that she was able to put it so simply, "Why not?" I think that is the difference in thinking. Since then, I realized that there are clearly different perspectives, but perspectives actually come from different vantage points.

I give that example because that's one story in my life. It may be a 5-minute portion of my life, but that story has remained. For me, that's the way I think about diversity. I completely changed my thinking after that. Understanding that political science is a subject; politics is not wrong. It's how we think about politics that is wrong. That story has been the seed which has shaped my thinking on diversity. Amie Willis is still in my memory.

Ryan Foland: That is powerful, such a small interaction that had such a big impact on your life. And even listening to it now, as you retell it as a story, I can visualize the whole interaction.

Gopichand Katragadda: Yes, life is made up of a sequence of stories. All the more reason why I think it's so important for people to have storytelling talents.

Ryan Foland: How do you incorporate the concept of storytelling into your communications around engineering?

Gopichand Katragadda: Here’s an example: One of our innovations is an aerial pesticide spray using quadcopter drones. I can say, "We're working on pesticide-spraying drones; we have a partner on the pesticide-spraying mechanisms; we do the research; we have published patents, and we are effective because we can do it ten times faster. We can do it with ten times lower amount of pesticide, and so and so." That's a very factual way, and does not connect with people as much as stories.

The better way, I think, of sharing the same story, is, "Not so long ago, I was in the rural parts of the southern state Karnataka in India. There, the farmers grow lentils. Part of the agricultural process involves spraying pesticide on a periodic basis. The spraying is performed by a worker, manually, with a hydraulic sprayer. However, manual spraying takes time, the spray is often blown back on the worker, and despite the effort to provide protective equipment and train the workers, compliance is an issue and workers engage in unsafe practices. In some cases, a tractor is employed to go over the crop spraying. When they go over the crop with a tractor, they are actually crushing the crop underneath. What we are able to do is fly one meter above, spray the right amount, and do the same job."

Visually, you connect better with that type of a story. It is important to tell stories that show how your projects make sense. You have to be able to visualize why it is important, or else it will all be data, and data does not connect like stories do. If you don't feel emotionally connected, you can't share the passion.

Ryan Foland: Would you agree that Engineers are more introverted?

Gopichand Katragadda: I think that is a fair generalization.

Gopichand Katragadda: One of the simplest and most effective storytelling techniques is to go live in the shoes of the customer. When you do this, you will find real world stories where your technology will make a difference. It allows you to discover what people are doing now. Sometimes the existing process is very difficult. If you experience what your customers do and really understand their pain points, you can live in their story. Then you can craft your own story of how your technology or solution would make things different. This first-hand experience will help you tell the story of how different the situation will be when your way of doing things enters the market.

To share an example from my own career, let me tell you about an annual gala event at GE Research that I had an opportunity to present at. It was a very formal event, very big stage, with a large audience, and I was told to tell our story very quickly. I was requested to talk about a sensor that we built for the oil and gas industry, but I refused to tell that story at the gala unless I went to the field and felt the oil, saw how the sensor was being used, saw where it was not being used, and put myself into the consumer’s shoes. I did exactly that and came back from the field with stories which could not be experienced from reports and data. Being out there and seeing the product in action enabled me to find more problems we could solve. The method of experiencing products first hand, really helps you tell the story better.

Ryan Foland: When you visit with customers, does it ever backfire?

Gopichand Katragadda: I wouldn’t say backfire, but you have to understand that ninety-nine times out of one hundred, the customer is going to have a gripe in some form or another. When I went to the refinery plant, they spent a lot of time with me. Because I was from the team that designed the actual parts, they wanted to let me know what the areas which they were having difficulty with. This feedback was very valuable, and when I returned, I made a point to address those issues, which we were very happy to.

The bad feedback also becomes part of the story. You need to be able to tell your full story -- not just on the positive side, but also about the failures. That makes you authentic. Remember, to connect you have to be authentic.

Ryan Foland: That is super straightforward advice, my favorite kind! When it comes to the vehicle in which you are able to tell stories, say public speaking, for example, do you have any tips or tricks that you have learned over the years that could empower the next generation of engineers? You're very confident onstage. Are there any things that have worked for you that you could share?

Gopichand Katragadda: I think one aspect of storytelling is that you have to start somewhere. The first time you tell a story, you will not like it. You just have to keep doing it and getting more comfortable. Each time you go up on stage, you must think about why you are the right person to be talking on this topic. What is the unique angle? Everybody has lived a life which is much different from others. Bring yourself to the story and share that. You will have a lot of confidence when you are sharing your story. It is nobody else's story.

Ryan Foland: I love that. Bring your story to the stage. I think that is going to be the title of this interview!

Gopichand Katragadda: Sounds good to me!