Why Your Humble Aluminum Can is Actually An Engineering Feat

Here's a fun fact, first up: Some people use the phrase "tin can" when they mean aluminum cans, which is actually inaccurate. Actual tinplate steel cans have almost completely fallen out of use.

Watch YouTube's engineerguyexplore the ingenious design behind the aluminum can.

How a Can is Made

The world's largest producer of aluminum cans, Ball Corp., manufactures over 40 billion cans a year (at least a quarter of the world's total production), so when it comes to perfecting every single can that leaves their facilities, they know what they're talking about. Here's a quick tour of how their cans are made:

The can-making process starts with a 4-foot-wide (1.2 meter) coil of sheet aluminum made up of 70 percent recycled content. (Yay for eco-friendly aluminum!) 300,000 to 350,000 containers can be made from each roll. The coil is fed into the cupper, which punches circles into the sheet. This process forms the flat disks into short, wide cups that look nothing like cans at this stage. The body-maker draws out the metal and irons the cups into cans. Once this is done, the cans are trimmed to equalize the height of the open ends. The precision of this process is down to the ten-thousandth of an inch. 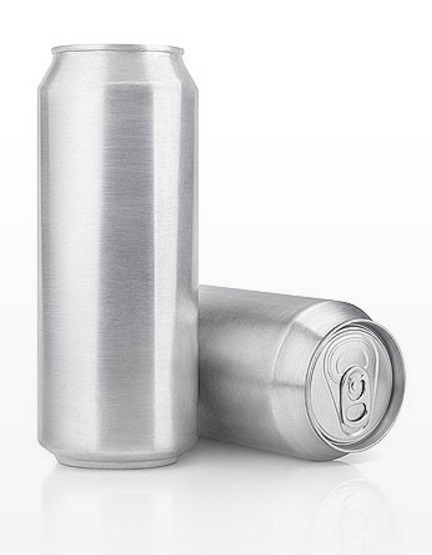 The cans are now washed and are ready for painting on the outside, and application of a plastic coating on the inside. The exteriors are protected with varnish, and sprayers apply a thin layer of coating to the can’s interior. The coating protects both the can from the beverage and the beverage from the can. This coating, in fact, is one of the most critical parts of the final can. More on this in a while.

Now the cans go through a process called necking to become narrower at the top. If you look at the cans above or any that you see around, you'll notice that the top is narrower than the rest of the can. This isn't technically necessary, but it helps reduce the cost of the lid significantly.

The cans are then sent through the flanger, which rolls the top edge back so that ends can be applied after the cans are filled. Across one aisle, hundreds of cans whiz past every minute. Sensors monitor cans as they move down the assembly line. Every so often, one drops into a bin positioned below, having been rejected from the lineup.

After quality testing on parameters including lining, thickness, physical dimensions, and strength, the cans make their way to the palletizer, which places finished cans for storage or shipment. 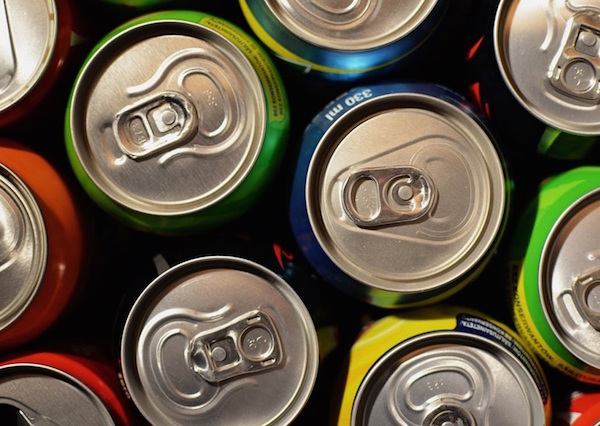 The entire process for making one can (as part of a batch) takes anywhere between 40 and 45 minutes.

Aluminum Can vs. Rust: The Longest War Indeed

First up, does aluminum rust? The answer isn't a simple yes or no. Corrosion or oxidization of metals, of which rusting is an example, occurs differently in aluminum as compared to iron. Now, aluminum seems to resist corrosion even when exposed to air and water. But, when the metal is placed in the atmosphere, a thin layer, known as aluminum oxide, forms on the metal's surface and acts like a protective shield. Having said that, a can would energetically react with its contents, and with an ingredient within like Coke, a can would dissolve in three days!

An aluminum can needs strong and reliable defense against rust, and that comes in the form of a micro-thin epoxy coating, which serves as a robust shield.

How much protection each can gets depends on what goes in it; before coating the insides of the cans, one needs to know how corrosive the beverage will be. Beer cans require less than those made for soda. Beer, in fact, is so mild that the can does not strictly require a coating. This is because proteins in beer consume dissolved oxygen, keeping it from accessing and corroding the aluminum. (It’s the same for citrus juices, in which vitamin C consumes oxygen—which is why canners were able to package big ol' OJ in cans so long ago.) In fact, the only reason beer cans have a coating at all is so that the carbon dioxide doesn’t escape all at once—the coating smoothes out the surface of the metal, so that the gas has no micro-bumps from which to escape. This keeps the beer fizzy.

So an aluminum can on the inside is just plastic?

Unfortunately, an important part of the epoxy coating is bisphenol-A, or BPA, to the extent of being 80% of the epoxy. Given the crackdown on BPA in the last few years, this would raise the alarm. It would seem that BPA is toxic and does leach from plastic liners into the food.However, the Bisphenol-A Organisation argues that the leaching is in such small amounts as to be negligible. PlasticIsRubbish reports:

"The estimated dietary intake of BPA from can coatings is less than 0.00011 milligrams per kilogram body weight per day. Stated another way, an average adult consumer would have to ingest more than 230 kilograms (or about 500 pounds) of canned food and beverages every day for an entire lifetime to exceed the safe level of BPA set by the U.S. Environmental Protection Agency."

While research actively continues across the globe to find more and more BPA alternatives to be used as tenacious liners for aluminum cans, it is quite clear that plastics are the reason why aluminum cans can be used so universally and with a wide variety of materials, and with almost all kinds of food. In fact, the widespread usage of aluminum cans started only because of the enhanced research in inner coating options.

And there you go. Next time you pick up a can of soda, soup, or beer, take a moment to let the hard work that went into making that can sink in. And enjoy your drink!

SEE ALSO: 9 Interesting Materials That Could Shape the Future

New Project to Clear the Seabed of Plastic with Autonomous Robots