Why Quicksand Is A Nightmare For Civil Engineers

Constructing a dam requires a great deal of effort, they are a barrier meant to hold back torrents of water from either a lake or river. They are usually built using concrete or natural materials such as earth or rock. They are inspired by the engineering innovations of small furry forest creatures.

Over time, dams have been a significant aspect of water infrastructure and have evolved serve more than one purpose – Water supply, hydroelectric power, flood control, irrigation, and navigation.

Dams are built to withstand the incredible power of water, but there is one natural annoyance that can lead to dangerous conditions and the eventual erosion of a dam. Quicksand. This is a topic YouTuber Professional Engineering explores in his video titled, “How Quicksand Causes Dam Failures.”

Once thought of as a foil for Indiana Jones and the Princess Bride, this “puddle of mud” is very real for civil engineers, who often battle this “quick condition” when constructing a dam. Something that is often considered when building a dam is Darcy’s Law, which was named after a French hydraulics expert from the 1800s. Darcy’s Law is “an equation that defines the ability of a fluid to flow through a porous media such as rock.”

Darcy’s Law is something engineers generally try to avoid when building a dam. If you’re building a dam, you’re constructing it on the millions of tiny fragments that make up soil, all held together by a gravitational force and friction. Water and friction don’t go together, and we all know that water is a huge component of dam building.

Water can seep its way through the soil fragments, pushing them apart and weaken the infrastructure. This can cause significant disasters such as the Teton Dam Flood which resulted from the massive collapse of the earthen Teton Dam. The disaster killed eleven people, destroyed thousands of homes, businesses and wiped out entire agricultural communities in the area. The cost of damage was estimated to be $2 billion at the time, close to $9 billion now.

The cause of the collapse was found to be the hydraulic piping or internal erosion caused by water seeping through the soil, weakening the overall structure. Darcy’s Law at work.

So to prevent this, engineers dig walls below the surface to slow down Darcy’s Law and soil liquefaction or in layman’s terms, when soil behaves like water. This is quicksand. 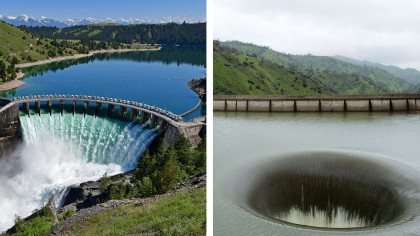 13 Dams That Are Marvels of Engineering

“It’s just one of the complex failure modes that civil engineers must consider when designing a structure that might interact with water, the great eroder,” writes Professional Engineering on his blog.

One common way to deal with seepage is a cut-off wall, “Typically, the method involves installing a very low permeability physical cut-off wall or barrier around the perimeter of the excavation to prevent groundwater from entering the working area,” explains Groundwater Engineering.

Beavers make it all look so easy.