Why Was the Robotic Arm Invented?

Robotic arms have a long and rich history. Let's look at where robotic arms got their start and see what the future holds for these machines.

Today, we use robotic arms for everything from building a computer's motherboard to assisting with open heart surgery. We've come a long way from the first incarnation of robotic arms.

When they first became available in 1954, these arms were controlled with electronic servo motors, programmed with paper tapes and were only capable of rudimentary commands. Let's take a look at the history of robotic arms, and where the technology is going in the future.

The concept of robotic arms isn't a new one. It dates back to the late 1400s. In the 1950s, researchers studying Leonardo da Vinci's notebooks found drawings and sketches of everything from robotic arms to complete humanoid figurines that could have theoretically run on the clockwork technologies available at the time.

These devices used pulleys, weights, and gears to provide semi-autonomous motion, centuries before we ever imagined using them for assembly or manufacturing. A 2002 prototype of this robotic knight, based on da Vinci's blueprints, proved the concept — the knight could walk and wave without any intervention from its operator.

Four years before inventors filed the first robotic arm patent, Isaac Asimov published I, Robot, and introduced the world to the Three Laws of Robotics:

-A robot may not injure a human being or, through inaction, allow a human to come to harm.

-A robot must obey orders from humans, except where such instructions would conflict with the First Law.

-A robot must protect its existence as long as such protection does not conflict with the First or Second Laws.

Inspired by these laws, and the use of robotics in the book, engineer Joseph Engelberger and inventor George Devol filed for a patent for a programmed article transfer device — the first incarnation of the robotic arm. The goal was a version of the medical Hippocratic Oath, to do no harm, employing these robots in positions that would normally be harmful to humans.

By 1961, General Motors employed roughly 450 of these robotic arms in their diecasting plant in Trenton, N.J.

In 1961, Devol and Engelberger launched Unimation, Inc. — a company focused on the creation of industrial robots. The Unimate 1900, the same simple arm employed in the GM diecasting factory, became the company's flagship.

Engelberger showcased it at a trade show at Cow Palace in Chicago, and even took it on Johnny Carson's Tonight Show, where the robot wowed viewers with its ability to knock a golf ball into a cup, pour a beer and also conduct the show's band!

These tricks won over the audience and brought the concept of industrial robotics into the minds of the nation.

Automotive manufacturing isn't the only application for robotic arms. In 1963, researchers at the Rancho Los Amigos Hospital developed the Rancho Arm to help move disabled patients. It was the first computer-controlled robotic arm and was equipped with six joints to let it move like a human arm.

Not content with introducing industrial robotics to the United States manufacturing market, Engelberger traveled to Tokyo, Japan, in 1966 to lecture about his creations.

His audience was 700 strong, and after a two-hour Q&A, he became convinced Japan was the next profitable market for Unimation. In 1967, Unimation partnered with Kawasaki Aircraft and Kawasaki Heavy Industries to market and produce their robots in Japan. These two Japanese companies are the ancestors of Japan's Kawasaki Robotics, which still exists today.

Taking a page from the Rancho Arm's playbook, Marvin Minsky created the Minsky Tentacle Arm. This robotic arm had 12 joints, and users could control it with a computer or a joystick. Minsky designed the arm for use in medicine rather than manufacturing, capable of lifting a person but gentle enough to do so without harming them.

In 1969, Unimation, Inc. received a massive order from GM. The automotive manufacturer was rebuilding its plant in Lordstown, Ohio, with the goal of creating the most automated automotive plant in the world. By the time the factory was up and running, it was capable of producing 110 cars every hour. This rate was more than double the production rate of any other plant at the time.

This productivity jump encouraged other car manufacturers, from BMW and Volvo to Leyland, Fiat and Mercedes-Benz, to do the same, effectively securing Unimation's European market in the process.

1969 also proved to be the last year Unimation had a monopoly over the robotics market. Nachi Robotics launched an industrial robotics program in 1969 in Tokyo.

In 1973, Germany joined the robotic arms race. Its company, called Kuka, developed the first industrial robotic arm driven by six electromagnetic axels. Dubbed "Famulus," this robotic arm was the first of its kind, moving the industry away from the traditional hydraulically operated arms.

1974 was an exciting year for robotics. David Silver, at the time a student at MIT, invented the Silver Arm. Designed for small parts assembly, it was the first robotic arm to feature touch sensors to provide tactile feedback to its operator.

Yaskawa Robotics introduced its first robotic arm in 1977 — the Motoman L10. This robot had five axes and could manipulate up to 10 kilograms, or 22 pounds. ASEA also introduced two electric industrial robots which were programmable with microcomputers. Unimation purchased Vicarm toward the end of this year as well.

The new alliance between Unimation and Vicarm proved fruitful. In 1978, they created the PUMA — Programmable Universal Machine for Assembly. This assembly robot is still in use in many research labs to this day. In 1979, Nachi also developed a motor-driving arm explicitly designed for spot-welding.

While 1974 might have been an exciting year for robotics, the 1980s proved to be the most significant decade for industry growth. In 1980, robotics startups or new robots hit the market nearly every month.

1981 brought about the introduction of the first direct-drive arm — a robotic arm with motors installed directly into each of its joints. It was the most accurate robotic arm of its time.

1981 also saw the introduction of pneumatic robotic arms — ones that use compressed air instead of electricity or hydraulic fluid.

In 1985, OTC Daihen began supplying robots to the Miller Electronics company, and ASEA and BBC Brown Boveri Ltd. merged into a single company with each member holding half of the company's assets. Nachi established a branch in the United States, and Yaskawa Robotics introduced a new control computer that was capable of controlling up to 12 axes at a time.

1992 saw the introduction of the world's first intelligent robot prototype, which came out of FANUC's Robot School that was established the same year. The Motoman ERC, which originally became available in 1985, got upgraded in 1994 to be able to handle up to 21 axes.

It soon lost ground to the XRC controller, which could control up to 27 axes across up to 4 robots. This controller debuted in 1998, backed by Honda for use in their factories.

Robotic arms also saw the first applications in prosthetics in this decade. In 1993, a Scottish man named Campbell Aird received the first cybernetic robotic arm after he lost his arm to muscular cancer in 1982. Aird could manipulate this arm by flexing the muscles in his shoulder.

2000s — Innovation Into the Modern Day

The 2000s, through today, have proven to be the most exciting time for the robotics industry. Advances in technology enabled robots to become even more efficient and effective in their duties. 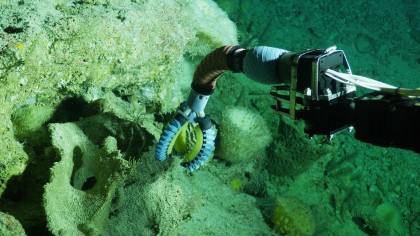 2000 saw the introduction of the da Vinci Surgical System — a collection of robotic arms capable of precise microsurgery. To date, this system has been installed in more than 1,700 hospitals and performed three-quarters of a million surgeries.

Nearly every automotive manufacturer in the world now has robotic arms installed in its factories, speeding up the assembly process. In a single shift, the average factory can now assemble more than 200 cars — more than 600 if they run the factory 24/7.

The history of the robotic arm is long and varied, from da Vinci's original designs to the advanced robotics that are widespread today. Right now, robots are roaming the surfaces of planets in our solar system, collecting data that will advance our knowledge of our universe for years to come.

The applications for these robotic arms will continue to grow and evolve, and our imaginations will only limit its potential applications. We can't wait to see where this technology goes in the future!