Why Was This Greek Town Covered In a Spider Web?

If you are scared of spiders you might not want to visit this Greek town anytime soon.

Back in September of last year, parts of a Greek town were blanketed in spider webs. But where did it come from, and is it dangerous to humans?

If you suffer from arachnophobia you might want to click off now. But if you are brave enough join us as we uncover the reason behind the huge web of Aitoliko.

How big was the spider web at Aitokilo?

Back in late September of 2018, major news outlets like CNN reported on an enormous spider web that had appeared along the shores of Aitoliko in Greece. Whilst this does sound like something out of a horror movie at first glance, it turns out the residents weren't concerned at all.

Trees, plants and even boats started to become draped in an enormous spider web that was home to thousands of spiders. Quite spooky indeed.

The enormous web stretched for around 984 feet (300 meters). Whilst this might sound strange to some, local residents are actually used to the phenomenon. A similar web appeared back in 2003.

Giannis Giannakopoulos spoke with CNN about the giant web and even supplied some spooky, dare we say beautiful, images of it.

"It's natural for this area to have insects, no one is especially worried," Giannis told CNN.

"But I have never seen any spider webs this big in my life."

The town has seen its fair share of invasions

The peaceful Greek town of Aitoliko might seem sleepy today, but it has seen its fair share of invasions in the past. Massive spider webs, whilst spooky for some, pale in comparison to the town's history.

During the 9th Century, the site of the current town started out as a Byzantine fortress which later developed into a town seen today.

During the Greek War of Independence against the Ottoman Empire, Aitoliko experienced no less than three Turkish sieges. All failed, and the area became part of Greece shortly after.

Where did the web come from?

According to zoologists and arachnologists like Maria Chatzaki, this kind of web is rare but has also appeared in other parts of Greece. They are always created by the same species of spider, the Tetragnatha extensa. 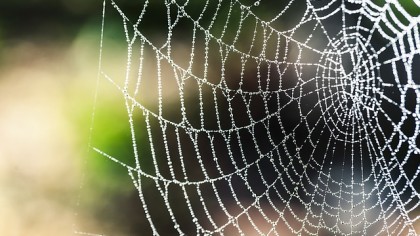 These diminutive little creatures usually grow no longer than 2 centimeters in length. Yet despite their size, they are able to build some quite impressive structures - as seen at the town.

These little spiders are often also called stretch spiders owing to their elongated bodies. They also have the incredible ability to run across water faster than they can move on land.

These little spiders tend to build sheet-like covers, called web mats, rather than more traditional webs, that act as ginormous mating nests. But they do also form regular webs for hunting purposes.

But why did the web get so big? According to local biologists, like Fotis Pergantis, there is one main reason for it: an abundance of the spiders' favorite prey.

These spiders have a particular penchant for gnats. These small mosquito-like insects have very short lifespans of a few days, and most of their lives are spent reproducing.

These gnats tend to thrive in hot, humid temperatures and can continue to reproduce so long as the climate suits them.

Temperatures were ideal for gnat reproduction at the time, and their population boomed.

"When these temperatures last long enough, we can see a second, third and fourth generation of the gnats and end up with large amounts of their populations," Pergantis told CNN.

With an abundance of food around, the spiders' population responded in a classic predator-prey relationship.

"It's the simple prey-predator phenomenon," Pergantis also told CNN. "It's the ecosystem's natural reactions and once the temperatures begin to drop and the gnat populations die out, the spider populations will decrease as well."

The vast abundance of food allowed the spider population to respond in kind.

This little spider is commonly found around the Northern Hemisphere. Its name is derived from its elongated body that tends to be around 11mm long.

The can be found anywhere from North America to coastal regions of Europe. They are also very common in the United Kingdom.

Their bodies are cream colored but do vary from cream to yellow. On the underside, there is a thick black central band, with a silvery band on either side.

The spider tends to adopt a straight line posture when alarmed or threatened. Tetragnatha tends to live in low vegetation, as seen at the town, in damp areas and feeds on flying insects, like gnats.

Like most spiders, males tend to be smaller than the females of the species. Typically their bodies are around 9mm long. Their legs are particularly long and tend to be dark yellow in coloration.

Adults tend to be seen between May and September in the UK and May and July in places like Alaska. During mating, there is little courtship between males and females.

Both partners lock jaws in an attempt to stop the female from eating the male before coitus. Eggs' sacs are globular and tend to be covered in grey tufted silk.

Are the spiders and their giant web dangerous?

Whilst the emergence of such a giant web might conjure up images of films like Arachnophobia, they are completely harmless to humans.

In addition, they will not cause any sort of damage to the animal and plant life of the ecosystem. The web is expected to disintegrate naturally over time.

“These spiders are not dangerous for humans, and will not cause any damage,” biologist Maria Chatzaki told Greek news websites.

“The spiders are taking advantage of these conditions, and are having a kind of a party. They mate; they reproduce and provide a whole new generation.”

She noted that the phenomenon had been seen before in the region in 2003. Maria reassured people that the spiders would soon die off, and the web would degrade naturally, leaving the vegetation undamaged.