China's AI industry appears poised to take the lead in the most important arms race in human history.

To talk about artificial intelligence today usually involves talking about automation, lost jobs, and whether your Uber or Lyft will be a self-driving vehicle in 5 years time. Taking a step back from the apps in our phones, however, and what begins to emerge is a larger fight between the US and China, AI superpowers whose contest will likely decide the course of human civilization.

State Of Affairs: The US and China’s AI Arms Race

In January 2019, the UN’s World Intellectual Property Organization (WIPO), whose role is to help spread ideas and innovation around the world, released a report that highlighted the rapid advance of AI patent applications across the world.

According to the report, the United States and China’s AI-related patent applications outstripped every other nation’s by far. “The U.S. and China obviously have stolen a lead. They’re out in front in this area, in terms of numbers of applications, and in scientific publications,” said Francis Gurry, WIPO Director-General, at a news conference last month announcing the report.

In the US, the lead was taken by private industry. Computer monolith IBM held 8,920 patents related to artificial intelligence, followed by Microsoft with 5,930.

This isn’t surprising, as IBM has spent considerable time and money investing in its IBM Watson cognitive computing platform, while Microsoft has been one of the global software leaders for decades now.

China, meanwhile, has been heavily represented by academic institutions in global patent applications. China’s AI development in universities and academia isn’t surprising either, given the Chinese government's dedicated focus on AI development.

Academic institutions would have a direct line to government funding and would be the easiest place for the government to spend its money in AI research. The report also states that China’s AI investment in deep-learning technology is especially strong.

To give the scale of the transformation taking place, patents for machine learning technology, the kind that helps ride-sharing apps navigate around detours, grew at an annualized rate of 28% between 2013 and 2016. Similar trends have been seen across the entire AI industry.

China’s greatest strength is that it doesn’t have the kinds of established industries that have a vested interest in seeing AI held back for fear of job losses or disruption, which is a problem for European countries in particular.

Moreover, China is investing a massive amount of money and other resources into AI technology. The Chinese government’s 2030 plan hopes to build a $1 trillion dollar AI industry in China in little over a decade, and it isn’t an impossible goal, some believe.

"While 12 years seems like a short amount of time to achieve such an ambitious target, it's not outside China's scope," said William Weightman, Fulbright Fellow in China researching intellectual property. "The world should not underestimate China's ability to mobilize a vast amount of resources to accomplish its goals."

China’s AI investments from private sources alone total more than $4.5 billion between the years 2012-2017, as evidenced by Alibaba’s recent acquisition of SenseTime for $600 million.

"SenseTime is the perfect case study in the difference between Chinese and Western technological development," wrote co-founder of DataTrek Research, Nicholas Colas. "Artificial intelligence, and especially the A.I. that powers visual analytics, is a critical technology for a raft of new products.

"The Western companies have their own advantages, to be sure. But the Chinese model of government sponsorship and private capital is coming on very strong. SenseTime may be the hit investment of the moment coming out of this approach, but it certainly won't be the last."

The United States is the leader in AI research, by far, but its dominance isn’t guaranteed. In its favor, the US has an extensive technical education system that trains the best and the brightest minds from around the world and the US Military has been at the forefront of US' AI development from the very beginning.

“As numerous studies have made clear, the department of defense must integrate artificial intelligence and machine learning more effectively across operations to maintain advantages over increasingly capable adversaries and competitors,” wrote then- US Deputy Defense Secretary Bob Work in 2017, in a memo announcing the establishment of the Algorithmic Warfare Cross-Functional Team to work on Project Maven.

Project Maven is a US Department of Defense project that focuses on computer vision to autonomously extract objects of interest from video and still imagery to help process the overwhelming amount of video and photographic intelligence that the military gathers on an ongoing basis. They know that this is essential to maintaining America's military edge against adversaries who are becoming increasingly capable.

“We are in an AI arms race,” said Marine Corps Col. Drew Cukor, chief of the Algorithmic Warfare Cross-Function Team in the Intelligence, Surveillance and Reconnaissance Operations Directorate-Warfighter Support in the Office of the Undersecretary of Defense for Intelligence. “It's happening in industry [and] the big five Internet companies [Apple, Alphabet, Amazon, Facebook, and Microsoft] are pursuing this heavily. Many of you will have noted that Eric Schmidt [executive chairman of Alphabet Inc.] is calling Google an AI company now, not a data company.”

While the Department of Defense may see the challenge clearly, others in the US government do not. The current immigration controversies in the United States have led to cuts in the number of H1B visas that are granted to highly-skilled persons not born in the United States.

This visa would allow newly minted scientists and engineers to stay in the US and continue educating themselves and training for jobs here in the US, to the country's considerable benefit, but are instead being pushed out of the country where China's AI industry is more than willing to recruit them.

What’s more, recently, the United States decided to cut it’s budget for science research and development by 15%, prompting concern over its ability to retain its position as the global technology leader. 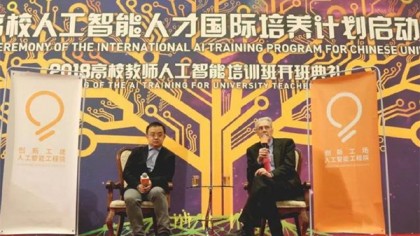 "Sadly, when it comes to science and innovation,” said distinguished fellow and adjunct professor at Carnegie Mellon University's College of Engineering, Vivek Washwa, “the U.S. is moving in reverse by cutting funding for research, denying climate change and cutting investments in education,"

Joshua Gans, co-author of Prediction Machines: The Simple Economics of Artificial Intelligence and a business professor at the University of Toronto, agrees.

"President Obama discussed [AI] on numerous occasions," he said. "[Research funding cuts] is obviously bad news in terms of its ability to nurture scientific leadership. It is shortsighted and will harm the U.S. in the medium-long term."

While China is rapidly developing smart city technology,  Americans' views towards privacy and data security could hold American cities back from keeping pace with China, who does not have nearly the same constraints around the collection and use of its citizens' data.

Most Important Technological Race Ever

The greatest challenge for the US is that the importance of the AI arms race isn't widely seen, whereas China has AI development as its key technological goal for the next decade and a half. The US may have the lead now, but arms races and even wars are not always won by the most powerful nation or who has the lead at the start; the winner is sometimes the side that simply wants it more.

If the result of the arms race between China and the US leads inevitably to a system of artificial general intelligence, then this will almost certainly be the final arms race humanity ever engages in and the winner will occupy a unique position in human history.

It wouldn’t be an understatement to say that whoever wins this AI arms race will be positioned as the global leader going into the 21st century and beyond. Artificial intelligence has been called mankind’s last invention after which we will enter into an environment that is entirely unpredictable and alien to human experience; and while it's anyone’s guess as to who will come out on top, as it stands, China's AI industry clearly seems to be in this race to win it.

Porsche Engineering Legend Passed Away at 90