Will We Actually See a Black Hole's Event Horizon Next Week?

Next week, the Event Horizon Telescope will release the results of their attempt to take the first ever picture of the "shadow" of a black hole's event horizon.

The European Southern Observatory has said that next week astronomers are about to make a major announcement regarding the Event Horizon Telescope's study of the supermassive black hole Sagittarius A*, which is widely anticipated to be the release of the first ever picture of the event horizon of a black hole.

In April 2017, the Event Horizon Telescope (EHT) attempted to capture an image of the event horizon of the supermassive black hole Sagittarius A* (Sgr A*) which sits in the middle of our galaxy surrounded by a thick shroud of dust and gas.

In order to accomplish this feat, scientists essentially had to rig a network of radio telescopes around the world to coordinate their efforts in order to create a virtual radio telescope 8,000 miles wide.

Using what’s known as very long baseline interferometry (VLBI), the EHT can increase the resolution of the network of radio telescopes once they are pointed at the same target, in this case Sgr A*.

The telescopes recorded data for several days and gathered 1,000,000 Gb of data from telescopes as far away as Antarctica, so much in fact that it was quicker to just fly the hard drives to processing labs in the United States and Germany than to try and upload them over an Internet connection.

The first “groundbreaking” result of that work is finally going to be announced on April 10 at 13:00 UTC, 9:00 EST, while the event itself will be livestreamed.

What the Event Horizon Telescope has Seen of Sagitarius A* Already

Preliminary results from the EHT were published in a paper [PDF] in The Astrophysical Journal earlier this year revealed some startling new information about Sgr A*. Sgr A* has about 4 million solar masses and is surrounded by dense layers of gas and space dust that would normally scatter any radiation coming from the other side of it, heavily distorting the image and obscuring our previous efforts to see past it.

Now, using VLBI, researchers are able to correct the interstellar scattering produced by the thick wall of material surrounding the supermassive black hole and provided a clear image of the immediate area around Sgr A*. The preliminary images of the immediate area around Sgr A* showed a very symmetrical morphology for the object and a surprisingly small source of radio waves and other radiation coming from the object. 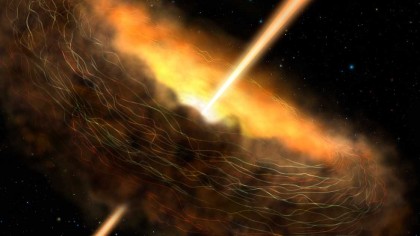 When a star or other material is consumed by a black hole, it is first torn apart by the sheering forces of the incredible gravity around the event horizon. The energy generated by this churning of material actually results in a lot of the material not actually being consumed but instead ejected back out into space in very narrow jets at nearly the speed of light from the poles of the black hole.

This process, violent and at very high energy, produces a lot of radio waves that follow the path of the jets. In the case of Sgr A*, the source of the radiation coming from the object is actually rather small, suggesting one of two possibilities.

"This may indicate that the radio emission is produced in a disk of infalling gas rather than by a radio jet,” said Sara Issaoun, a Ph.D. Candidate at Nijmegen University in Oslo, and lead author of the paper. “However, that would make Sagittarius A* an exception compared to other radio-emitting black holes."

We'll have to wait until next week to find out the answer to that, but whatever is revealed, it's likely to be one of the most significant events in the history of science.