George Orwell wrote 1984 almost 70 years ago, but the themes it depicts are becoming more and more relevant every day.

The world can seem pretty crazy of late. Fiction and lies blend together while countries split themselves fighting over mere opinions. Wars both near and far seem to have impacts that are immediate and ineffable. An air of existential dread hangs over every governmental action and frankly, it is just WAY too stressful. 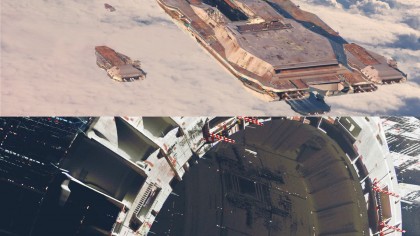 But if you're looking to get all of that off your mind this holiday season by shutting the world off and curling up with a good book, may I NOT suggest George Orwell’s 1984.

Reading this claustrophobic fable of totalitarianism now, 70 years after its publication, is still a shock. First comes the jolt of recognition to what the author describes: Doublethink, Newspeak, the Thought Police, the Ministry of Love that deals in pain, the Ministry of Peace that wages war, the novel-writing machines that make pornography to distract the masses—It all seems so eerily familiar despite its ridiculousness. Then the anxious apprehension starts to creep in. One starts to wonder where we have gotten to on the roadmap to a hell Orwell described.

Is 1984 prophetic? Possibly. But is it stirring, moving, creative, and helpful? Undeniably, yes. It’s amazing how a book published before the advent of computers and written out of the battered landscape of total war, in a nation hungry, tired, and grey can feel more relevant than ever before. But it ultimately begs the question; are we really on our way to an Orwellian dystopia of mass totalitarianism and control?

As always, the answer to such a question is not really a simple prospect.

Some background on the book:

For those who might need the refresher, “1984” is a sci-fi, dystopian novel written by George Orwell in the summer of 1949 and set in—obviously—the year 1984. The book weaves the tale of a future Britain, now named ‘Oceania’, which has become a totalitarian, surveillance state.

Winston Smith, the protagonist, works as a censor in the Ministry of Truth, the government division tasked with the constant updating of history to suit present circumstances and shifting alliances. He and his fellow workers are controlled and monitored in this as a mass collective by the all-seeing and all-knowing presence of Big Brother.

Big Brother is the charismatic, wise leader who enjoys an intense cult of personality and yet… may not actually exist. Whether or not that’s the case though is not important. Thought Police will round up and persecute any person who betrays Big Brother by expressing individualism or independent thinking.

At first, Winston seems like the perfect rank and file employee of the system, but secretly he hates the Party and dreams of rebellion against Big Brother. He’s finally able to manifest this rebellion by entering into a forbidden relationship with a fellow employee, but Big Brother sees all and he is quickly found out.

The Party then tortures and brainwashes Winston until, by the end of the book, he is nothing more than a cog in the system, incapable of doing anything but blindly loving and trusting Big Brother.

Did I forget to say spoiler alert?

Living in a post-truth world:

Reading 1984 today, the thing that most jumps out as a fantasy become real is this idea of distorting reality to suit a particular narrative. We would have called this sort of thing propaganda, and then maybe “truthiness”, but now it’s probably best known as “alternative facts.”

So too, in the real world, when state leaders and spokespersons can invent crimes and massacres, denounce the media for departing even slightly from the official party line, and entirely dismiss scientific findings, citizens have to decide whether they will likewise engage in doublethink-- if they will learn the “newspeak” and concede that two plus two is whatever they're told it is.

As much as we might get distracted by the resurgence of totalitarian leaders and the distortion of facts around the world, the main thing that 1984 parallels in the modern day is the idea of the surveillance state. Many critics thought 1984 would fade away as a period piece, filled with technology and hubris that simply wasn’t believable.

But instead of fading away, Orwell’s masterpiece has become more relevant than ever as our world becomes more technologically connected and more dependent on “big data.”

Nowadays, governments regularly kill people in nations with which they are not officially at war by using remote-controlled aircraft. And now metadata collection — the gathering of trillions of bits of information that the intelligence community analyzes in order to recognize previously unseen patterns — allows governments to quietly compile dossiers on the behavior of millions of individuals.

In 1984, surveillance took the form of television screens that watch you, and the constant fear that the people around you might take one wrong word as a sign of dissent. The reality of individual surveillance today though is something much more insidious, and something that even Orwell never imagined.

Today it is social media that collects every gesture, purchase, and comment we make online, and feeds an omniscient presence in our lives that can predict our every preference. Modelled on consumer choices, where the user is the commodity that is being marketed, we are no longer fully in control of the individual realities that we inhabit.

And the seizure of these realities through the harvesting of our preferences for things like political campaigns is now even distorting democracy.

Another uncomfortable parallel to be found in 1984 is with how enemies to a regime can be created arbitrarily by whipping up popular feeling through propaganda. It is hard to refute that today, even the most well-meaning movement will travel faster through a populace if outrage is at it’s core, but in his description of the ‘Two Minutes Hate’ Orwell also foresaw the way in which online mobs work today.

In the book, people are made to regularly watch violent films, about which the protagonist says, “it was impossible to avoid joining in…A hideous ecstasy of fear and vindictiveness, a desire to kill, to torture, to smash faces in with a sledgehammer, seemed to flow through the whole group of people like an electric current”.

Now political, religious and commercial organizations all trade in this currency of whipping up feelings. Orwell uncannily identified the willing collusion in hate that such movements can elicit: the only question is if we might observe it in ourselves too…

If metadata and social media are the future of the surveillance state, then we need look no farther than China to see it’s present.

If you can imagine putting the government in control of the fleeting measures of importance and self value social media tends to provide us, you will start to have some idea of the “Social Credit” system that’s being rolled out in China. It’s a hybrid of credit ratings, behavioral analysis, and state blacklists announced in 2015 as a way of assigning every Chinese citizen a score based on their “sincerity”, and to reward high achievers.

Of course, there is an obvious dark side to this system. People whose scores are low—many of whom just happen to be critics of the government and corruption—find themselves unable to travel, without easy access to medical checkups, or even unable to enroll their children in certain schools.

And because an authoritarian state lurks behind the system, the chance of appealing successfully against a score is very low. And new reports of Chinese firms' plans to integrate facial recognition of all 1.3 billion of its citizens into its existing system of billions of networked surveillance cameras makes the correlations with Big Brother harder and harder to ignore.

It’s easy for anyone living outside China to regard Social Credit as an anomaly peculiar to that country alone, and not something that could ever affect the rest of us. But we own the same smartphones and generate the same data as Chinese citizens. We’re already being scored in many ways, both above and below the radar. And those “scores" are already starting to have real-world consequences.

It would seem that the key to avoid slipping into a Chinese style system- or worse- is to stop all of this data being pooled together and analyzed. Of course, this comes with a significant cost. In the modern world, convenience is often gained at the expense of privacy. And doesn’t the utopian dream of futuristic smart cities- which are designed to help governments govern and citizens thrive- rely on just that type of efficiency?

How likely is a truly Orwellian future?

At the end of the day, this is the question that we need to face. Are we headed to an Orwellian world of misinformation, torture, and totemic hatred? Most experts will tell you: “Probably not.” Only to quickly add, “as long as we stay vigilant.”

It’s a somewhat unsatisfying answer, but it’s the truth. Technology and the sharing of our data have become ingrained into our society, and in many ways our lives are much better for it. But the temptation for strong-men and oppressive governments to use that data, and the manipulation of our basest instincts to solidify their own power will always exist as well.

That is why we as a global community should take the recently renewed popularity of dystopian novels like 1984, Yevgeny Zamyatin's “We”, Aldous Huxley's “Brave New World”, and Margaret Atwood's “The Handmaid's Tale” as a very good thing. It tells us that people are recognizing the threat at hand, and awareness of any problem is the first step in addressing it.

The true terror in 1984 is ultimately the annihilation of the self and the destruction of the capacity to recognize the real world. Orwell’s work is not being subtle, or trying to look down on common people for falling prey to this: he understands how hard it is to get things right. However, his story pins down the unsettling horror of a world where people are stripped of their essential freedoms as they have fewer and fewer words to use to defend them, and whose thinking is distorted by blind ideologies.

All over the world, where tyrannies rule, 1984 is banned. But of course, it is still pirated, digitally downloaded, and printed into false covers. And sales have surged too in countries that have always been known as stable democracies.

It is not only that we live in a world transformed by Orwell’s insights in that they have shaped how we see oppression, but also that 1984 has become a practical handbook for handling difficult times.

Ultimately, it helps us to remember that knowledge is a kind of strength and we are all being tested.