Windmill Aflame: Why Wind Turbine Fires Happen, How Often and What Can Be Done About it

By  Robin Whitlock
Nov 21, 2015
The aftermath of a wind turbine fire in Illinois youtube video by Elginet Aerial Photography

According to an article published by Fire Safety Science, the peer-reviewed publication of the International Association of Fire Safety Science, one of the major challenges faced by the global wind energy industry is the tendency of wind turbines to catch fire, a problem that the article claims is not being fully reported.

The study was carried out by researchers from Imperial College London, the University of Edinburgh and SP Technical Research Institute of Sweden, who conducted a global assessment of the world’s wind farms, representing around 200,000 turbines. The research team found that ten times the number of fires are occurring worldwide than are actually being reported, a total number of 117 fires annually as opposed to a reported number of 11.7.

“Wind turbines are viable sources of renewable energy that can assist the world to reduce emissions and help wean us off fossil fuels” said Dr Guillermo Rein, from the Department of Mechanical Engineering at Imperial College London. “However, fires are a problem for the industry, impacting on energy production, economic output and emitting toxic fumes. This could cast a shadow over the industry’s green credentials. Worryingly our report shows that fire may be a bigger problem than what is currently reported. Our research outlines a number of strategies that can be adopted by the industry to make these turbines safer and more fire resistant in the future.”

However, the study is not without its critics. Chris Streatfeild, Director of Health and Safety at wind and marine energy trade association RenewableUK responded by stating that although the wind industry welcomes any research that will help to improve safety standards, it also challenges a number of the assumptions made by the report, including the questionable reliability of the data sources and a failure to understand the safety and integrity standards for fire safety that are standard practice in any large wind turbine.

“There is also a lack of context in the research relating to the actual level of fire risks present to workers and members of the public,” said Mr Streatfield. “Wind turbines are designed to international standards to meet mandatory health and safety standards including fire safety risks. State of the art monitoring systems ensure that the vast majority of turbine fires can be dealt with quickly and effectively. This is supported by an HSE-commissioned report in 2013, which concluded that the safety risks associated with wind turbines are well below all other comparable societal risks. The industry remains committed to promoting a safe environment for its workers and the public, and no member of the public has ever been injured by a wind turbine in the UK.”

Indeed, wind turbine fires are far less common than fires occurring in other energy industries, such as the oil and gas sector, in which there are thousands of fires per year. According to GCube, an insurance underwriter serving the wind industry, only three or four turbine losses per year can be attributed to turbine fire, out of a global portfolio of more than 30 gigawatts (GW). That translates into just one turbine in 7,000 catching fire per year.

DNV GL includes damage to turbines, as well as total destruction, in its assessment of the risk from fire, thereby generating a figure of one turbine in 2,000 per year catching fire. This also includes older turbine models operating in countries where operations and maintenance procedures are less stringent.

The biggest risk to wind turbines is blade failure, rather than fire. Even so, the economic impact of wind turbine fires on wind energy developers, when such incidents occur, can be considerable, given that each turbine costs in excess of £2 million and generates an estimated £500,000 per year.

So, what can be done about this?

The main reason why there is such a large risk of a fire occurring in a wind turbine is because the wind turbine nacelle is a space in which there are highly flammable materials located in close proximity to machinery and electrical wiring. These materials include hydraulic oil and plastics. For example, a 1.5 MW wind turbine can typically contain 900 liters of lubricating and cooling oil, and 1.5 MW machines are now usually on the smaller side of the wind turbine product range due to increasing development and innovation in the last few years, leading to much larger turbine models. Meanwhile, the nacelle itself will almost certainly be made of flammable fibre-reinforced plastic (FRP) and will contain acoustic insulation material which is also flammable.

If the mechanical or electrical components within the turbine nacelle overheat or develop a fault, they can ignite and start a fire. This can then be fanned by the high winds the turbines are designed to exploit. Once a fire starts in a wind turbine it is extremely difficult to put out, due largely to the remote location of the wind farm or individual wind turbine and the height of the turbine itself.

The study claims that, according to the wind energy industry itself, wind turbine fires represent 10 to 30 percent of reported wind turbine accidents, although an accurate picture of the situation is hard to obtain because official reports concerning fires are often incomplete, biased or contain information that is not publicly available. When wind turbine fires occur, they almost always result in considerable downtime or the total loss of the turbine, but the good news, according to the study, is that the ratio of fires per turbine has decreased substantially since 2002.

The research team suggests that the industry could mitigate the risk by installing fire protection measures, such as lightning protection systems, non-combustible hydraulic and lubricant oils and heat barriers to protect combustible materials. Wind turbine manufacturers could also avoid the use of combustible materials and introduce comprehensive monitoring systems in order to provide a constant check on the condition of their turbines. Smoke alarms could also be fitted inside the turbine nacelle in addition to fire suppression systems using water or foam to douse the fire.

These recommendations imply that such measures aren’t being introduced already, but is that entirely accurate?

It is important to bear in mind that there are a whole host of standards and guidelines maintained by the industry for exactly this reason. In Europe, the most important of these is section 1.5.6 of the 2006/42/EC machinery directive, which applies to all wind turbine models and stipulates that they must be constructed “in such a way as to avoid any risk of fire or overheating posed by the machinery itself or by gases, liquids, dust, vapors or other substances produced or used by the machinery.”

According to Jamie Scurlock, head of turbine technology at RES, it is extremely hard to design a wind turbine model that eliminates all risk of fire. Industry standards also do not stipulate how a wind turbine should be designed and there are also various local regulations to contend with, which will differ depending on the location in which the turbine is deployed. 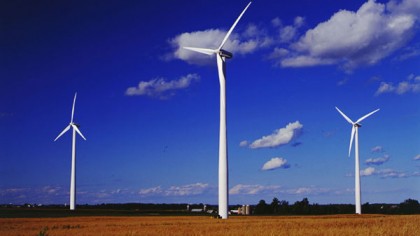 An important safeguard within the industry is compliance testing. In March this year, DNV GL issued its SE0077 certification of fire protection systems for wind turbines, which stressed the importance of pre-approved components and fire-protection and prevention systems. These include smoke and heat detectors and control and indicating systems, all of which have to be tested in a laboratory operated by the European Fire and Security Group (EFSG).

“For a fire-protection type certificate, DNV GL performs an assessment of protection class, analyzing possible fire risks” said Daniel Kopte, an expert on fire systems at DNV GL, speaking to WindPower Monthly. “It will then check the system's integration into the turbine, followed by inspections and function tests. In general, the risk of fire is minimized by good design, and the incorporation of suitable protection systems such as arc detection and suppression.”

Other safety systems can include smoke and temperature sensors and cooling systems. Other measures such as turbine shutdown or reduced operation procedures are also important, alongside triggering and notification when temperatures reach a certain pre-defined limit and remote monitoring and switching.

So, yes, wind turbine fires happen. But probably not as often as the anti-wind farm lobby might like you to think. The industry itself is also very aware of the risks (why wouldn’t they be when they have so much to lose from burning turbines?) and have done and are doing as much as they can to reduce the risk even further.