Wolfgang von Kempelen: The Mind Behind the Mechanical Turk

Wolfgang von Kempelen created two quite debated though ingenious technical sensations from the late 18th century: The mechanical chess player, known as The Automaton or The Turk, and the Speaking Machine.

Wolfgang von Kempelen attended primary school in Preßburg. In 1850, he went to Győr for his secondary education. He had an interest in many things and, after school, he wanted to study physics, mathematics, natural sciences, architecture, literature, or even music. Some historians mention he studied philosophy and law in Vienna University.

Wolfgang von Kempelen was a remarkable polyglot. He was fluent in eight languages: Latin, Hungarian, French, Italian, Slovak, English, Irish (Gaeilge), and Romanian, in addition to his native German.

In 1855, after a trip to Italy visiting Rome and Naples, among other cities, von Kempelen took part in the compilation commission to translate the Codex Theresianus -the Empress Maria Theresa's civil law book- from Latin to German. Soon after that, von Kempelen became the Hungarian court's advisor, and later, in 1857, the secretary.

In 1766, Wolfgang von Kempelen was appointed as the director of the Hungarian salt mines. In 1768, he became settlement commissioner for the Banat region, where the Vienna court carried on an intensive settlement policy to repopulate the provinces at its south east border, to a large extent with Germans. von Kempelen became responsible for the settlement of 37,000 families, organizing of the communities, and designing houses for the settlers.

He introduced a new crop, flax -to produce linen- and also built a silk factory. Wolfgang von Kempelen directed draining the swamps, rebuilding the roads and schools around Timisoara, the main city of Banat.

Three substantial reports to the Vienna court in 1768, 1769, and 1770 reflected that von Kempelen gave account to the repopulating commission, presented a plan for a systematic organization of the Banat, and described the local mines and institutions. Due to all these accomplishments, the Empress Maria Theresia was greatly satisfied. In 1771, she granted 1,000 Gulden for his services and an annuity of the same sum.

In the autumn of 1769, Wolfgang von Kempelen was invited by the Empress to attend magnetic experiments shown in Vienna by the French illusionist François Pelletier. During the demonstration, von Kempelen saw the Empress was impressed by Pelletier.

However, he was not impressed at all. He said to the Empress he could invent a machine far more surprising within half a year. He immediately started to work on the chess playing android, an automaton for the enjoyment of the court.

In 1770, his masterpiece was first demonstrated to the Empress in Vienna. Shortly after this, his machine became world famous and the whole of Europe wanted to see it. Many people were intrigued and strove to figure out the machine's secret.

In 1785, someone guessed there was a man hidden in the cabinet who moved the figures, which was the truth.

In 1770, Wolfgang von Kempelen continued with his engineering work. He designed a pontoon bridge over the river Danube in Preßburg. Later, in 1772, when the castle of Preßburg was rebuilt, Kempelen was asked to construct a separate water supply for the castle.

In the same 1772, Maria Theresia decided, with the help of French gardeners, to turn the Schönbrunn wild park into a beautiful garden. Kempelen received his new assignment: he had to provide for the water supply of the garden's jewel, its fountain and the water cascades.

In October 1772, the fountain with its self-regulating water pump was inaugurated. Later in 1780 Kempelen designed two steam hydraulic machines for the same purpose.

In 1774, von Kempelen helped the Preßburg people once more: He established the first pawn shop of the country, which was a popular alternative to the local usurers.

Also in 1774, Maria Theresia caught smallpox. She insisted on taking care of her governing tasks and asked von Kempelen to design a mobile bed, easy to move from one room to another, in which she could lie, sit, write, and read comfortably.

von Kempelen received another architectural commission, to plan the Sava-Adria Canal, a channel that was planned to connect the Danube with the Adriatic Sea. This work was never realized. Later, von Kempelen took part in the reconstruction of the Buda Castle.

On October 25, 1790, the Buda Castle Theater was finished according to his plans. For the first time in history, Hungarian language could be heard on stage in a Hungarian theater.

In 1769, Wolfgang von Kempelen commenced preliminary work on his mechanical speech machine. In order to counteract some doubts about the credibility of his ingenious apparatus, in 1791, von Kempelen published a detailed description in his chef-d'oeuvre The Mechanism of Human Speech.

The Englishman Wheatstone, the German Posch, and the Austrian mathematician Joseph Faber were amongst the first to utilize von Kempelen's invention.

Outside of the scientific circle, Wolfgang von Kempelen also dealt with arts. He wrote poems, epigrams, dramas, and musical plays for which he composed the scores. He also illustrated his poems. In 1767, his comedy Das Zauberbuch (the Magic Book), von Kempelen's presentation of white and black magic was staged in Preßburg. In 1781, his melodrama Perseus and Andromeda was publicly performed in the National Theater, in Vienna.

In 1798, after 43 years of service, Kempelen was retired with the title of a Knight of the Holy Roman Empire.

Wolfgang von Kempelen's private life was not a happy one. Although he had a very good home life, his work often took top priority and he was badly stricken as fate has decreed it.

On September 6, 1757, in Vienna, Wolfgang Kempelen married to Francziska Piani, lady-in-waiting of Archduchess Maria Carolina Ludovika. Unfortunately, Francziska died two months later of smallpox. Wolfgang disappeared into his workshop for months out of grief, distracting himself by learning woodworking, clockmaking, and dozens of other skills. 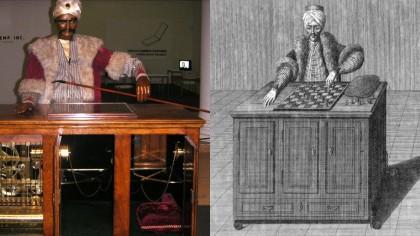 In 1762, Wolfgang von Kempelen married to Anna Maria Gobelius, companion of the wife of count János Erdődy. They had five children born between 1763 to 1771. But only Mária Teréz (born in 1768) and Karl (Károly) (born in  1771) reached adult age. Only Karl survived his father. The first three children—Julianna (born in 1763), Marie-Anna (born in 1764), and Andreas Christian (born in 1766) died shortly after birth.

Before Wolfgang von Kempelen's death on March 26, 1804, perhaps because of his reformist thoughts, Emperor Franz II canceled the annuity. Wolfgang von Kempelen was a remarkable inventor. After a fruitful life abounding in experiences, he died highly esteemed in his in Alservorstadt, near Vienna. He was 70.

The Science Behind the Mysterious Seneca Guns