Self-healing technology might sound like an oxymoron. We often associate healing with organic creatures, and when we hear "self-healing," we might even think of a superpower. But one team of researchers presented a potentially revolutionary substance to the American Chemical Society: a self-healing material for robotics and gadgetry. This stretchy polymeric material would allow electronics and soft robotics systems to repair themselves.

Lead researcher Chao Wang said the inspiration actually did come (in part at least) from the comic book world.

"When I was young, my idol was Wolverine from the X-Men," he said. "He could save the world, but only because he could heal himself. A self-healing material, when carved into two parts, can go back together like nothing has happened, just like our human skin."

Wang has been researching the potential for self-healing lithium ion batteries. In an ideal world, if someone dropped his cell phone, the expensive new smartphone could fix itself. No more stopping by Apple or a cell phone provider's store to purchase a replacement phone, screen, or battery.

However, when the researchers say 'self-healing,' they mean chemical bonding rather than rapid biological regrowth. Wang and his team at the University of California, Riverside took advantage of an ion-dipole interaction. This bond comes from the attractive force between a charged ion and polar molecules. 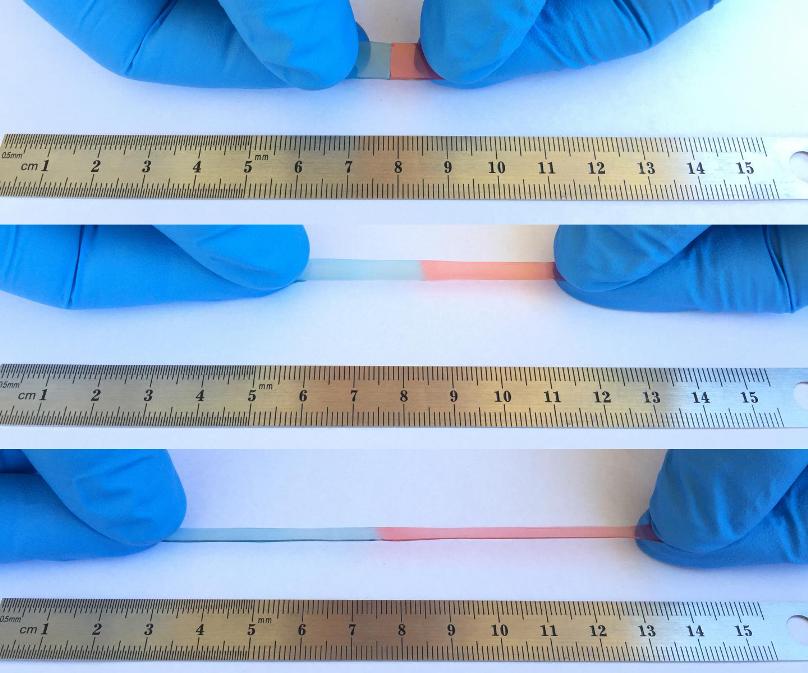 The polymer chains created certainly show superhero strength. The material can stretch up to 50 times is regular size. Researchers ripped the material in two. It only took a day for it to heal itself at room temperature. The team then made an artificial muscle out of the substance. They put a non-conductive material between two layers of the ionic polymer. The material responded to electricity and the muscles twitched. (It should be noted, however, that Wang and his team's polymer isn't intended for medical uses.)

"Previous self-healing polymers haven't worked well in high humidity, Wang said. "Water gets in there and messes things up. It can change the mechanical properties. We are currently tweaking the covalent bonds within the polymer itself to get these materials ready for real-world applications."

So what does this incredible new substance mean for the future? Soft robotics continues to expand as a subset of robotics. As more non-rigid, squishier robots develop, scientists who make them will also have to figure out tools with which to effectively fix these systems. The team notes in its findings that "applications that require high stretchability and that experience significant mechanical wear would strongly benefit from the integration of self-healing capabilities in order to extend lifetime and lower cost of devices."

The researchers presented their findings at this year's National Meeting & Exposition of the American Chemical Society (ACS). The ACS is one of the oldest organizations for chemists and chemistry in the world. This year, there were more than 14,000 presentations on a variety of subjects.

SEE ALSO: Can Sound Waves Be Used to Hack Into Smartphones?