A Dutch woman has been spied on and abused by a person who hacked her webcam. The woman filmed the camera moving on its own and captured the hacker yelling abuse at her.

It had always seemed like an urban tech myth, that hackers could use your webcam to spy on you at home. But this has become a terrifying reality for one Dutch woman who was verbally abused by a hacker communicating with her through her webcam. The woman in question had purchased an off the shelf external webcam and after some time, she noticed that the camera began to move on its own accord. Creeped out, she unplugged the device and put it in a box. But took it back out to show a friend just how weird the possessed machine was.

Soon after setting it up, the camera began moving on its own again, tracking her movements around her flat. A male voice from camera asked if she spoke French. When she replied "No, Englisch!" the hacker then mocked her accent, saying “Hola Senorita”. The distraught woman screamed at the hacker via the webcam to leave her house, before the male voice verbally abused her.

The woman shared a video of the incident on Facebook. She wrote : “I walked into the living room and I saw my camera move. The camera went back and forth. I had no idea what he was doing. Was it updating? All of a sudden, I heard a rumble. The camera turned my way, and I heard, ‘bonjour madame’. I moved to the left and right, and the camera came with me.”

The details of exactly how the hacker gained access to the webcam are unknown. But there are websites that detail how to try and hack low-security cameras for spying. 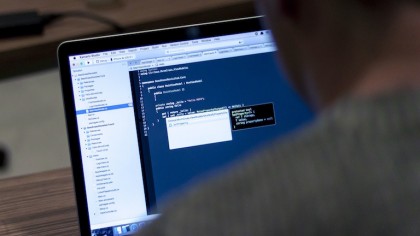 The webcam in question was a Maxxter 3D Webcam sold by Action. The firm has urged its customers with similar models to change their pin codes. Action released a statement about the incident saying:

“In response to messages on Facebook and in the media about the possible hacking of a security camera purchased from Action, we would like to inform you that Action takes the security of its customers and the products we sell extremely seriously. We are in touch with this customer about this incident. In order to investigate the cause and to determine whether it is in camera or something else, the camera concerned is requested so that it can be checked by the supplier thoroughly. Should it prove that the camera does not meet our requirements then it will, of course, be called back and we will inform our customers about this. This camera has been sold at Action since May 2017. Customers who bought this product, we strongly recommend that you change the default ID password and use a strong WiFi password.”

Security related to internet connected devices has been a much-debated subject and this case again brings the topic to the forefront. With more and more devices and objects connected via networks, security must become a top priority. Part of this is educating the consumer about ways to securely protect seemingly ‘safe’ devices. Security experts and manufactureres are urging people to change the default passwords on devices and choose rigorous replacement passwords. While this doesn't guarantee safety it is the first step in minimizing the risk of hacking.