A baby copperhead is disgusting the public and fascinating researchers by having two equally functional heads.

Snakes with one head are terrifying enough for most people, but a snake with two heads? That's the horrific sight one Virginia woman encountered while tending a neighbor's flower bed.

Stephanie Myers discovered the snake and told local media "I wanted to look away but couldn't stop looking at it."

Learning more about the mystery snake

Several wildlife experts took to the internet to help identify the snake. One of those experts was Rich Perry who owns and operates Virginia Wildlife Management and Control in Powhatan, Virginia.

A friend of Perry's sent him a picture of the snake taken by Myers.

"She was afraid it would get away and having kids and pets, they were going to get bit," Perry said.

And, as Perry pointed out, Myers had every right to be concerned about the snake in the grass. It was a baby copperhead.

Venomous copperheads aren't uncommon for most residents in North America, especially for residents in the southeastern United States or in forested, temperate climates. They're the venomous snake most likely to bite when triggered, but their bites are rarely fatal where humans are involved.

Copperheads can be classified as pit vipers alongside the popular rattlesnake and the water moccasin. They're medium-sized snakes, averaging between two and three feet (less than 1 m) in length. They get their name from their reddish heads and are iconic for their patterned bodies.

Copperheads eat mice and other small rodents, as the Virginia Herpetological Society points out. They use their venom to take down these rodes with ease. Unlike rattlesnakes, they give almost no warning signs they're about to strike.

What to do with a two-headed snake

Herpetologists at the Wildlife Center of Virginia are currently caring for the snake.

In a press statement, they noted the baby has quite a unique build -- even for a two-headed snake.

"It appears as though the left head is more dominant – it’s generally more active and responsive to stimulus. Radiographs revealed that the two-headed snake has two tracheas [the left one is more developed], two esophaguses [the right one is more developed], and the two heads share one heart and one set of lungs. Based on the anatomy, it would be better for the right head to eat, but it may be a challenge since the left head appears more dominant." 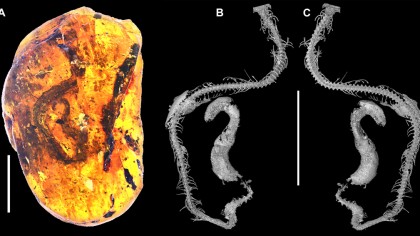 What's next for the snake? Herpetologists are trying to keep the snake alive as long as they can. The Wildlife Center explained in a statement that two-headed snakes are normally only seen in captivity due to breeding practices.

It's so rare, in fact, that the Virginia State herpetologist J.D. Kleopfer told reporters that he'd only ever read of two-headed snakes before and had never seen one alive and in the wild.

"This is a Ringling Brothers and Barnum & Bailey Circus kind of moment," he said.

The rarity was confirmed by experts at the Wildlife Center.

"Wild two-headed snakes are extremely rare – they just don’t live that long. The herpetologist will continue monitoring the snake; if it survives, it will likely be placed in an educational facility," the Wildlife Center explained.

Via: Wildlife Center of Virginia