World Bank President Warns About the Future of Job Automation

World Bank Chief Jim Yong Kim delivered stern words about the unavoidable reality of automated labor in a recent statement, at the same time stressing that the prediction should be viewed as a call to action, not an apocalyptic warning.

In recent years, we have all seen the presence of robots entering the labor force more and more, albeit in more of a supporting position on assembly lines or performing specialized and precise tasks. What’s more, analysts have been giving predictions of the large impact that robot-assisted job automation will have on human labor around the world. Last week, however, the warning came from the World Bank.

As the international finance institution is a virtual treasure trove of data, all of which is meticulously collected and vetted several times over, we can say with confidence that there will be an abundance of figures to support its claims. This is all to say that this important forecast about the future of global labor as we know it should be taken seriously.

9 charts from the 2018 World Development Report on education #WDR18 https://t.co/FIgN2MxU2c via @worldbankdata

The most compelling part of their analysis is that it takes into account rising political, educational and economic aspirations, and the potentially catastrophic consequences it sees as mechanized labor takes a stronger foothold.

More and more companies are accepting the benefits that come with automation as reflected in rising revenues for robots, as the US-based trade association Robotic Industries Association (RIA) reports, explaining that what is behind the trend is “leading automation companies are reaching out to small and medium-sized customers.” However, little raw data has been dedicated to the global impact on civil society by a major global entity.

World Bank Chief Jim Yong Kim said of this possibility: "If your aspirations start to rise but then there's no opportunity it can lead to fragility, conflict, violence," adding the sobering message, "This is the crash course we're going down."

Behind the messages, however, there is a point of optimism: this trend in global labor should also be seen as an incentive, driven by the catalyst of job automation, to reinvest in and reprioritize education efforts for more people. 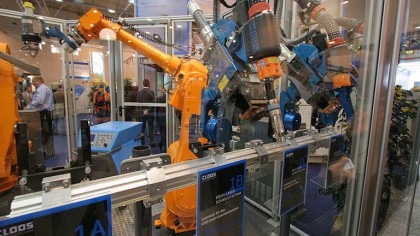 Can Humans and Robots Work Side by Side in Harmony?

"The one thing you know for sure that you'll need in whatever the economy looks like in the future is people who can learn," Kim shared, stressing again that now is the time to make this fundamental change, "We want to create a sense of urgency to invest in people that we think is necessary given the way ... the global economy is changing."

The progression, therefore, will be towards a greater demand for skilled work and a decline in security for workers in unskilled jobs. The World Bank will be stepping up its efforts: Kim announced last week the creation of The Human Capital Project in response, with the idea that “Aspirations, linked to opportunity, can breed dynamism and inclusive, sustainable economic growth.”

By encouraging countries to #investinpeople, our Human Capital Project will harness the most powerful driver of economic growth. @Columbia pic.twitter.com/AIfdUDa3YO

All of this assumes, of course, a certain level of political, trade and financial stability in partnering countries, a reality the World Bank, and the equally invested International Monetary Fund (IMF), will have to take into account.

The message from the World Bank is clear: the challenge has been set for all of us to get with the times, workwise, or be left behind. The old order of work and resource allocation is on the way out. Perhaps the ‘crash’ Kim is referring to is really about old concepts and new reality.

Underwater Welding: One of the Most Dangerous Jobs on Earth