Qatar announced that it would be using shipping container-based architecture to build its stadium for the 2022 FIFA World Cup.

Built with the notion of sustainable construction in mind, Qatar officials are partnering with architects Fenwick Iribarren, Schlaich Bergermann Partner and Hilson Moran on the Ras Abu Aboud Stadium. The building could even earn a four-star rating from the Global Sustainability Assessment System (GSAS) certification.

According to FIFA, sustainability is the new focus with all potential World Cup locations in Qatar, and the GSAS certification has particular prominence for any design.

"GSAS is the most far-reaching green building certification," said Frederico Addiechi, FIFA Head of Sustainability and Diversity. "In addition to design and build, it also measures operations. This has actually informed the 2026 FIFA World Cup bidding process. Bidders are now required to adhere to all three steps regarding new developments, while existing buildings should be operated according to agreed sustainability guidelines."

"Innovation has always been central to our plans for delivering a historic FIFA World Cup that leaves a legacy for Qatar and the world, and there is no better example of this than the design of Ras Abu Aboud Stadium,"This venue offers the perfect legacy, capable of being reassembled in a new location in its entirety or built into numerous small sports and cultural venues," said H.E. Hassan Al Thawadi, Secretary General of the Supreme Committee for Delivery & Legacy for the World Cup. "All of this in a stadium that delivers the atmosphere fans expect at a World Cup and which we will build in a more sustainable way than ever before."

Within the last several years, major international sporting events such as the Olympics and the World Cup have left host countries spending billions of dollars on creating massive structures to hold spectators and house competitors. And then, once the event is over, those buildings no longer serve a purpose. Non-reusable structures have become one of the biggest critiques of international sporting events in recent years.

Qatar officials also hope that by hosting the event, the country can help reshape misunderstandings about the Middle East on a global scale.

"We have a difficult task ahead, but we are not acting alone," said Al Thawadi. "Our stakeholders are working diligently, and we are focused on building support in Qatar and across the Middle East. We will use this opportunity to transform perceptions of our region and bridge cultural divides."

The stadium is expected to be complete by 2020 and will be located near a Doha port on a 450,000 square meter waterfront, as seen in the photo above.

Modular units are becoming more popular as architects look for sustainable ways to add multipurpose functions to their designs. 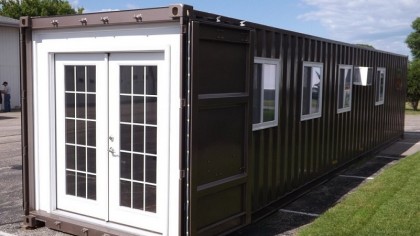 You Can Now Order a Shipping Container House on Amazon

By using shipping containers and adjusting traditional building methods, Qatar could save itself from a fate similar to places like Rio de Janiero and Shanghai.

Brazil spent over $3 billion preparing stadiums for the 2014 FIFA World Cup, only to be followed shortly after by the 2016 Olympics. One arena, the Arena Amazonia in the jungle town of Manaus, cost a reported $300 million to build. That didn't include flying teams to and from the area, as the city of Rio had little space for more stadiums as is.

At $550 million, the Estadio Nacional in Brasilia was the most expensive to build. It hosted seven World Cup games and is now being used as a bus parking lot, according to a Reuters report.