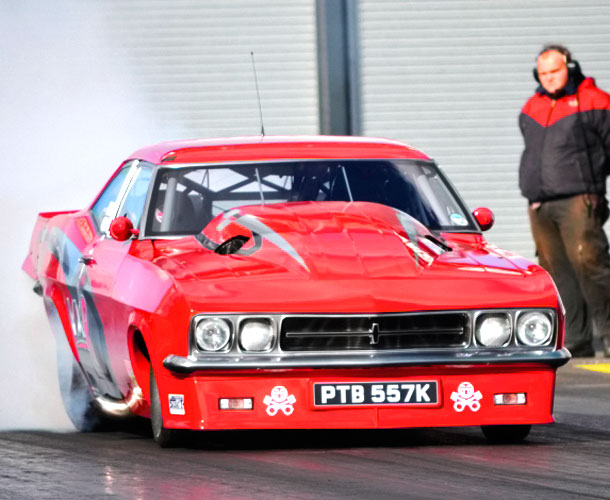 The history of the Vauxhall Victor began back in 1957 when General Motors first unveiled it to the British market. It was a large family car with 55 HP and it is obvious that this car was very far away from the high performance dragsters.

A large family car is not the perfect drag racer, so huge modifications are needed. Initially, the team modified the size of the car because the team needed a sporty coupe. As a result, the wheelbase was stretched 14", the roof was chopped 2", the front screen was inclined back 5 degrees, the front door lengthened by 6", the rear door was shortened 6", the rear quarters raised 4", and the front was tapered by 1.5". The car needed also a new chassis, made by Webster Race Engineering who designed the chrome SFI spec 25.2 twin rail. They designed also and the rear aluminum spoiler.

The standard fourth generation 1967 Victor FD was offered with an ordinary 88 HP 2-liter 4-cylinder engine. This was good enough for the time, but not a very inspiring power source in this day and age, especially for a drag racer. So, the standard four-cylinder was tossed out and an 8.8-liter twin-turbo GM V8 engine was put in its place. The Red Victor 3 is a result of the cooperation between VXR and the Red Victor team. It is really impressive transformation from the standard 88 HP to the massive 3000 HP it currently produces after all works.

To sustain the 3000 horses under the hood, the Red Victor 3 received chrome trim around the windows, front and rear bumpers, and on the grille, while the entire body was modified to get better aerodynamics. The bonnet was completely redesigned and combined with carbon fiber doors, bonnet, wheel tubs, boot, front spoiler, transmission tunnel and turbo air intakes.

World's Fastest Three-Wheeled Electric Vehicle Is in the Works