Researchers heat up water to temperatures hotter than the core of the Earth in a fraction of a second with the world’s fastest water heater.

Scientists recently developed the world’s fastest water heater with enough power to heat water from room temperature to 100,000 degrees Celsius in less than a tenth of a picosecond, or millionth of a millionth of a second.

In a new study Ultrafast non-thermal heating of water initiated by an X-ray Free-Electron Laser, researchers blasted water molecules with powerful X-ray beams to produce an exotic state of water - one which scientists want to know more about. Their research, conducted at the Department of Energy’s SLAC National Accelerator Laboratory, is helping scientists better understand the peculiar characteristics observed with water at temperatures well beyond its plasma point.

Stoves and ovens are of the more traditional heating methods typically used. For thousands of years, people have been heating objects by simply transferring the heat of one object to another. Today, microwaving has modernized the process with a particularly interesting technique - radiation - specifically, microwave radiation. 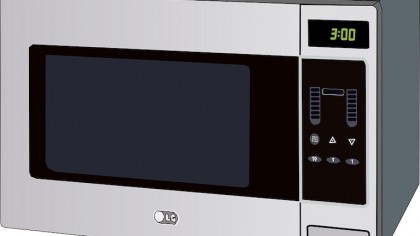 Microwaves are a form of electromagnetic radiation commonly used in radio, television, and cellular devices amongst many others. Despite the alarming name, microwaves are non-ionizing, meaning they are not capable of stripping atoms of their electrons.

Inside a microwave oven, the waves operate at a frequency which is readily absorbed by water molecules. Individual molecules absorb the waves, causing them to vibrate. The energy they gain is then absorbed through the molecules surrounding the target vibrating molecule. The energy is then distributed throughout the object, causing its overall temperature to rise.

The system does, however, rely on a mechanism which at first resembles that of a traditional microwave. Initially, electromagnetic waves (X-rays in this case) are shot towards a body of water which readily absorb the energy.

“It is certainly not the usual way to boil your water,” said lead researcher Caleman from the Center for Free-Electron Laser Science (CFEL) at DESY and Uppsala University (Sweden). “Normally, when you heat water, the molecules will just be shaken stronger and stronger.”

Not an Ordinary System

What makes the new technique different is in how the water continues to heat. As the temperature quickly rises, the electrons in the molecules become too excited for the nucleus to hold on. At a certain point, the electrons are released from the atom leaving the pair of hydrogen and single oxygen particles behind as positive charges.

The process is repeated randomly throughout the water body causing a rapid buildup of positive charge. The positive charges within the superheated water violently repel one another, forcing each other in opposite directions. The result is a massive release of energy in the form of heat.

“Our heating is fundamentally different”, confirmed Caleman. “The energetic X-rays punch electrons out of the water molecules, thereby destroying the balance of electric charges. So, suddenly the atoms feel a strong repulsive force and start to move violently.”

In less than 75 millionths of a billionth of a second or 0.000 000 000 000 075 seconds, the water changes phase from liquid to plasma. However, the change is so rapid that the water does not have a chance to boil off into a steam first as in with traditional boiling techniques.

“While the water transforms from liquid to plasma, it still remains at the density of liquid water, as the atoms didn't have time to move significantly yet,” said co-author Olof Jönsson from Uppsala University. “It has similar characteristics as some plasmas in the sun and the gas giant Jupiter, but has a lower density. Meanwhile, it is hotter than Earth's core.”

The Importance of Keeping the Heat On

Through their research, scientists hope to gain a more thorough understanding of how water interacts with the world around it. Although it is a particularly niche area of study, it is based upon a substance in which we cannot exist without.

“Water really is an odd liquid, and if it weren't for its peculiar characteristics, many things on Earth wouldn't be as they are, particularly life.”

“The study gives us a better understanding of what we do to different samples,” explained co-author Nicusor Timneanu from Uppsala University. “Its observations are also important to consider for the development of techniques to image single molecules or other tiny particles with X-ray lasers.”

Although it is common, water is essential for life. Any knowledge of such vital sustenance could one day prove to be invaluable.

“Water really is an odd liquid, and if it weren't for its peculiar characteristics, many things on Earth wouldn't be as they are, particularly life”, Jönsson emphasised.