The approach, that so far had only been done on insects, has finally successfully been achieved in mice test subjects.

CRISPR/Cas9 is a form of genetic editing that holds a lot of promise, such as the killing of cancer cells, but also comes with some hefty warnings, such as that it may cause DNA damage. So far, scientists have been using CRISPR/Cas9 in a variety of plants and animals to edit genetic information, including attempts to practice what is called 'active genetics'.

This last approach is an attempt to edit the genome that controls which of the two copies of a gene is passed to the next generation. But the technique is complicated and rife with obstacles so thus far been used only on insects. Not anymore!

A team of biologists has now achieved the world's first CRISPR/Cas9-based approach to control genetic inheritance in a mammal. 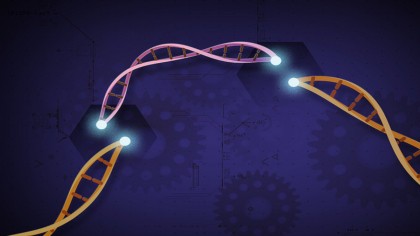 "Our motivation was to develop this as a tool for laboratory researchers to control the inheritance of multiple genes in mice," said project lead Assistant Professor at University of California San Diego Kimberly Cooper. "With further development we think it will be possible to make animal models of complex human genetic diseases, like arthritis and cancer, that are not currently possible."

To achieve their lofty goals, the researchers engineered an active genetic "CopyCat" DNA element into the gene responsible for fur color in mice and successfully succeeded in controlling mice fur color, making it white instead of black. Then, over a two-year period, they expanded their work to successfully determine that the CopyCat element could be copied from one chromosome to the other in order to repair a break in the DNA targeted by CRISPR/Cas9.

As a result, they found that as much as 86 percent of the mice offspring inherited the CopyCat element from the female parent. This was a great improvement on the usual 50 percent naturally achieved.

According to UC San Diego Professor Ethan Bier, a study coauthor, the results, "open the way for various applications in synthetic biology including the modular assembly of complex genetic systems for studying diverse biological processes."

Cooper and her team are trying to build on this first mammalian active genetic success further by extending it to multiple genes instead of the single gene alteration possible now.

"We've shown that we can convert one genotype from heterozygous to homozygous. Now we want to see if we can efficiently control the inheritance of three genes in an animal. If this can be implemented for multiple genes at once, it could revolutionize mouse genetics," said Cooper.

The work could lead to a significant decrease in the time and cost needed to advance biomedical research on human diseases. But for Cooper and her team, it goes beyond that. Her research is also a way of exploring evolution itself.

"We are also interested in understanding the mechanisms of evolution," said Cooper. "For certain traits that have evolved over tens of millions of years, the number of genetic changes is greater than we can currently assemble in mice to understand what caused bat fingers to grow into a wing, for example. So we want to make lots of these active genetic tools to understand the origins of mammalian diversity."

Russia Starts Casting for Its First Movie in Space Before US