The creation of the world’s first molecular robot by a team of University of Manchester scientists represents an important step in nanotechnology, and already is being greeted with great anticipation in the scientific community due to its wide-scale implications.

A team of scientists at the University of Manchester have developed a ‘molecular robot’, the first in the world, representing another important breakthrough in the field of Artificial Intelligence-supported nanotechnology.

The robot's main task is to carry out a set of molecule-building commands, and it is even capable of manipulating as little as one molecule of particle. The robots—composed of a mixture of only 150 nitrogen, oxygen, carbon and hydrogen atoms—essentially work in an assembly-style means of production, performing chemical reactions under very controlled and specific guidance from scientists.

The unfathomably tiny size of the robots never ceases to fascinate: it becomes difficult for one to comprehend the size of the small taskmasters, which even in the billions would not be the size of even the smallest particle visible to the human eye like a grain of sand or salt. The tiny arms moving about in perfect harmony is a staggering thought.

University of Manchester Chemistry Professor David Leigh, who is also a part of the research team, elaborates on the enormous range of important tasks the robots perform using chemical inputs:

“It is similar to the way robots are used on a car assembly line. Those robots pick up a panel and position it so that it can be riveted in the correct way to build the bodywork of a car. So, just like the robot in the factory, our molecular version can be programmed to position and rivet components in different ways to build different products, just on a much smaller scale at a molecular level.” Replicating the work in synthetic systems is the next step for the scientists.

“It is the same sort of process scientists use to make medicines and plastics from simple chemical building blocks...Our robot is literally a molecular robot constructed of atoms just like you can build a very simple robot out of Lego bricks.” There are crucial implications in medicine, materials and energy. The robots impact the speed of drug discovery and even reduce materials demands, among a list of other valuable benefits.

Highly-regarded University of Edinburgh Chemist and Chemistry Professor Sir Fraser Stoddart assessed the effort involved in the new field: "This doesn't happen overnight; it takes a very long time and hundreds of very talented postdocs." For the handling of fragile or sensitive materials, these robots are indispensable. 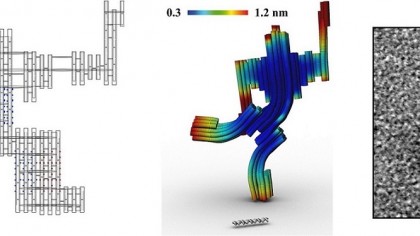 American Chemical Society (ACS) President and chemistry professor Donna Nelson adds, “[Curiosity about this area of research] will make the area blossom; more scientists will move into the area and it will attract more funding. You can expect the applications to appear much more rapidly now.” For this reason, we all support the valuable contributions made by scientists and researchers in each study and each publication, knowing that each new discovery brings us one step closer.