The future is officially here. ThyssenKrupp will install the world's first rope-free multi-directional elevator in a project in Berlin, Germany this year.

As you know, elevators work by moving a cabin up and down in a strictly vertical sense, using cables. The Multi, on the other hand, imagines the elevator more like a metro system. The cabins travel up and down as well as sideways. Each system incorporates multiple cabins that are powered individually by linear induction motors. If we didn't make that clear, this elevator can move sideways!

The cabins work on a set track much like a subway system, and while the cabins themselves are smaller and slower than a traditional lift system, the ability for multiple cabins mean really short wait times. In a video released by the company, you can see a scaled model of the multi-directional elevator working with cabins moving around on a track. When it wants to move horizontally a section of track rotates and the cab goes sideways.

Bam! Mind blown! The Multi uses magnetic levitation technology. Known as maglev, it is close to what is used in some rail systems and lets the cabins ‘float’ on the rail rather than roll.

The Multi has the possibility to reduce buildings' footprint

“Buildings are becoming like vertical cities, and they need a flexible transport system similar to a metro; speed along does not solve the challenges posed by tall buildings,” Markus Jetter, head of research for the company, states on ThyssenKrupp’s website.

Not only is this multi-directional elevator very cool, it is also good for the environment. The Multi will reduce energy costs to buildings by incorporating a system that reduces peak power demand by up to 60% giving buildings the opportunity to reduce emissions. 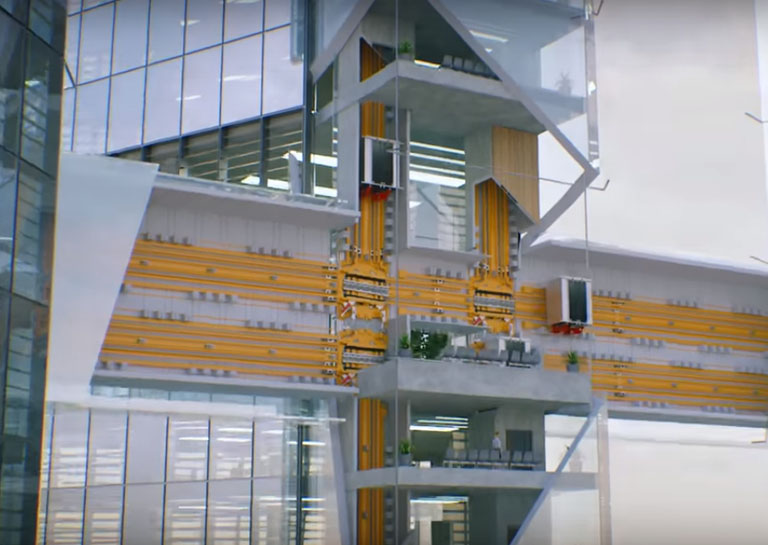 The cable elevators that we are familiar with today were invented in 1854 opening the possibility for taller skyscrapers. The Multi will do the same for contemporary architecture. Antony Wood, executive director of the Council on Tall Buildings and Urban Habitat, said in a statement. “This has the capacity to transform the industry at large, changing the way tall buildings are designed, and allowing for much more efficient core designs, as well as better connectivity in buildings.”

First system to be installed in Berlin

The company hinted at the Multi system back in 2014 and finally revealed the full design earlier this week. The first full version of the multi-directional elevator will be installed in OVG Real Estate’s new East Side Tower Building office tower in Berlin.

“East Side Tower” will be a leading environmental and innovative building. Standing at 140 meters tall the building will be a dedicated office high-rise with an expected completion in 2020.