Final preparations before the opening of the world's first underground hotel in the Shanghai-region Songjiang are underway.

Thanks to the unprecedented travel opportunities that have become available in this century, customer tastes--and expectations--have undergone a dramatic shift.

We are entering into an era in which hotel owners and architects around the world are understanding the importance of enhancing the guest experience in dynamic and exciting ways, with offerings that include everything from reworked bus interiors to more sustainable options like the 'energy positive' hotel in Norway.

Along with this line of thinking, the Intercontinental Shanghai Wonderland was conceived. Designed and executed in a truly dramatic style, the 5-star hotel is almost completely underground.

To achieve this objective, the team behind the hotel created a plan that placed it inside a former rock quarry measuring 90m deep which is in the part of the Sheshan Mountain Range in central China.

The British engineering, design and project management group behind the project, Atkins Global, has been putting the finishing touches on the project. The hotel is on target to open next month.

For travelers who make Shanghai one of the destinations on their itinerary, the hotel is located only 30 kilometers from the local Hongqiao Airport in Songjiang.

To give an idea of the dramatic layout of the space:

--> Beyond the top two floors near the ground level--which is covered in lush, green grass, the remaining 16 floors are underground.

--> The green covering above the top floor not only allow the hotel to fit seamlessly into its surroundings, but it symbolically echoes the solar and geothermal energy resources which will be utilized in various ways in the hotel.

--> An aquarium 10 meters deep surrounds two of the underground floors.

Spectacular views from almost every angle

In order to maximize the effect offered by the quarry, the design concept, which includes a cascading waterfall that starts at the top of the quarry, will be enhanced with curved balconies which are a part of each of the rooms. And if that is not enough, bungee jumping and rock climbing activities will also offer a chance to connect with the surrounding nature. 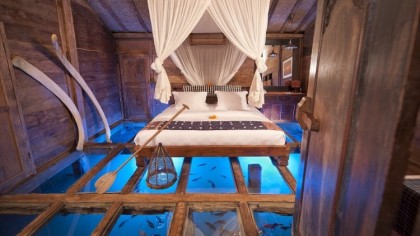 Sleep on a River in This Unique Hotel Room in Bali

"By building the hotel where it is, designers and developers hope to prevent further damage to the ecological environment around it. The Songjiang Quarry Hotel may become just about the greenest hotel ever made," Atkins Global shared in a statement.

By all indications, the hotel will embrace a vision that achieves the rare combination of maintaining luxury standard (which ultimately will affect the profit margin of any hotel in the industry in a more favorable way) while offering a blueprint of sustainability.