AP Moller Maersk, the world’s biggest container shipping company, recently pledged to get its carbon emissions down to zero by 2050.

The Danish shipping group controls one in five containers on the ocean, but it’s prepared to completely rebuild those ships by 2030 to meet its new goals.

The public shift challenges one of the most energy-consuming industries on the planet.

This is not just another cost-cutting exercise. It’s far from that. It’s an existential exercise, where we as a company need to set ourselves apart.”

Turning the tide of fuel issues

Maersk’s decision to pursue green ships could drastically affect not only its competitors but also consumers. Roughly 90 percent of consumer goods travel on these ships at some point throughout its journey.

These ships churn through massive amounts of fossil fuel, including “bunker fuel” -- the remnants of petroleum during the refining process.

This reliance on ultra-cheap fuels keep costs of goods down while making container ships the dirtiest craft in history. 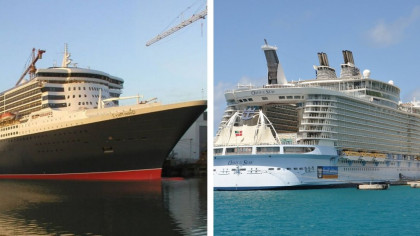 The International Maritime Organization (the organization responsible for regulating container ships) reported that carbon emissions from increased shipping could grow by 250 percent by 2050.

By that time, the industry would create 17 percent of the world’s emissions, significantly higher than its current 3 percent.

Expecting such rapid growth led Maersk’s leadership to establish the next 5 to 10 years as the critical research and development time for their new ship.

While lithium-ion batteries for ships are in development from other companies, those won’t cover the thousands of miles of distance traveled by Maersk’s ships.

“It’s vital that we find solutions for this problem,” Toft noted. “We want many future generations to have a healthy and peaceful existence on this earth.”

To date, Maersk has spent over $1 billion in four years to create more energy efficient technology.

However, the company said it needs “all possible parties” involved to start tackling the issue of cargo ships’ carbon emissions.

Maersk might be the biggest company to pledge support for reducing emissions, but they’re far from the only ones.

Smaller organizations like the Smart Green Shipping Alliance and the Carbon War Room have been campaigning for reducing emissions by at least half for several years now.

“This needs to reduce rapidly if we are to avoid the risks of dangerous climate change -- at least halving in magnitude between now and 2050.”