Formerly known as the Luva gas field during its discovery in 1997, the offshore gas field was renamed in March 2012 after Aasta Hansteen, a women's rights campaigner in Norway. It is situated 300 km offshore in the Vøring area at a depth of 1,300 meters. Situated in such a far location, recovering the resources in the gas field is predicted to be demanding and exhausting as the nearest established infrastructure is hundreds of miles away. Plus the water is significantly deep with harsh and challenging weather conditions.

The estimated recoverable volume of gas in the field is 47 billion standard cubic meters and that is including the Haklang and Snefrid Sør and is collectively known as the Aasta Hansteen. Naturally cooperating with the current sustainable goal of Statoil, the available gas in the field is dry and has a low carbon dioxide content. Moreover, Statoil estimates that the Snefrid Nord has a recoverable oil volume in the range of 31-57 million barrels.

In December 2012, Statoil's plan for development and operations (PDO) was submitted to the Ministry of Petroleum and Energy and approved in 2013. The PDO includes a spar platform which is the first gas infrastructure installation of its kind on the Norwegian continental shelf. The entire platform will weigh at a whopping 70,000 ton and is the world's largest spar structure. Just the substructure, pictured below, weighs at 46,000 ton and measures 200 x 50 meters in diameter.

The substructure and topsides of the platform were constructed by the Hyundai Heavy Industries (HHI) in South Korea. HHI describes the spar platform as 'a cylindrical, partially submerged offshore drilling and production platform that is engineered for deepwater operations'. 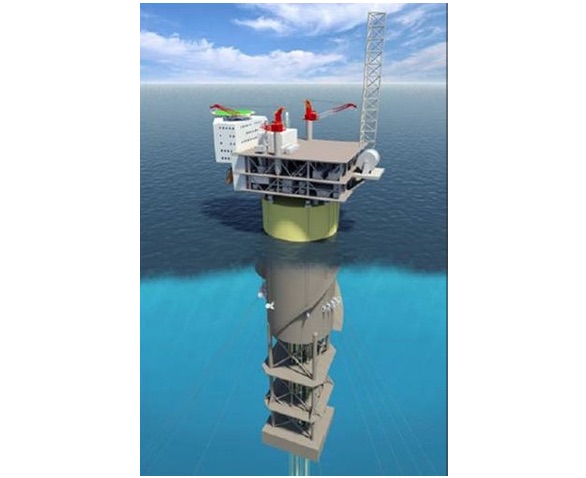 Statoil has declared that the substructure will not be lifted but floated by the Boskalis' heavy transport vessel called Dockwise Vanguard and then transported to Norway with a total journey of 14,500 nautical miles. The whole transportation will take about two months and the topsides will follow a few months later.

Once in Norway, the substructure and the 25,000-ton topsides will be connected to each other to complete the spar structure. The whole platform will then be towed to the Norwegian Sea and moored 1,300 meters deep in the Aasta Hansteen field. The spar platform is Norway's first use of steel catenary risers (SCRs), the first mechanically lined pipe installed using reel-lay in the Scandanavian country, and also the first to use synthetic rope mooring spread offshore. The substructure is equipped with storage for condensate and will be loaded onto shuttle tankers at the field.

The original plan was to start production in the field by the third quarter of 2017 but was postponed in October 2015 because of the platform's construction delays. Now, the new scheduled gas production will begin in 2018.

SEE ALSO: Check out These Gigantic Oil Platforms of the Seas