3D printing has been around since the 1980s, but to the average Joe, it’s really begun to matter only in the last few years. People around the world have been widening the scope of its applications. From food, to prosthetics, to actual human organs, and much more—the technology is indeed revolutionizing not only manufacturing but life. Numerous researchers and companies around the world are also trying to innovate in this space by developing affordable and compact printers for consumer use.

While 3D printing as a manufacturing technique is colonizing our whole world, some of its most interesting advances are happening in the domain of construction. This is in huge part because of the fact that the traditional construction industry is not very nimble, and tends to have high associated costs and labor requirements. And if you come to think of it, there hasn't been any major innovation in traditional construction since the industrial age began. What we have seen are only incremental improvements, which have added up significantly, yet we haven't exactly hit a breakthrough.

The website of the company behind this project, DUS Architects, based out of Amsterdam, describes the Urban Cabin as:

The 3D Printed Urban Cabin rethinks intimacy and individual space within the city. A precise insertion changed the former industrial area from a vast empty non-place into a retreat to escape the speed of everyday life and to enjoy summer, the waterfront and the sunset with friends or by yourself. 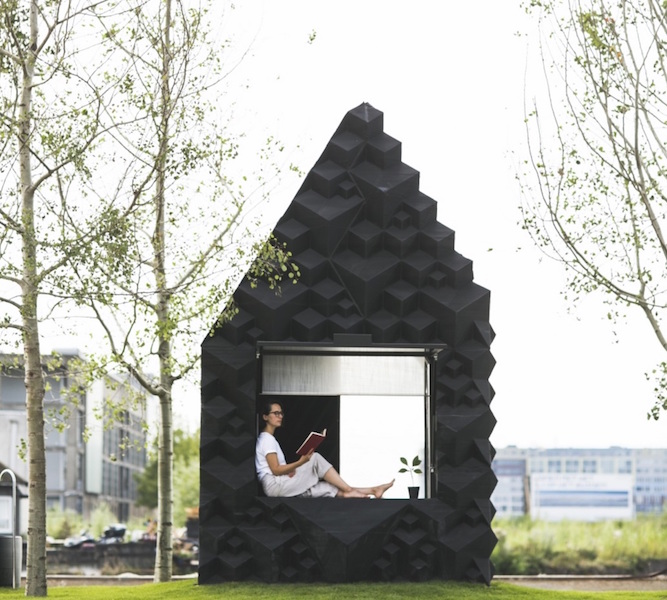 DUS, the international company, is known for its unique architecture using technological innovation, and projects that can create a positive impact on the planet. Their design attempts to create sustainable luxury that dilutes the border between the indoors and the outdoors. It even comes with an outdoor bathtub, and is meant as a retreat or getaway rather than a full-time living space.

The construction of this cozy single story 38 square meter (409 square feet) home took place at San Francisco-based company Apis Cor’s test facility in Stupino, Moscow. Printing of self-bearing walls, partitions, and building envelope was done in less than 24 hours. After completing the wall structures, the printer was removed from the building with a crane-manipulator. Apis Cor is the first company to develop a mobile construction 3D printer enabling complete on-site manufacturing of 3D-printed buildings. Such blazing fast timelines for construction can also come in very handy in situations where a natural calamity or political irregularity forces people to be uprooted from their homes. 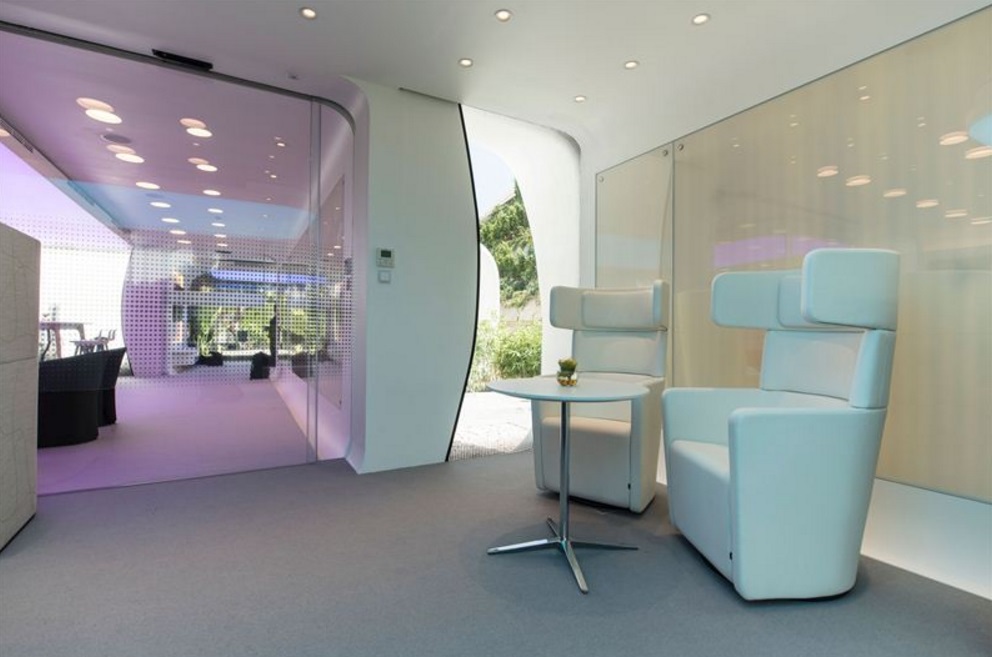 This innovative and new-age office was constructed just about a year ago, using a mixture of cement and a set of building material designed and made in the UAE and the United States. The office building is a part of the Dubai 3D Printing Strategy, which aims to exploit technology for the service of humanity and promote the status of the UAE and Dubai as a leading hub of 3D printing technology by the year 2030. The building on the Emirates Towers premises was opened just about a year ago, and currently houses the temporary office of the Dubai Future Foundation.

Spanning over 8.08 meters (26.5 feet) in length and 2.88 meters (9.4 feet) in height, this temporary structure was an amalgamation of numerous 3D-printed modules held together, and holds the Guinness World Record for being the "World’s largest 3D Printed Architectural Pavilion". This entity was conceptualized and realized by architects Yu Lei and Xu Feng from Laboratory for Creative Design (LCD), Beijing. It was unveiled at the 2015 Beijing Design Week. The intent was not just to create such a structure but also push and challenge the limits of architecture.

3D-Printed Concrete Castle: Because Why Not 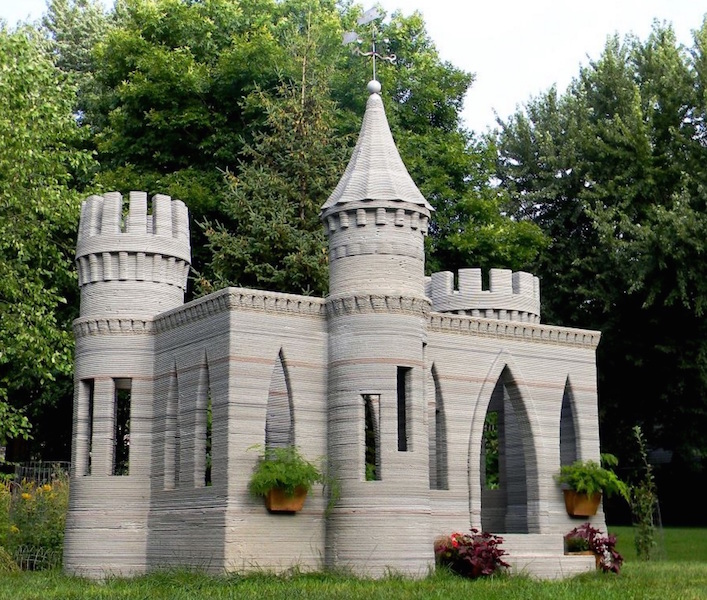 This one is a true marvel, not only because it is a castle, but also because at the time of building this backyard project in 2014, 3D printers that could work with concrete were not commercially available. Which didn't throw contractor Andrey Rudenko off; instead he developed a customized 3D printer to extrude concrete and build the structure from scratch, right in his own backyard.

Andrey is also involved in more "serious" projects in the realm of 3D-printed buildings, one of the more famous ones being the Lewis Grand 3D printed hotel in the Philippines. Check out some of the details of his work in this article.

Gulliver's Gate: Did Somebody Say Fantasy? 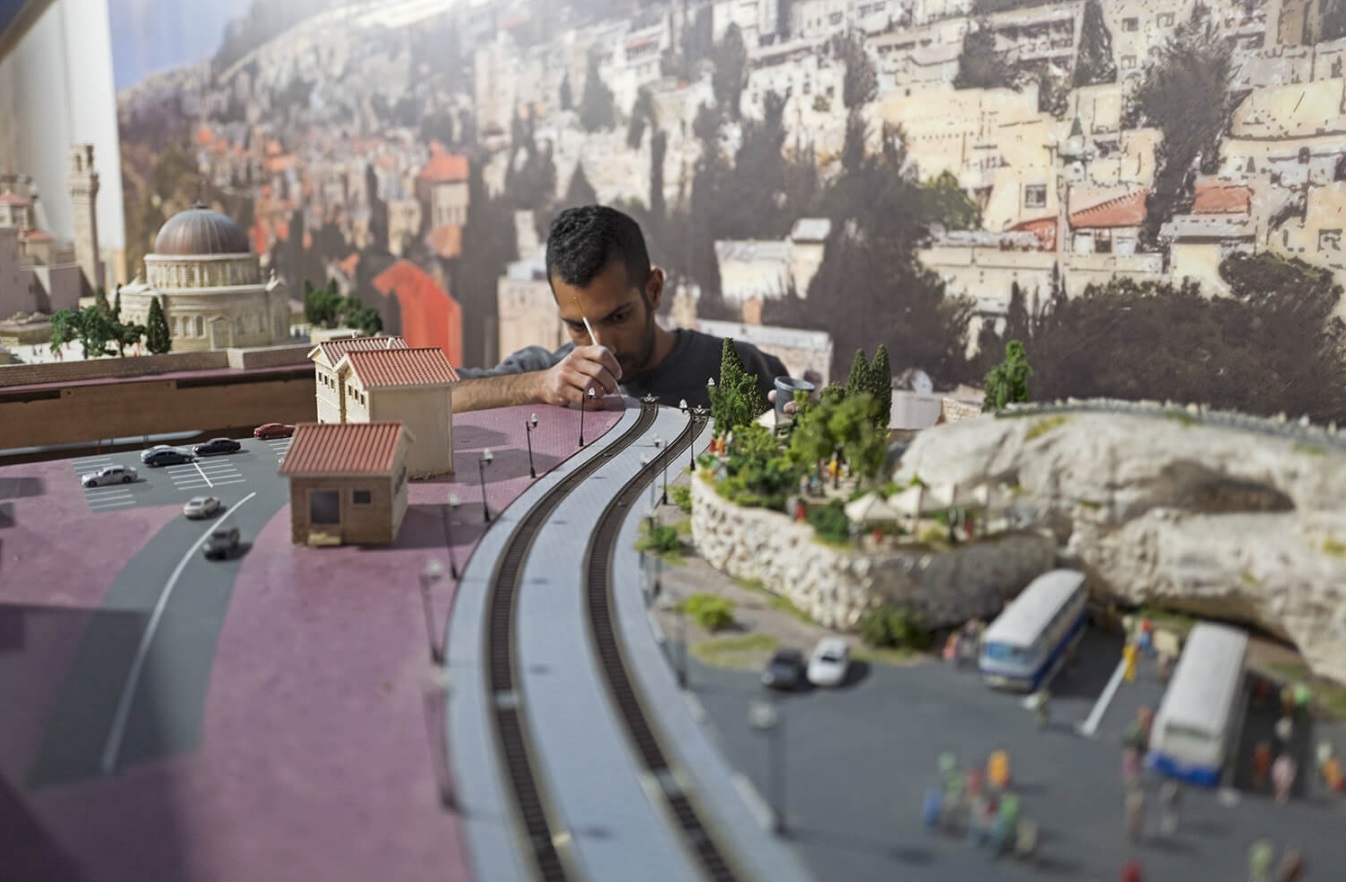 While this one is only partially 3D-printed, it definitely deserves a place on this list, for being a technologically advanced and immersive miniature world, which is as wide as a city block. This Times Square exhibit includes miniatures of well-known landmarks from around the world, connected by appropriate manners of transportation. The exhibits in 1:87 scale, rather than being static, are packed with action, such as an airport which has planes taking off and landing. There will be several moving trains and cars, and even a model of the International Space Station hovering above. They are also offering early supporters and visitors to have their whole bodies scanned and be recreated as figures in the display.

PassivDom: 21st Century Version of Cabin in the Woods

This one is a unique personalized getaway, an off-grid 3D-printed house, which is fully mobile and autonomous, and is controlled by your smartphone, yet comes with five-star features and comfort. As per the website, the house is "100% energy self-sufficient, it heats and conditions air and has a water storage system." This allows for, "freedom from electricity transmission lines, gas pipelines and plumbing". The Ukranian startup even promises 1-day delivery for buyers!

Projects Coming Up: Visions for the Future

Dubai-based construction firm Cazza Technologies recently announced that they will be bringing the world’s first 3D-printed skyscraper to Dubai, without disclosing specifics such as the height of the proposed building or when it’ll be ready.

“Through our technologies, we will be able to build architecturally complex buildings at never-before seen speeds,” says Mr. Kelsey of Cazza Technologies. “It is all about economies of scale where the initial high technology costs will reduce as we enter the mass-production phase.”

“The crane printing system can be easily adopted with existing cranes which means we don’t have to build cranes from scratch,” said Fernando De Los Rios, Cazza’s chief operating officer. “We are adding new features to make it adaptable to high wind speeds along with the use of our layer smoothing system that creates completely flat surfaces. You won’t know it’s 3D printed.”

Landscape House: No Beginning, No End 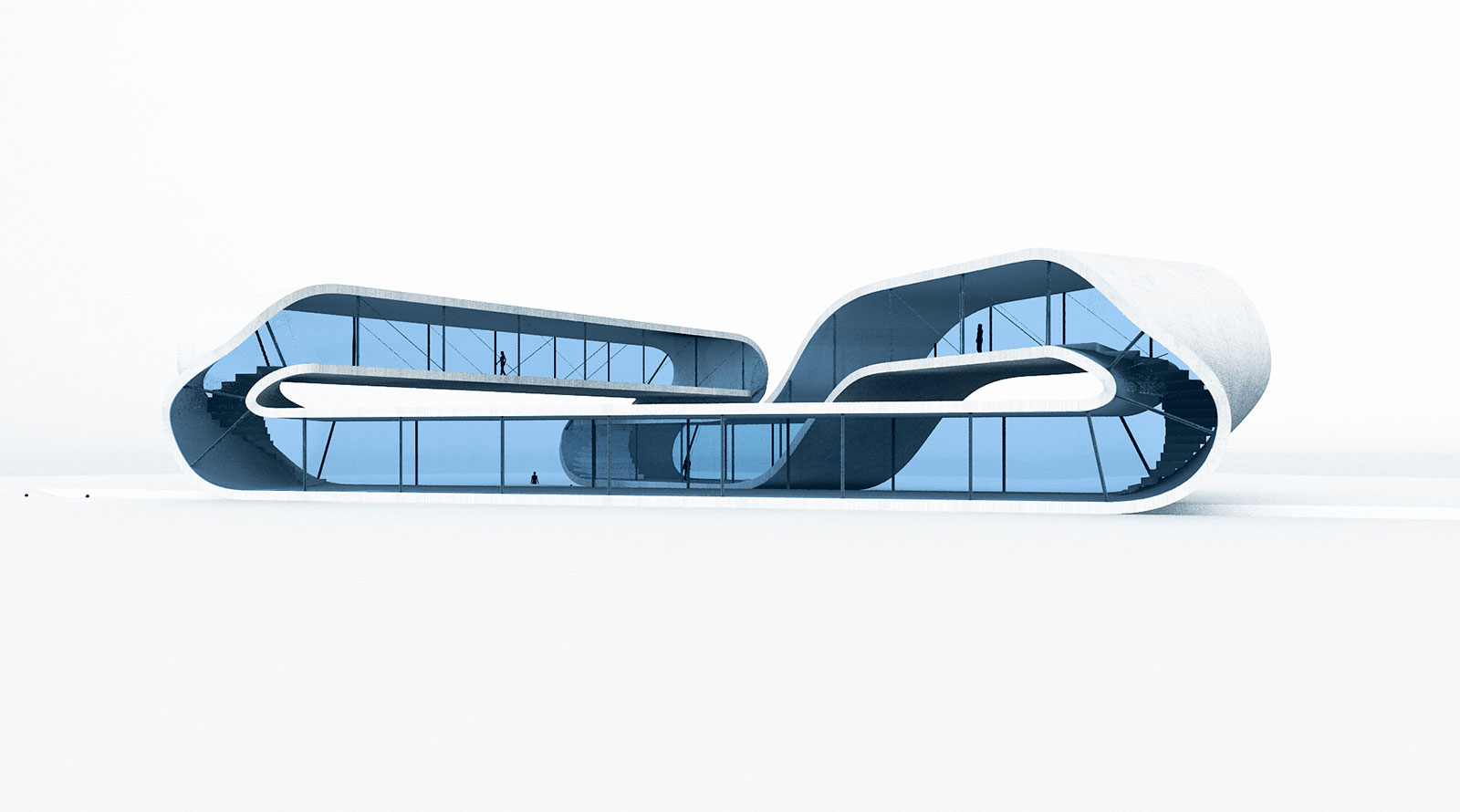 Why did the chicken cross the Möbius Strip?

To get to the same side.

This mystifying building of the Landscape House by Universe Architecture (also Amsterdam-based) was originally not even planned as a 3D-printed one, but the complexity of the building's structure left almost no other option. In this house, which is inspired from the bizarre shape of a Möbius strip, the floor seamlessly becomes the ceiling, the inside becomes the outside. With 3D printing, which is additive, an endless Möbius strip can be manufactured without a cut. 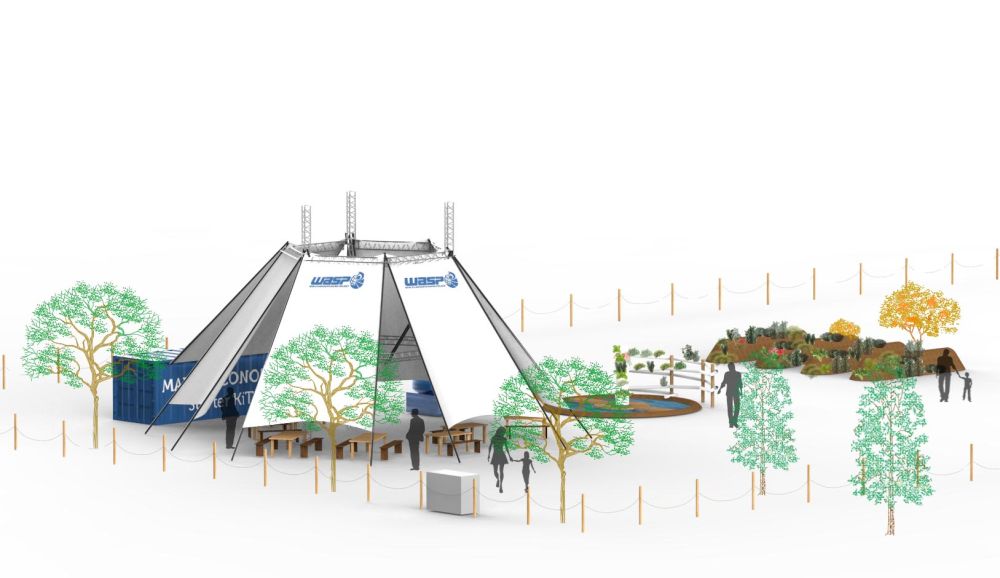 Italian 3D printing company WASP has installed its BigDelta 3D printer in the municipality of Massa Lombarda, and is working to construct the Shamballa Technological Park, a whole village of 3D-printed buildings, using a combination of soil and straw. The highlight of this project is the low energy consumption and low cost of construction. The village will also feature a laboratory equipped with desktop 3D printers to create furniture, ceramics, and biomedical solutions, which will enable it to be largely self-sufficient. Hence, the progress of this village might hold the keys to several innovations in the usage of sustainable, low-cost materials in the space of 3D-printed buildings.

Co2 to Concrete: Killing Two Birds with One Stone

While this one is not by itself a building or structure, it could be a game-changer in construction. A cross-functional research team at the University of California at Los Angeles is working on a unique solution that may help reduce the generation of greenhouse gasses from the production of concrete. They plan to create a closed-loop process to upcycle carbon dioxide emissions: capturing carbon from power plant smokestacks and using it to create a new building material—CO2NCRETE—that would be fabricated using 3D printers. Thus far, the new construction material has been produced only as a proof of concept, using 3D printers to shape it into tiny cones. Once the scale of the printing is brought to construction-appropriate levels, these CO2NCRETE units could be used in buildings.

3D-Printed Biodegradable Fungus Towers. On Mars: Because We Can

Spanish architect Alberto Villanueva of IDEA Architecture has proposed a radical plan for the inevitable future situation when humans need to start using Mars as their next settlement. While the bold plan aims to mimic biological processes to create living conditions suitable for humans, 3D printing lies at the heart of its various stages. Using Martian soil and the fungus mycelium (known for its structural capabilities and the ability to withstand extreme weather conditions), Alberto has proposed a strategy utilizing 3D printing and bioluminescence.

The first stage of the design involves freeing the water from its underground sub-zero state, by dropping 3D printers onto the planet’s surface and constructing sleek metal structures from basalt and ferrous elements found naturally in the soil on the Red Planet. These structures will then harness energy generated by electromagnetic fields to thaw the ice and bring it to the Martian surface, creating a system of water-filled craters and lakes over a period of about 4 to 6 months.

The next step will be constructing atmosphere-building towers, printed from epoxy resins and mycelium. The mycelium will be engineered to draw water from the lakes that have now formed on the Martian surface, increasing the tower’s size organically, and converting atmospheric carbon dioxide into oxygen. Alberto's calculations based on available data suggest that enough oxygen would accumulate in about six months to begin to create a thin atmospheric layer around the planet, and in about two years, this layer would be good enough to allow for human breathing on Mars.

Once humans are set to arrive, he recommends using an organic solution of bioluminescent bacteria to generate light. 3D printers can be calibrated to create an assortment of structures for human use, which are designed to have a 5-year lifespan, after which they biodegrade (decompose naturally), ensuring minimal pollution of the Martian environment.

Having looked at all these projects and many others, it is imperative to understand that even with all the fuss about 3D printing being cheap, as of today the equipment costs are high, which is keeping the proliferation of 3D-printed buildings in check, relatively speaking. Also, the materials that can be worked with using 3D printing as the technology are currently limited, and it will take some getting used to for those living or working in 3D-printed buildings. So, while we will definitely see more 3D-printed buildings and structures in the years to come, an overhauling of the face of the construction industry is still far away.

The World's Largest 3D-Printed Neighborhood Will Rise in Austin