Back in 2011, HRL Laboratories developed an impeccably light material. Now, Guinness World Records recognizes the material as the lightest metallic structure in the world.

The material once made headlines, as a seemingly Photoshopped image showed a segment of the material resting atop a dandelion. 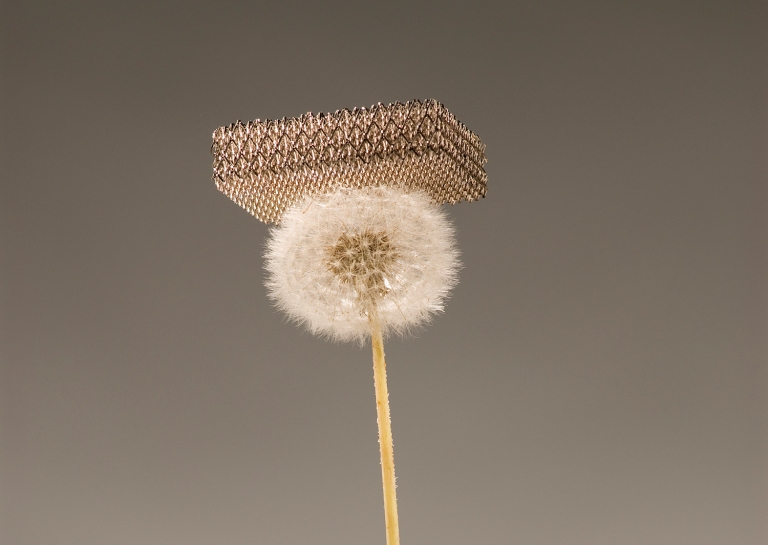 However, the material is shockingly so light that a small section will not bend the fibers in the flower.

The metal microlattice structure developed is now confirmed as being the lightest metal in the world. In perspective, the structure is approximately 100 times lighter than Styrofoam.

"The point of achieving the record for lightest metal was to show the flexibility of the manufacturing process,"

Says Bill Carter, Director of the Sensors and Materials Laboratory at HRL.

"With the same process we can produce a strong and useful material that can be made with the density of aluminum all the way down to well below the density of air (excluding the air inside). Achieving a density at any point between those requires only a small change in the creation process. It can be done quickly, relatively inexpensively, and made to order."

The structure has a surprisingly high degree of customization. This enables developers at HRL to tweak certain characteristics in order to optimize the material for specific uses.

To make a material so light, the engineers at HRL developed an entirely new technique to minimize the amount of material required, while maximizing the space it takes up. The idea originated from a sponge whose density remains rather low. Going forward, the team developed incredibly intricate structure consists of 99.99 percent open volume.

“The trick is to fabricate a lattice of interconnected hollow tubes with a wall thickness of 100 nanometers, 1,000 times thinner than a human hair,”

The scope of the material reaches far beyond being the lightest material. The structure also exhibits some extraordinary properties unlike any metal before it. The metal easily recovers from compression, exceeding 50 percent strain due to its incredibly high energy absorption.

The material will likely undergo further development before it reaches the mass market. The metal is likely incredibly expensive to produce. However, improvements in manufacturing will hopefully enable the structure to be used on a large scale across automotive and aerospace sectors.

SEE ALSO: Cesium - One of the Most Active Metals on Earth!

As always, the techniques will have to be thoroughly refined after extensive research investigating other properties ensures the material is completely stable, reliable and affordable.