A study published this week in Nature’s Scientific Reports reveals the rare discovery of four frogs impressively well-preserved in amber, the oldest-known examples of frogs preserved in such a manner. More importantly, the fossil records provide evidence that frogs existed in forested regions at least 99 million years ago, giving scientists a better idea about when the amphibians could have begun their migration into tropical habitats. 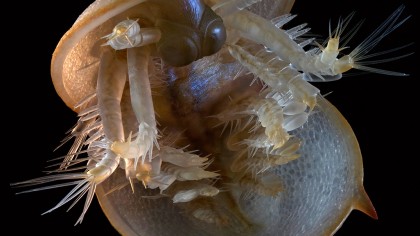 “It’s almost unheard of to get a fossil frog from this time period that is small, has preservation of small bones and is mostly three-dimensional. This is pretty special,” said in a statement David Blackburn, study co-author and the associate curator of herpetology at the Florida Museum of Natural History.

“But what’s most exciting about this animal is its context. These frogs were part of a tropical ecosystem that, in some ways, might not have been that different to what we find today – minus the dinosaurs," he added.

The fossil records of the extinct species, that has now been named Electrorana limoae, were found in northern Myanmar in Southeast Asia. Frog fossils, due to the amphibian's delicate nature, do not preserve well in general and those preserved in amber are notoriously rare.

The only two previous specimens were found in the Dominican Republic and Mexico. Studies found they dated only approximately 40 million and 25 million years respectively, meaning the current discovery now consists of the earliest direct evidence of frogs living in tropical forests.

The amber fossils discovered also had evidence of mosses, plants, aquatic spiders and other insects, as well as marine mollusks. These tree sap remains are now aiding scientists to understand the diverse ecosystems of ancient rainforests.

However, Electrorana was the most well-preserved of the bunch with recognizable features including a skull, forelimbs, part of a backbone and a partial hindlimb, all measuring less than an inch. Unfortunately, many of the details used by experts to discern how a frog is related to others of his species are missing from the fossil bones.

Blackburn said he hopes more frogs in amber will be discovered to provide further details. “We don’t have a lot of single-species frog communities in forests. It seems extremely unlikely that there’s only one. There could be a lot more fossils coming," he explained.

The current bones do provide some insight into Electrorana’s potential living relatives, however, they are confusing. The fossil frog shows similarities to fire-bellied and midwife toads, species living in temperate ecosystems inconsistent with the tropical ones known to be the Electrorana’s home.

The fossils are now held in the Dexu Institute of Paleontology in Chaozhou, China. A 3D-printed replica of Electrorana limoae can be found at the Florida Museum and additional models of the fossils can be seen at 3D data open-access repository Morphosource.

The research was funded by the National Natural Science Foundation of China, the Fundamental Research Funds for the Central Universities, the National Geographic Society, the Chinese Academy of Sciences and the University of Florida.

NASA Once Sent 2 Bullfrogs to Space for... Science!