World's Smallest Computer is Dwarfed by a Grain of Rice

Engineers took on IBM's challenge of making small computers by building one 1/10th the size of the previous record holder.

IBM threw down a challenge in March of this year when they built what they claimed was the world's smallest computer. The IBM computer is smaller than a grain of rock salt, but computing engineers around the world decided they'd attempt to go smaller. The challenge also didn't sit well with a team at the University of Michigan who previously held the record for world's smallest computer.

After months of development, the Michigan team announced they've bested their corporate challengers. The computing device they created measures only 0.3 mm on a side. A grain of rice dwarfs the technology. 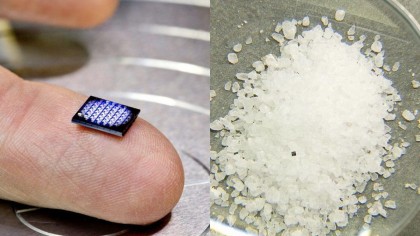 During the development process, the University of Michigan researchers had to redefine what qualifies as a computer -- especially in light of IBM's claims. Earlier systems like the 2x2x4mm Michigan Micro Mote retain programming and data even when they're not powered by external batteries. However, the system created by IBM does not keep programming and data whenever it's removed from power.

“We are not sure if they should be called computers or not. It’s more of a matter of opinion whether they have the minimum functionality required,” said David Blaauw, a professor of electrical and computer engineering. Blaauw led the development of the new system together with Dennis Sylvester, also a professor of ECE, and Jamie Phillips, an Arthur F. Thurnau Professor and professor of ECE.

However, if IBM wanted to qualify its device as a computer, the Michigan team would play by those standards. The Michigan engineers got to work on developing the computer roughly one-tenth the size of IBM's. The computing device needed more than just RAM and photovoltaics. It also needed a processor, wireless transmitters, and receivers. The device was too small for a conventional antenna, however, so the team developed a way for it to receive and transmit data with visible light. The base gives light for both power and programming while also taking in the data.

The team also needed to induce current through incredibly tiny circuits, so the team used light from the base station and the device's transmission LED to give it power.

“We basically had to invent new ways of approaching circuit design that would be equally low power but could also tolerate light,” Blaauw said.

The system itself can be used for a number of different purposes, and other Michigan professors are already theorizing how they could use it in their fields. Gary Luker -- a professor of radiology and biomedical engineering who frequently collaborates with the computing team -- said he plans on using the new tiny computer in his tumor research. He said he wants to use the computer to track tumor temperatures and further explore theories surrounding how temperature affects cancer treatments.

For Blaauw and his team, however, the applications of these incredibly small systems still comes as a pleasant surprise.

“When we first made our millimeter system, we actually didn’t know exactly all the things it would be useful for. But once we published it, we started receiving dozens and dozens and dozens of inquiries,” Blaauw said.

The Michigan's previous record holder -- the Micro Mote -- was used in everything from tiny snail studies to cancer research to monitoring oil reservoirs. Small computers can radically shape how researchers gain access in certain fields and tricky or difficult situations.