World's Smallest House is Too Small for Mites

New technology is giving an entirely different meaning to the "tiny house" trend. A team of French nanotechnologists has made the world's smallest (and quite possibly cutest) house.

Before this project, lab-on-fiber technology lacked robotic actuators for nano-assembly. This made it nearly impossible for engineers to build microstructures smaller than technology allowed. However, the new technology puts the sensing elements on the end of fiber tips, giving engineers a clear sight line of different components and better visuals on how to adjust them.

"For the first time we were able to realize patterning and assembly with less than 2 nanometers of accuracy, which is a very important result for the robotics and optical community," said Jean-Yves Rauch, an author on the paper.

The French team decided to conduct this nano-assembly in a vacuum chamber and combined a focus ion beam with a tiny robot and a gas injection system. According to Rauch, those elements were critical in deciding on the first object to be built to test out the technology.

The team compared the process of making a microhouse to that of building a giant dice from a piece of paper but with significantly more impressive tools. The ion beam cuts the silica paper of the house, and then, once everything is in place, the gas injection system 'glues' everything together.

"The focused ion beam is used like scissors to cut or score the silica membrane ‘paper’ of the house," the American Institute of Physics, which publishes the aforementioned journal, explained. "Once the walls fold into position, a lower power setting is selected on the ion gun, and the gas injection system sticks the edges of the structure into place. The low-power ion beam and gas injection then gently sputters a tiled pattern on the roof, a detail that emphasizes the accuracy and flexibility of the system."

The ion gun needed to focus on a space just 300 micrometers by 300 micrometers in order to send ions into the fiber membrane. The task was far from easy, the researchers noted. 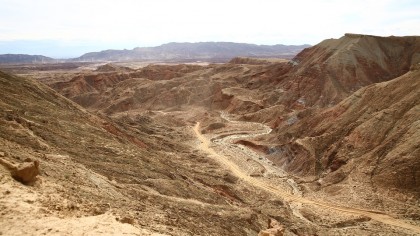 "It's very challenging to pilot the robot with high accuracy at this cross point between the two beams," Rauch said.

The new nanorobotics system will allow the team to further push the boundaries of nano building and construction. They want to keep building smaller and smaller structures with an ultimate goal of getting it to a space of only 20 nanometers by 100 nanometers in diameter.