For the 10th anniversary of the launch of the Samsung Galaxy S series of phones, Samsung made several major product reveals at their Unpacked event today.

For the tenth anniversary of the release of the Samsung Galaxy S handset, Samsung made several major announcements at their Unpacked event in San Francisco, California today, including product launches, technology showcases, and demonstrations from their 2019 product line.

The showstopper for the event was obviously the unveiling of their long-awaited foldable smartphone + tablet, a device they call the Galaxy Fold. There's enough there that it deserved its own write-up, which can be found here.

The rest of the event was dedicated mostly to the Galaxy S10 lineup being released this year and it features several major improvements over last years S9 models.

The Galaxy S series phone is always a highly-anticipated announcement, seeing as it is one of the most popular handsets in the world, and the Samsung Galaxy S10 series doesn’t disappoint.

The announced release date for all but the Samsung Galaxy S10 5G is slated for March 8th.

The Galaxy S10 5G has no release date as of yet, but will likely be released once the 5G roll-out takes shape later this year, though it has been announced that Verizon will be the first to offer the Samsung Galaxy S10 5G handset in the United States.

The flagship phone for Samsung, the Samsung Galaxy S10 features a 6.1-inch QHD+ Dynamic AMOLED screen with curved edges and is billed as the most color accurate phone to date. 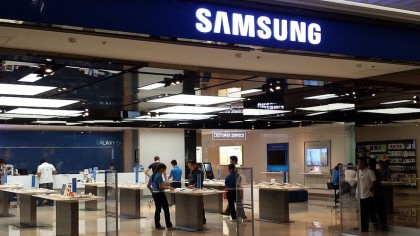 It sports three camera lenses on the back, a standard 12-megapixel lens that switches between f/1.5 and f/2.4 apertures, a 12-megapixel telephoto lens, and a 16-megapixel f/2.2 ultra-wide lens that can produce extra-tall panoramic photos. There’s also a front-facing 10-megapixel camera for selfies and video calling, streaming, and the like.

Behind the screen, there’s 8GB of RAM and 512GB of storage capacity, as well as a high-end performance chipset to power it all. It’s battery packs 3,400mAh with software performance upgrades that promise 25% longer battery life by managing app processor usage in the background.

The phone also introduces an ultrasonic fingerprint scanner built into the display to unlock the phone, though not a 3D facial recognition feature like many had been hoping for.

Performance wise, the Galaxy S10+ is a bit more powerful with 12GB of RAM, 1TB of storage (upgradable to 1.5 TB with a MicroSD card), and a larger battery totaling 4,100mAh.

A new addition this year, the Samsung Galaxy S10e—the ‘e’ stands for ‘essentials’—hopes to capture a lot of what makes the Samsung Galaxy S10 line great at a more affordable price point. It has a smaller screen than the S10, a 5.8 Full HD+ AMOLED display, which is flat rather than curved like its older siblings.

It drops the telephoto lens on the back, leaving you with the 16-megapixel ultra wide lens and the standard, variable aperture 12-megapixel lens.

It comes with either 6GB of RAM or 8GB, up to 256GB of storage, and a smaller, 3,100mAh battery. It also doesn’t include the ultrasonic fingerprint scanner and instead has one on the side of the handset.

The most luxurious model in the series this year is the Samsung Galaxy S10 5G, which has a huge 6.7-inch display, 4 rear-facing cameras, and a 4,500mAh battery.

As the name suggests, the Galaxy S10 5G is Samsung’s first 5G handset and so it has some extra features to take advantage of the upgraded network. The additional camera lens on the back is actually a 3D depth sensing lens used for facial recognition and AR/VR applications deliverable through the upgraded 5G network.

The specs aren’t as impressive as the Galaxy S10+, only registering 8GB of RAM and 256 GB of storage (upgradable with a MicroSD card), so they are probably counting on a lot of cloud processing and storage utilizing 5G connectivity.

Samsung also showcased some of its updated wearables lineup at Unpacked.

Samsung's answer to Apple’s AirPods, the Samsung Galaxy Buds, promise to provide 5 hours of call time, 6 hours of music, and voice control via Bixby, which can extend to some features of the paired Samsung device itself. The audio tech is provided by Harman, so you can expect solid sound quality from these.

The case for the Galaxy Buds features wireless charging and features two different microphones. The Buds default to the outer microphone, but if it detects a lot of ambient noise, it will switch to an inner microphone that filters out much of the outside noise and focuses on your voice.

Samsung Galaxy Watch Active (No Price Yet, No Release Date Yet)

An improved, sporty version of Samsung’s Galaxy Watch, the Galaxy Watch Active has a round face, is water resistant to a depth of 50 meters, includes a heart rate and stress monitor, as well as being able to track your sleep, and it’s built out of lightweight aluminum. With customization options, Samsung says that the Samsung Galaxy Watch Active will have over 60,000 unique watch faces.

Running the Tizen base OS, it is modified to use Samsung’s One UI, a new interface for the watch that can access apps and receive notifications.

The Galaxy Fit weighs only 23g, so its one of the lightest fitness trackers out there and is water-proof up to 50 meters. It features a slender Super AMOLED display and Samsung claims the battery can last as long as one week without charging.

The Galaxy Fit E should do many of the same things as the Fit but is going to feature lower-end hardware and performance as compared to the Galaxy Fit, though this should make it much cheaper overall. It also weighs in at 15g, so be careful taking it off in a sturdy breeze, you might lose it.