Construction workers in the Flatiron district in Manhattan, New York unearthed a missile-looking time capsule from the 1980s. The discovery wasn't related to any bomb threats or any dangers of such nature. It was simply an attempt to surprise future New Yorkers with memorabilia from the past.

A time capsule bomb from the 1980s

Its discovery resulted in the closure of the 21st Street in Manhattan as it was initially thought of to be a war missile. However, after the NYPD bomb squad poked into what's inside the missile-looking device, they confirmed that it wasn't a threat at all. Despite its war missile appearance, the shell didn't quite contain hazardous explosives. Instead, it is stuffed with photos and paper letters all the way from the 1980s.

Dubbed as the "time capsule", the World War II practice bomb was purchased by John Argento from a military store on Canal Street in Manhattan. Argento then displayed the war item on the ceiling of the prominent nightclub he owned known as the Danceteria. The famous nightclub was operational from 1979 until 1986. In 1984, Argento and his business partner decided to convert the bomb into a "time capsule" by getting the clubgoers to fill it with paper letters and photographs. "It was a great excuse to have two great parties", said Argento. He threw one party for everyone in the club to fill the time capsule with their memorabilia. Argento then hosted another get-together to bury the treasure bomb under a gravel parking lot outside of the club. They wanted people from the distant future, 10,000 years from the time of its burial to be exact, to see the content of the time capsule. 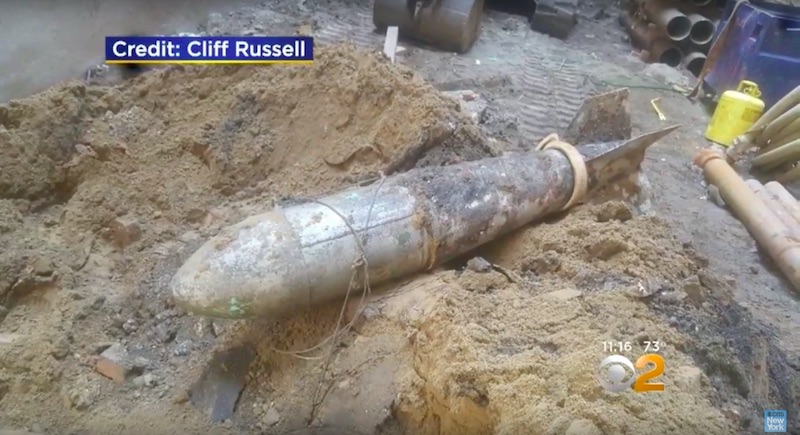 Although it was quite an event to behold, Argento said that they have forgotten about it for some time. However, about ten years ago, Argento went back to check on the treasure only to find that the burial spot had already been surfaced with concrete and consequently forgot about it again. Fast forward to a few days ago, the NYPD bomb squad got in touch with Argento to enquire about the content of the item. The authorities gave the all-clear after seeing what's inside the bomb but are holding onto it for a few more days until a thorough investigation has been conducted.

The idea of the time capsule is one to be admired. There's nothing more nostalgic about seeing images of certain eras in the past. Especially in the 80s when big, messy hair was a thing and matching neon-colored apparels were all the rave. Imagine how the cyborgs and humanoids 10,000 years from now would react should the time capsule stayed buried for that long. Unfortunately, the NYPD officers reported that the content of the shell was left mushy and damp as water has seeped into the item over time.

Apparently, burying treasure items underground is not the wisest method to preserve important souvenirs or valuables. To find out how to effectively preserve your valuables, have a look at this Smithsonian preservation techniques.