Sitting 100 feet below the London tube station in Clapham is a WWII bomb shelter and it has now been turned into a subterranean farm growing mini vegetables, salads and herbs thanks to chef Michel Roux Jnr. 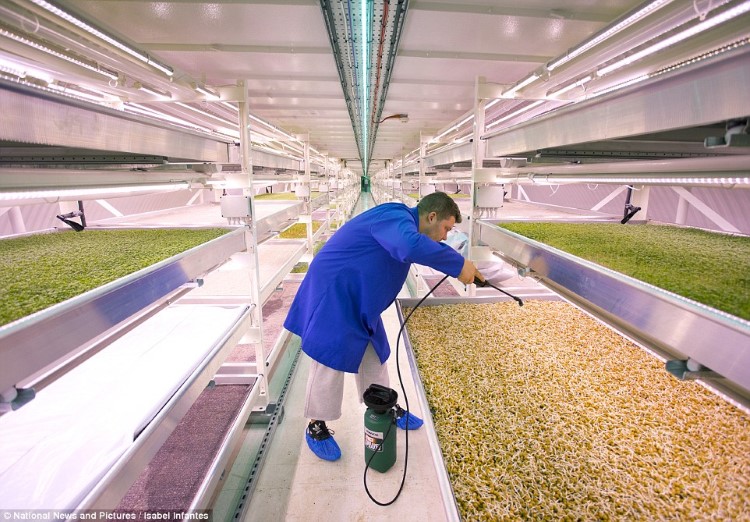 Michel Roux Jnr is a Michelin starred chef and he along with two entrepreneurs has launched the brand Growing Underground. Phase one of the project is going to start with the growing of rocket, parsley, radish, pea shoots, mustard, red amaranth and celery.

So far the team has managed to raise $750,000 in funds to start up the Growing Underground project. The plants will be grown using a hydroponic system which will circulate the water with nutrients through the trays of plants which are sitting on hemp beds. The famers plan on using water that seeps down through the land to the sump rooms which are running alongside the tunnels. This water will then undergo a purification process and will feed the plants.

Of course there is the issue of lack of sunlight when growing plants in a subterranean farm. The team has overcome this by installing LED lights in banks that run on green energy.

The old World War Two tunnels were built to provide protection to families from flying bombs in 1940 and 1942, these rained havoc on London during the war. The North tunnels in Clapham opened in July 1944 and they were then equipped with medical posts, sanitation, bunks and kitchens and were able to take in up to 8,000 people and provide them with safety.

The tunnels are 12 storeys underground and have remained unused ever since the war ended. The depth of the tunnels means that the temperature keeps at 16 centigrade year round so crops can be grown throughout the year as there is no worry of frost. The scheme was launched three years ago by Steven Dring and Richard Ballard, both of whom believe that it may be the answer to helping with urban population growth and the pressure it brings, while at the same time producing healthy food which can be on the table in as little as eight hours of being harvested.

Michel Roux Jr joined the team and has become a director and will have the job of advising the team on the selection of crops along with product design. The crops will be grown in an environment that is sealed and which has one of the latest ventilation systems along with an advanced irrigation and lighting systems. The whole aim is for the subterranean farm to produce crops and have the minimal impact on the environment. The first commercial client to take produce will be County Supplies London and they supply restaurants in the Covent Garden Market. Eventually the project will expand to have 20 people working on 2.5 acres in the tunnels.