You Can Now Buy a Wireless Charging Pad for Your Drone

WiBotic, a Seattle-based startup developed the system to speed up the efficiency of commercial drones, as well as, ramping up the autonomy of UAVs.

Wireless charging pads or charging stations are commonly associated with smartphone technology. However, a start-up in the United States is taking that concept to the skies.

WiBotic, a company in Seattle, has created a wireless charging pad for a wide range of drones, from industrial to smaller, commercial UAVs. Additionally, the company built an onboard charger that weighs just 1.6 ounces (45 grams). The mini-circuit board aids operators of small drones use wireless power without the extra weight.

“Battery charging is one of the biggest challenges facing the robotics industry, and reliable wireless power has opened a world of fabulous possibilities,” said Ben Waters, CEO of WiBotic to Robotics Trends.

The charger, called PowerPad, is a part of the Wibitoic’s strategy to make drones entirely self-sufficient, by providing a system which allows the aerial vehicle to juice up as they go about their business without human involvement.

“We built the PowerPad as a fairly simple, enclosed, weather-resilient system that gives folks a piece of infrastructure that solves their power problem right off the bat,” WiBotic CEO Ben Waters told GeekWire.

PowerPad works by powering a drone wirelessly at short range from the pad’s transmitter to the charger’s receiver, which can be connected to AC power, or to a DC source like a solar powered storage cell. This transmission is then converted into electricity for the drone’s batteries.

“WiBotic PowerPad works in conjunction with the separate WiBotic onboard charger – a small circuit board and antenna that easily mounts on the drone itself. The Wibotic software can be used to configure and optimize the charge rate for any battery onboard the drone,” explains the company in a press release.

It’s a change from the usual practice of switching out batteries by hand or plugging it into a direct-contact charging set-up. It takes one to two hours for the 100-watt PowerPad to charge a drone fully. Size-wise, the pad can power up a drone up to the size of a DJI Inspire. For more substantial industrial drones, charging sessions would take between 3 – 5 hours. The plan is to develop larger versions of PowerPad in the future.

The 3-by-3-foot Pad resembles a metal-based table with a thick plastic topper, and the cost ranges from “couple of thousand to several thousand dollars,” dependent on how weather resilient the pad has to be. 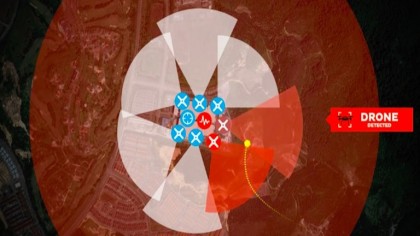 Drone Tracking System Detects and Shoots Drones from the Sky

Available now for purchasing, the PowerPad can be mounted on either rooftops or other elevated structures and placed inside warehouses and factories.

The technology could also be useful in industries like security where rooftop drones need to be quick responders. Wibotic claims their pad could be efficient on oil rigs where monitoring gas leaks, in hard to reach areas quickly is a priority.

The startup will be taking their product to the upcoming Commerical UAV Expo in Las Vegas from October 24th to 26th.