You Can Now Buy Your Own Iron Man Suit from Selfridges for $443,000

Richard Browning is selling custom-made versions of his famous personal Iron Man suit through the luxurious UK based store.

Luxury goods store Selfridges is now stocking custom Iron Man suits for about $443,000. The suit has been designed by Richard Browning under the umbrella Gravity Industries.

Each suit comprises of 5 mini jet engines, that allows you to hover for about four or five minutes before needing to refuel. Earlier this year Browning tested the suit at Europe's largest zip line in Wales.

The British inventor said he reached speeds of 90 km/h, though the Selfridge suits come with a recommended limit of 50 km/h. The suits advertise that they are able to reach an altitude of 3600 meters, but Browning usually demonstrates the suit close to Earth for obvious safety reasons.

The suit which has a large amount of black 3D printed parts on it, can’t avoid comparisons with the one worn by Robert Downey Jr. when he played superhero Iron Man. Browning marked the launch of the suits by flying above a closed street outside Selfridges.

"This consumes about four liters a minute in the hover [position] so you can fly for three or four minutes quite easily and we have got another version — certainly on a cold day when you get more thrust, it'll fly for about nine minutes," he said. Hovering is a very energy intensive activity for flying vessels. 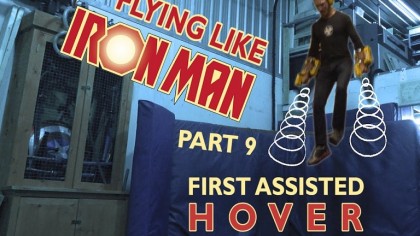 "That's something we're looking to improve, but it's the inevitable consequence of flying without wings,” Browning added. If you have a cool half a million, you can check the suits out in store and even try out a virtual reality version of the suit.

Browning wowed a small crowd gathered outside the luxurious store as he flew up and down the street with apparent ease. "If you watch this as an audience member, you probably get exposed to more warmth than I do as the pilot," Browning said after the Selfridges demonstration. "It's actually surprisingly calm and not very violent. It's very passive and gentle when you're flying it."

Browning and the suit hold the Guinness World Record for the fastest speed in a body-controlled jet engine power suit. If you're wondering how many competitors there could possibly be in such a category, the answer is one.

Browning is the first title holder. The record stands at flying over 32 mph for a distance of 100m. Though if someone buys a suit, perhaps the record won’t last long.