Google recently released an update to their mapping technology, by combining millions of pictures and other data collected out in the nether, they were able to construct a detailed diagram of our neighboring planets.

Thanks to pioneering spacecraft like the recently defunct Cassini, we now have a significant amount of data to sift through regarding unexplored planets and satellites. Google Maps Space has recently put this information into a visual format. Namely, their new set of maps that show a variety of planets, dwarf planets, and moons. 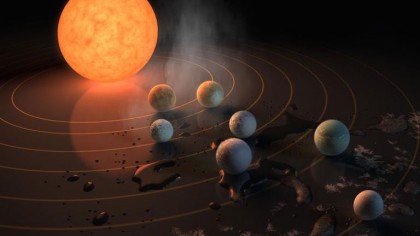 “Twenty years ago, the spacecraft Cassini launched from Cape Canaveral on a journey to uncover the secrets of Saturn and its many moons,” wrote Google in a blog post.

Cassini recorded and sent nearly half a million pictures of its explorations back to Earth during its time in service, allowing scientists to use this data to reconstruct aspects of our solar system down to minute details. Now, the public can explore planets like Pluto, Mars, and Enceladus, where Cassini found water beneath the moon’s crust.

“Peer beneath the thick clouds of Titan to see methane lakes. Inspect the massive crater of Mimas – while it might seem like a sci-fi look-a-like, it is a moon, not a space station,” continued Google.

The maps themselves were illustrated by astronomical artist Björn Jónsson, who assembled accurate images of Europa, Ganymede, Rhea, and Mimas using photos from both NASA and the European Space Agency. There are about a dozen worlds to venture into on the site, including a look at the International Space Station (ISS).

Included in the imagery are labels which allow viewers to choose what they want to look into further, such as Valles Marineris on Mars – the largest canyon in the Solar System or even delve further into one of the Moon’s many craters. Another sight to see is the Olympus Mons volcano on Mars – the tallest mountain in the solar system.

Initially, Google experienced a few hiccups when the maps were first released, including labels being off by about 180 degrees. A Twitter user pointed out the errors to the company who quickly responded, though it has yet to be alleviated, they are working on it.

Probably the most exciting part of these new maps is the access to ISS, where the viewer has a panoramic view of what it’s like to sit in the cockpit of the largest man-made satellite to orbit the earth. The pictures were taken around February 2017 and include prompts attached to various areas within the space, once clicked they provide information about the surroundings.

Clicking on the button labeled ARED (Advanced Resistive Exercise Device) will bring up a detailed explanation of the workings behind this piston-driven vacuum system that help astronauts perform free-weight exercises while in zero gravity.

Beyond the ISS you can travel to Saturn’s moons Titan and Iapetus, as well as the massive Ganymede in Jupiter’s orbit.

The interactive experience is yet another notch in Google’s interplanetary mapping technology which includes Google Sky, which allows the user to view the thousands of stars scattered across our sky. The site maps out and labels all of the constellations and also features a few stunning images captured by the Hubble telescope.

Check it all out here, or like Google said: “Grab your spacesuit and check out the rest of this corner of the galaxy that we call home.”