You Can Now Ride Your Very Own 'Tron' Light Cycle

The Tron Light Cycle, probably one of the most iconic scenes and vehicles in the original and reloaded versions of this sci-fi classic. Did you know you can now buy and ride your very own one? No, we'll let us tell you more about it. Tron was a groundbreaking film in its day, which to be fair hasn't aged too well. This was rebalanced when Tron: Legacy was released in 2010 with a visually rich environment and the fantastic soundtrack from Daft Punk.

So without further ado let's take a quick jump into the Tron universe and bathe in the glory of the Light Cycle.

If you haven't seen either the 1982 original version of Tron or for that matter the reboot a couple of years ago you really need to question your priorities in life. The original is one of the most iconic and well-loved science fiction films of all time, though dated, it still inspires young and old. The reboot Tron: Legacy really does the original justice and is a visual and audio extravaganza. 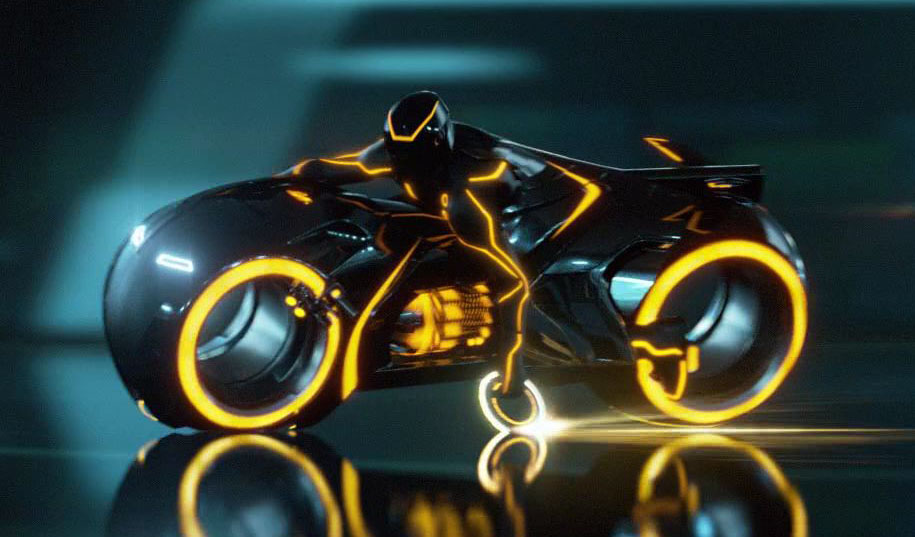 The story concept, put simply, revolves around a computer hacker and arcade owner, Kevin Flynn. Kevin is digitally broken down and abducted into the data stream of the game by a villainous software pirate known as the Master Control. Here he is forced to participate in gladiatorial-style games within the 3D graphical world of the game. His only chance of escape is with the help of a heroic security program, Tron. Let's just say it might be the ultimate gaming experience.

The modern reboot picks up where the original ends and follows the story of Flynn's son. Sam Flynn, also a tech savvy individual,  embarks on a quest to find his long-lost father. He finds himself pulled into the same world of violence and gladiatorial battles where his father has been trapped for the last 20 years.  He finds his father and they embark on a life and death journey across the cyber universe to stop the malevolent program CLU in his plans to invade the real world. That's probably enough of a teaser for you, go and check out the film for yourself!

Apart from the, somewhat, dodgy lycra suits there is a plethora of fantastic vehicles and landscapes in the films. Amongst them is the iconic Tron Light Cycle. 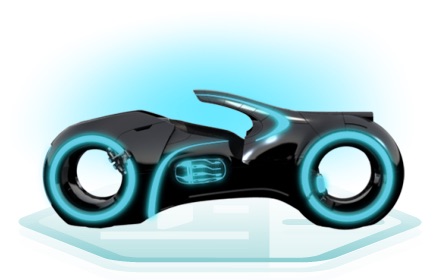 The original 1st generation bikes resemble real world motorbikes that are driven by programs on the game grid. The bikes are "rezzed" or formed from a baton held by the user who is encased in the bike when activated. The bikes' colors are defined by the colour rod that generates it. These bikes are incredibly fast and leave behind a permanent light wall. Think of the game "Snake" but in 3D and with "real" consequences on-collision. These bikes can only move in straight lines and turn at 90 degrees. Collision leads to "derezzing" of bike and rider, effectively a digitally fatal incident. Outside off the grid, these bikes can be used normally without the hazardous light wall left in their trail.

In the modern re-imagining of the series, the 5th generation Tron Light Cycle is effectively an upgrade of the original to make them more resemble a real-world motorbike. The main differences being the lack of canopy so obvious in the original film. The new 5th generation also sports headlights to enable the riding "programmes" to easily navigate dark environments. The wheels are effectively exactly the same. According to the lore, these bikes are powered by pure liquid energy. Another key difference is the ability to toggle the light ribbons that spew out the back of the cycles.

The vehicle's speeds can be attenuated by pushing the front or rear ends of the bike apart. The front wheel is also fixed, so steering is accomplished by tilting the machine.

Did you mention owning one?

Yes, we did! It's not cheap but certainly worth considering if you're a Tron fan. These ultimate pieces of memorabilia can be yours for around $55 grand and are built by the same guys who built the Batpod replica. These real-world Tron Light Cycles feature massive dual hubless wheels, carbon fibre and fibreglass bodies and of course a plethora of neon lights. Created by Parker Brothers Concepts these bikes are built to order and will make you the envy of your friends and family.

They are powered by A/C induction motors with lithium ion batteries and are generally pretty cool looking. There is a waiting list as each is built by hand, but that shouldn't put you off owning something so unique. Parker Brothers Concepts say:-

"COLOR COMBINATIONS ARE ENDLESS, THE THRILLS ARE ENDLESS, BUT THESE NEW MOTORCYCLES ARE NOT. NOW IN LIMITED PRODUCTION  (LIMITED TO JUST 25 BIKES FOR 2017)  SO GET ONE BEFORE YOU GET LEFT BEHIND." 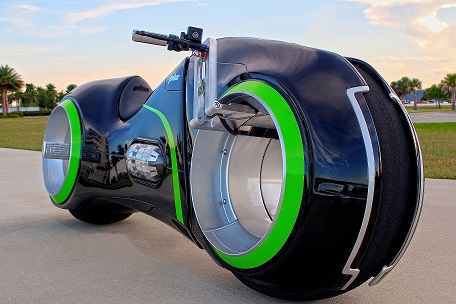 Don't have $55 thousand dollars to spare? Don't worry you can make your own from LEDs and a bike. Visual artist Mike Gamble has created a unique effect similar to those in Tron.

He used strips of LEDs to attached to the rear wheel of a mountain bike. If you fancy trying it out for yourself the build isn't too difficult. Simply attach the strip lights to the wheel and connect them to a rechargeable battery.

You can even take it to another level and add programmable LEDs with a microcontroller. Of course, this doesn't quite meet the design of an actual Tron Light Cycle but it's a still a fun idea nonetheless.

So there you go, the Tron Light Cycle. Will you be buying your very own "real" one? Perhaps you fancy modding your mountain bike to impress your friends and co-riders? Good choice, we think you'll be presently surprised. Perhaps you're lucky enough to already own one, if so let us know about your experience. Happy riding!